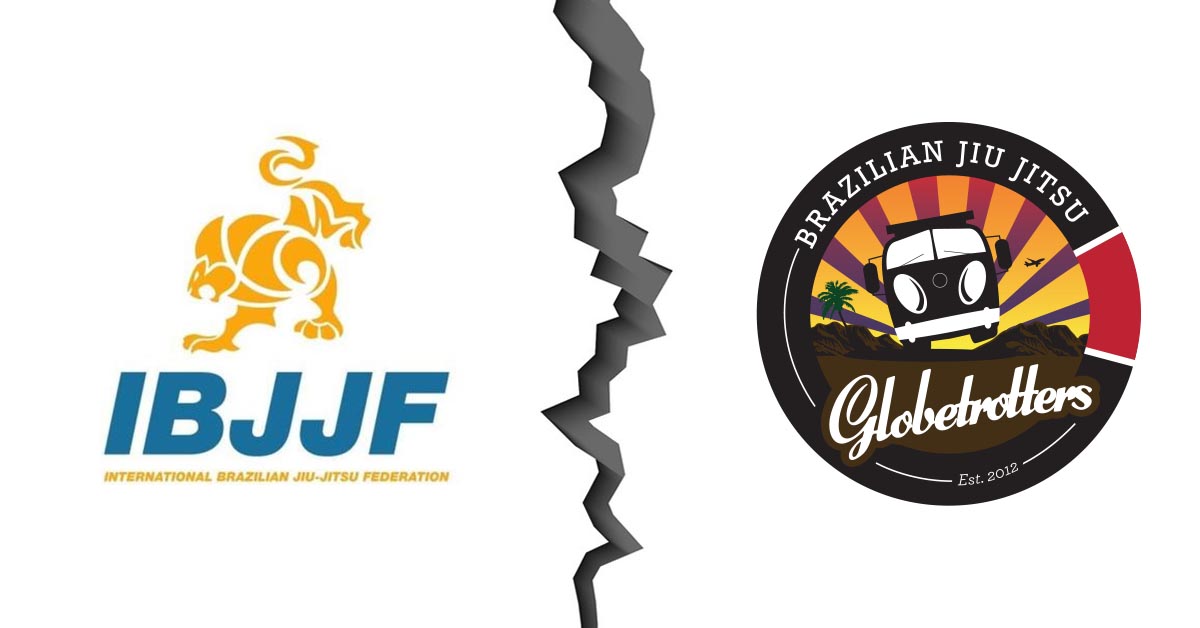 Brazilian Jiu Jitsu Globetrotters have been growing rapidly over the last few years. Starting out as a small affiliation of Jiu Jitsu practitioners who had trouble signing up for IBJJF competitions due to issues with politics, it is now turning into a world wide community of Jiu Jitsu travelers, a gi brand, couchsurfing service and one of the most active organizers of exotic training camps around the world. They are also the biggest Jiu-Jitsu affiliation network with close to 750 affiliated teams worldwide. They do not charge any money for their affiliation, unlike the big associations like Gracie Barra, Alliance or Checkmat etc… 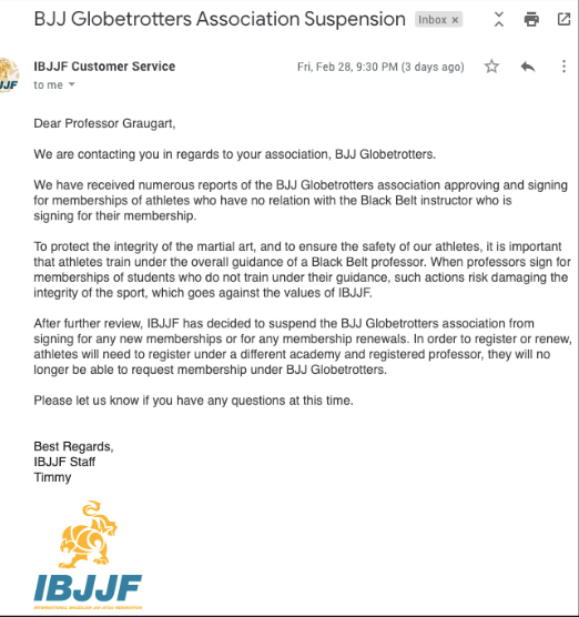 Affiliating with a Big Name BJJ School: Worth It?

As a result, Graugart issued the following statement:

Dear BJJ Globetrotters,
A little over three days ago, I received an email from the IBJJF, letting me know that BJJ Globetrotters, as an association, has been suspended from their federation. The accusation is that we have been approving and signing for athletes that have no relation with the signing black belt instructor. According to them, we are going “against the integrity of the martial art and safety of the athletes” since “it is important that athletes train under the overall guidance of a Black Belt professor”.
Naturally, I immediately responded to their email:
We sign IBJJF forms for all our members to be able to compete, just like any other affiliation in the world.
Our team signing the forms are high level, highly decorated black belts with decades of combined experience in the art.
We verify the belt ranks of anyone we sign for with their day-to-day instructors. For black belts, we require rank confirmation from five black belts. Last week, we announced that all members must have verified their belt ranks with www.beltchecker.com, which will ensure even more trustworthiness of their rank, as well as allow us to always keep up-to-date with any controversy around their promotions, should this arise.
This is not different than how pretty much every major BJJ affiliation around the world works. The head black belts who sign the forms for their affiliate academies’ members have, in most cases, no more relationship with the athletes than we do. In fact, our community is very tight knit, as more than 1,800 of our members meet around the world at our camps over 10 times every year. Everyone at all levels train hard, network and make friends. On a regular basis at the camps, I see and train with countless of the athletes I have signed IBJJF forms for. These are people I consider great friends and valuable training partners. Some of those who do not have instructors at home, choose to receive their belt evaluations from the combined opinions of the camp instructors. But apparently this is not enough to qualify as “overall guidance” from my and the other black belts’ side.
At the end of the day, the main difference between BJJ Globetrotters and any other large affiliation is, that we charge no money for what we do.
I have to this date still not received a reply to my email, but all our members’ IBJJF memberships have been abruptly cancelled and we are getting a lot of emails from concerned athletes with upcoming competitions, so we can not postpone this announcement any longer.
I am deeply sorry on behalf of our many hundreds of athletes around the world who are actively competing for BJJ Globetrotters, producing fantastic results at all levels, from white to black belt, from amateurs to professionals. While we are not an affiliation in the traditional (IBJJF-)sense, we ARE a community of highly passionate practitioners who believe that training relationships in Jiu Jitsu should be based on friendship, not business. That everyone should be treated equal on and off the mats. That people should be allowed to train with who ever they want. And that access to competition should not be based on contractual agreements with anyone at the top of an imaginary hierarchy based on pieces of tape on cotton belts.
While IBJJF is a private, for-profit company that can make whatever rules they like, I don’t think anyone should have monopoly on how a BJJ affiliation is defined. For those who agree that what we do also qualify as one, we are in fact the biggest in the world, with more than 750 registered academies. And I’m incredibly proud that we are so many who stand up against common perception of how things are “supposed to be done”. We’re not going away any time soon.

If you are affected by this recent decision by IBJJF, I suggest that you email them directly on ibjjf@ibjjf.com and let your opinion be heard. I’ll keep doing the same for you.

BJJ Eastern Europe has interviewed the founder Christian Graugart, a black belt from Copenhagen, Denmark also known for being the author of “The BJJ Globetrotter”, about the success of his project:

How did BJJ Globetrotters start back in 2012?

Originally, I just needed to come up with a name in order to register our academy with the IBJJF so me and my guys could compete in the Europeans in Portugal. The name we wanted to use was already taken, so I just wrote “BJJ Globetrotters”, inspired by the name of my blog from when I traveled around the world the year before. A few guys on the team suggested we made team patches for the trip and after a friend of mine had drawn the design I came up with, I received a bunch of emails from people who asked if they could have one and also if they could sign up for the Europeans with the Globetrotters, since their own academy wasn’t registered. One thing took the other and shortly after, we had hundreds of people on board who needed help competing at the big IBJJF events.

How have you seen BJJ Globetrotters evolve since the beginning?

I never had any sort of master plan with BJJ Globetrotters and I still don’t really know where it is going, but it quickly grew into a vehicle for me to channel my passion for bringing ideas to life. From being more of a “team” in a semi-traditional sense, we pretty early on evolved into a world-wide community of people with a shared interest in politics-free Jiu Jitsu traveling and networking. This has spun off a number of things such as our training camps, super light weight travel gis, Matsurfing.org (a couchsurfing-like service for BJJ), sponsorship of a growing number of amazing travelers and last but not least, countless of new friendships, connections, meetups, opportunities and experiences for our 2500+ members and 150+ affiliated academies.

None of this was ever planned, but I have kept a strong focus on building everything on a foundation of good karma and a belief that everyone is equal both on and off the mats. The values of the team were defined early on and can never be changed:

All I’ve done so far is basically just to stay 100% true to these values in everything I do and then tag along for the ride, watching everything unfold almost by itself. It’s been a beautiful experience and I’m excited to see where it will be going in the future.