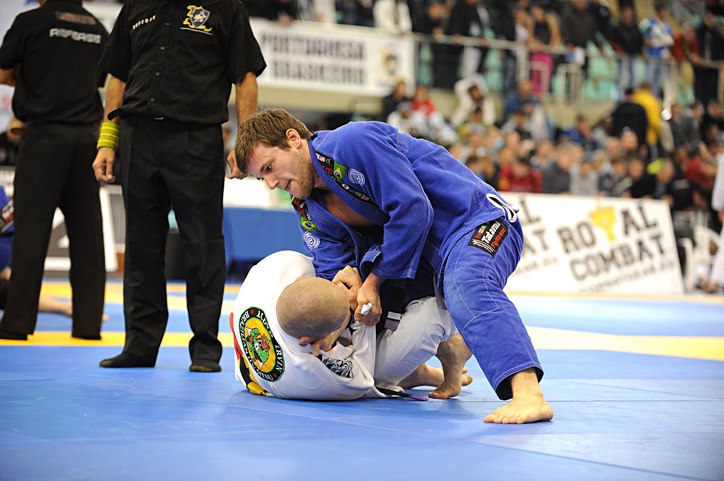 The International Brazilian Jiu-Jitsu Federation (IBJJF), Abu Dhabi Combat Club (ADCC), and Eddie Bravo Invitational (EBI) are three of the biggest organizations that host multiple BJJ and grappling events every year. Each has its own distinct rules that set them apart from the other. We will try to differentiate these drastically different rulesets below based on the time limit, point system, and legal positions and submissions for the adult divisions of these events.

The ADCC point system is very different from the IBJJF system. The ADCC does not award points in the first half of a match.

The ADCC also penalizes the competitor with a penalty point for doing certain actions like pulling guard and for refusing to engage or being passive.

In the ADCC, slamming is allowed for the sake of escaping submissions, but at any other time, slamming is illegal. Spine locks such as the Twister is also illegal.

EBI matches are 10 minutes, with a focus solely on submission. If the match does not end in the allotted 10 minutes, it goes into the overtime rounds. The overtime time limit is 2 minutes per set. An overtime round is composed of 2 sets. There is a maximum of 3 rounds or 6 sets of exchanges in overtime. Overtime rules will be explained more in-depth in the point system section below.

There is no point system in EBI rules. What sets it apart from other events is the overtime system. As mentioned earlier, If no submission is scored for the entire 10 minutes, the match will go into the overtime round. In the overtime round, either of the competitors will flip a coin. The winner of the coin flip will select from 2 positions:

The goal for both positions is to get a submission for the attacker and to escape from the position for the defender. The winner of the coin flip will also dictate who will start first as the attacker. After the exchanges, they will switch positions; the previous attacker will become the defender and vice versa.

In the two exchanges:

All grappling moves are legal in EBI including spine-locks.

With these events, we can see how differently the game can be played based solely on the changing ruleset. With more events from different organizers consistently popping out, watch out for newer and more exciting ways to play the sport of Brazilian Jiu-Jitsu!