How Training With Heavyweights Will Benefit Your Jiu-Jitsu 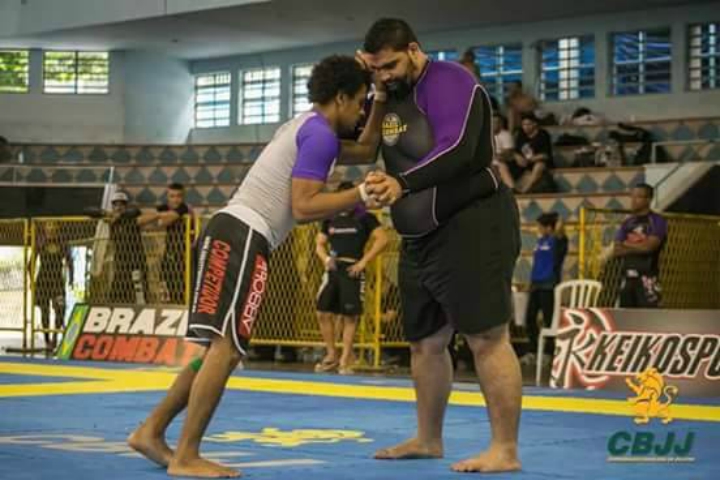 “If you are not comfortable fighting someone 50 pounds heavier than you, there is something wrong with your Jiu Jitsu. – Rickson Gracie

Written by Jason Bright for BJJEE

Rener Gracie has been quoted as saying,“learn jiu jitsu so that when a giant walks by, you don’t think to yourself ‘oh no,’ you think to yourself ‘how interesting!’”. This is the thesis for jiu jitsu. Search the internet and you will find quote after quote from many a jiujiteiro describing how Brazilian jiu jitsu can not only even the od
ds against a bigger opponent but oftentimes even tip them in the favor of the smaller man. But how? How can something that has been coined as the Gentle Art, consistently allow the seemingly lesser person to come out on top? As a smaller player myself, who trains at a school where pressure is king (Genesis Jiu Jitsu) and monsters walk the mats on a daily basis; this quote is on constant recall. It reminds me that yes, indeed, giant
s are walking among us however; technique still rules the land. And yes, technique is the key to survival. Without having confidence in the techniques that have been drilled over time, no matter the size of the opponent, whether he is 70 pounds heavier than yourself or 70 pounds lighter, the match is lost.

Obviously, there are other factors that play a role whenever faced with a larger opponent: the urgency to stay on top being primary. But, even if one were to be taken down or thrown and end up in the bottom position to inevitably fight off the Golden Grail of big guy attacks: the Americana, techniques have been developed and have been battle proven to be successful in escaping. Now, knowing those techniques would have required sufficient mat time but, that discussion can be saved for later.

As much as many people would love to have a “Survival Guide for Rolling with Heavyweights” there isn’t one and anyone who offers you that prescription is taking full advantage of your naivety. Brazilian jiu jitsu was designed with us little guys in mind. It is centered not on strength but timing, strategy and technique. Speed beats size, timing beats strength and technique beats all.

Square up with the biggest guy in the gym on a consistent basis and a few things are guaranteed to develop.

-First, bruises. You will be beat up. Sorry, BJJ is brutal and even the best technicians get roughed up on a daily basis. Don’t fret though. In time the pain with subside and your mental fortitude will become the strongest weapon that you have. Through the bruises you will find the seconds and milliseconds that will be the difference between an escape or a submission.

-Second, submissions. I mean, you will be getting tapped. There will be a very large learning curve, at first. Over time, this curve will begin to straighten out though and as the bend starts to disappear more opportunities will come into focus. The “rest stops” that your opponent decides to take on your chest after a scramble will transform from a moment of discomfort into a moment of opportunity as you decide what to do next.

-After all the bruises and submissions that are received though, one thing will ring true, that is if you are able to train correctly, again a whole other point of discussion, muscle memories will have been developed that will allow you to react instead of think thus, saving precious seconds. Seconds that will allow a smaller, faster, more technical opponent to realize that a giant is not an obstacle to be ignored but instead an obstacle to be explored. A tree to be climbed, that at first attempt, the footing is unsure and a few branches are relied on far too much, breaking on you mid step leaving you injured and cautious. As more attempts are made the steps become more sure and the the weak branches are all gone, tossed aside. The branches that remain, whether weak or strong, are easily noticed. Utilized if strong and passed over if weak. This is how technique is perfected and this is how you roll with giants.

Learn The Secrets That Have Allowed This 127-LB Champion To Destroy & Dominate 200+ LB Monsters At-Will
See How One Of The Greatest Black Belts Of All Time Sweeps And Submits Everyone, Even Guys Double His Size.