How To Use The Scissor Sweep In BJJ Effectively 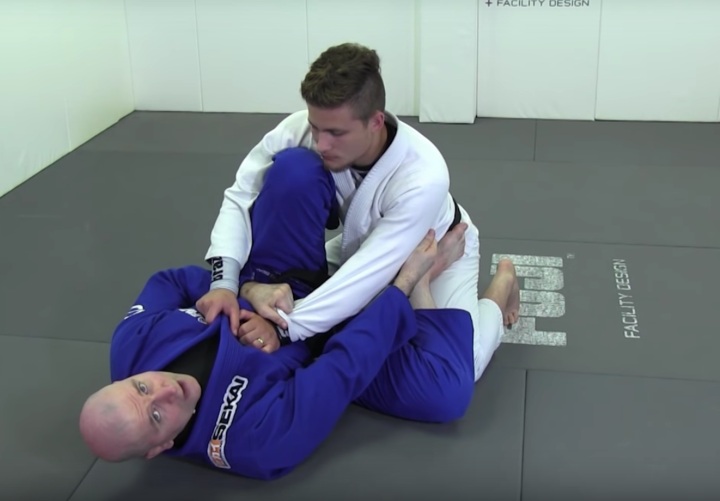 Perhaps one of the first techniques you’ll learn in Brazilian Jiu-Jitsu is the scissor sweep from the closed guard. The scissor sweep is a technique characterized by the scissoring motion of your legs to unbalance and sweep an opponent. It is an excellent technique to demonstrate how BJJ uses leverage to move large opponents.

Today we’ll discuss the mechanics, variations, as well as misconceptions of the scissor sweep.

One Of The Best Sweeps To Learn For Beginners

The scissor sweep is a great option for newbies because it starts by first establishing good control of your opponent’s posture. A typical scissor sweep starts from the closed guard, a guard known for relying on cross collar and sleeve control.

The inherent reliance on grips from this guard makes it easier for beginners to transition to an attack because you still have some form of control over your opponent.

To execute a scissor sweep, you need to first open your guard, shift towards a hip, place a knee on your opponent’s torso and block the other knee with your foot, all while maintaining control of your grips.

Next, you need to unbalance your opponent (kuzushi) by pulling the torso towards your head, thus making the body lighter. From here, you use your knee to dump the opponent towards one side while making a scissor motion with your legs. You should be able to go to mount easily if done correctly.

While it may be a great technique, many think it is only a move best used by and on white belts as it doesn’t work on people with higher ranks. This is incorrect. Most “beginner” techniques don’t work as effectively on experienced grapplers because they know the counters to them.

For this reason, it is critical to set traps and work on combinations to mask the technique. Doing a scissor sweep (or any technique for that matter) without any setup on, let’s say, a purple belt simply won’t work. Alternatively, you can also slightly modify the technique depending on the entry and initial grip.

In this video, BJJ World Champion Teco Shinzato from the Evolve Fight Team demonstrates how to execute the scissor sweep. Note that the key detail of this sweep is to load the opponent’s weight to your knee. An effective way to do this is to turn your wrist as you pull the arm (similar to how you’d look at your watch).

This tip makes it easier for you to create kuzushi and thus makes the sweep more high percentage. Once you complete the sweep, you can block the shoulder by using your arm that’s gripping the collar, slide to mount, and you’re all good.

If you are a beginner to Brazilian Jiu-Jitsu, it is important to remember all the steps involved in the technique, from the initial grips up to the actual execution of the sweep.

As you become more experienced, you can slightly modify these for as long as they are still mechanically the same. This is how you create variations of the same technique.

This is an excellent example of executing a technique with slight modifications with the entry and grips. In this video, John Danaher shows a variation of the scissor sweep from a 2 on 1 grip. This is especially useful when your opponent grabs your lapel in an attempt to open the closed guard.

First, you establish a cross sleeve grip on the hand holding your gi and grab near the tricep on the same side. This enables you to control one side of your opponent’s body.

Next is to place your knee at an angle towards their chest and use your foot to block near the hip on the opposite side. You can bring your knee forward to unbalance your opponent, making it easier to complete the sweep.

In this video, BJJ black belt Jason Scully demonstrates the overhook scissor sweep in detail. This is another strong variation of the scissor sweep, and it starts by establishing the overhook grip on one arm. You can move your hips towards one side as you get the overhook, but it is typically better for you to be a little square with your opponent’s body.

From here, grab a cross lapel grip and lift your elbow while placing your knee at an angle on the torso. Your opponent should be almost tilting to a side at this point. Finish the sweep using the same scissoring motion as discussed above.

In this video, Jordan Hix shows a couple of simple scissor sweeps without the gi. The first three techniques are from the sitting guard while the last is from the closed guard. Let’s first discuss the open guard sweeps.

Technique 1 is where you establish a 2 on 1 grip while keeping your elbow close to your body.

This makes your structure secure while making your opponent’s posture vulnerable to sweeps.  You then place your knee towards the sternum while blocking the knee with your other foot. Elevate to create kuzushi and complete the sweep.

Technique 2 is similar to Technique 1, but you now use an armdrag grip instead of a 2 on 1.

Remember to pull up on the elbow and push down on the wrist, making the arm structurally weaker. From here, proceed to the usual steps of placing the knee on the sternum while blocking the knee as you go for the sweep.

Technique 3 is basically a no-gi version of the basic scissor sweep, but you grab the back of the head and wrist for control instead.

The last one is a cool sweep from the closed guard. It is similar to Jason Scully’s version, but the grip is fundamentally different.

You start by dragging your opponent’s arm to the middle of your chest. You then loop your left arm to your opponent’s until the crook of your elbow is touching theirs. Next, slide your right arm and grab the elbow, similar to a rear naked choke grip. Once the grip is secured, you can finish the sweep by doing the exact steps discussed in the other variations.