How To Perform A Crossface In BJJ 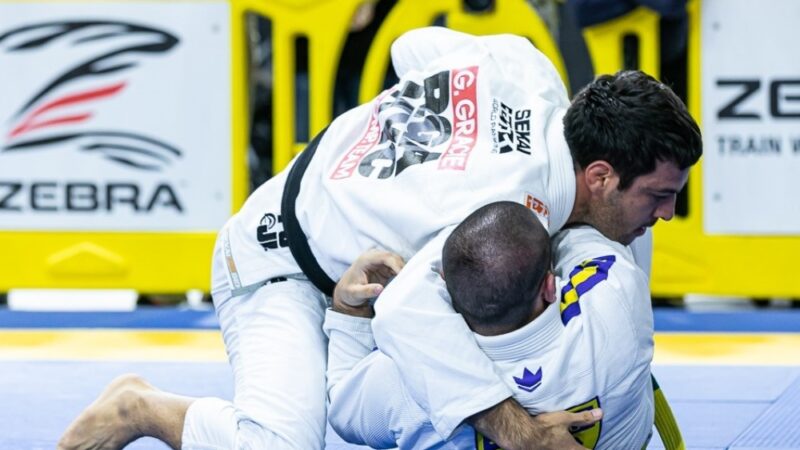 Wrestling moves like the crossface are typically applied from the referee’s position (similar to the turtle position in BJJ) and is used to flatten the opponent to limit movement and score the pin. While it has various uses in BJJ, applying it from the half guard is the best way to pass the guard, according to John Danaher. In this article, we will talk about how to perform the crossface in BJJ.

What Is The Crossface?

The crossface is when a grappler on top applies shoulder pressure to the face, particularly around the jaw area, intending to move the head in a compromising position. Doing so limits the movement of the opponent’s head and, at the same time, their spine and body. As Danaher said, control the head and you control the body.

Unlike how it is initially applied in wrestling (usually from behind), the crossface in BJJ is applied when you are already on top of the opponent wanting to pin them supinated on the mat. There’s a difference in attacking philosophy between BJJ and wrestling when you are behind your opponent.

Applying the crossface is an excellent option in wrestling as it is a step towards pinning the opponent on the mat. On the other hand, taking the back is perhaps the best approach in BJJ because you get points and are in a prime spot to attack for chokes.

The crossface is usually applied from pins like top side control, mainly to apply pressure while pinning the opponent on the mat as you look to transition or apply a submission. It can also be done from the full mount to ensure that you prevent opponents from moving to their sides.

Likewise, the crossface is a great tool in the top half guard because you can weaken their underhook attempts by smashing them flat on the mat. This is one of the most critical details to efficiently pass the half guard.

Crossface In Side Control

To maintain a dominant side control, most grapplers are taught to keep chest-to-chest connection while blocking the hips of the opponent to prevent their movements. Additionally, it is essential to apply a crossface to limit the movement of your opponent’s head. In this video, Tom Davey from The Grappling Academy explains the details of the crossface.

Grapplers usually place their near hand under the head of the opponent and drop their weight, applying pressure using their shoulder to the jaw. Doing this will force the opponent to face the opposite direction and will likely do a reversal by turning their back on you and roll.

Tom suggests putting your hand under the opponent’s head and grabbing all the way underneath their armpit as your bicep pressures their jaw while the other hand (far hand) is placed on the mat. Pull your near hand by applying the crossface towards your groin. This puts pressure on your opponent’s spine.

This technique makes you hard to buck over and is a safe way to keep the pin. While dropping your weight on your opponent’s head is a nice move, you are susceptible to getting rolled over.

Crossface To Pass The Half Guard

Half guard passes are great because it gives you direct access to the opponent’s head. This is why, according to Danaher, the best way to pass the opponent’s guard is to force them to half guard. Once in half guard, it is very easy to access the head using a strong crossface.

This approach will force the opponent to open their half guard as you climb up, allowing you to use your head as a post near their far shoulder as you drop your hip down towards your elbow. This pressures the opponent’s spine, which dramatically limits their mobility.

Remember that the further your hips are from your elbow, the weaker your crossface will be. The true power of the crossface comes from the hips.

There are a lot of things you can do in full mount. You can apply submissions, transition to other pins, or even go to the high mount. The crossface can be utilized to maintain strong mount control.

Once you get the high mount, you can apply a crossface as you grind the opponent’s face to a side using your chest. Use your other hand to post on the mat as you stay low. Pull with your hand doing the crossface while grabbing the opponent’s shoulder for extra control as you push with your chest. This will force the neck to turn and make it very hard to move.

Bridging won’t work as you have your hand posting on the mat and your head facing the direction. Bridging to the opposite side wouldn’t work either because the opponent is facing the direction of your posting hand. Completing all these steps will definitely level up your mount control.

The crossface, when applied correctly, is a powerful way to put pressure on the opponent. It is one of the most fundamental techniques in BJJ that will make you tougher to deal with once you get your favorite positions.

It is applicable in gi, no-gi, and even mixed martial arts. It is also a technique that will serve you well until the black belt level. Remember that the crossface is not a striking technique so always be mindful of how you use it in the training room.