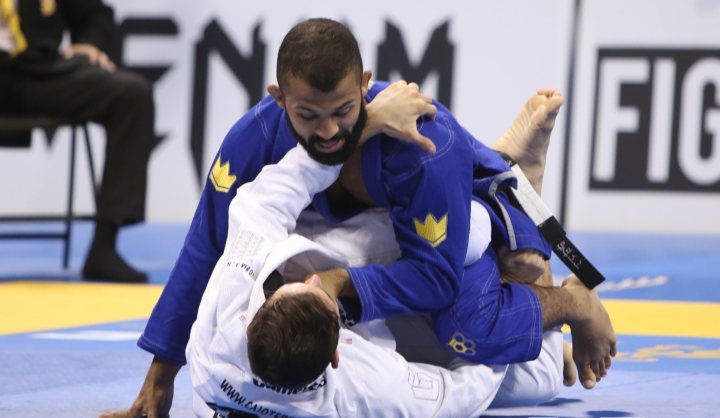 The art of guard passing is a complex world filled with many styles and variations. In the sport of Brazilian Jiu-Jitsu, passing the guard is a necessary step in the positional hierarchy. A successful guard pass means that you have nullified the opponent’s defenses. This is usually done by going over, under, or around the opponent’s legs.

There are many styles of guard passing. The great thing about this aspect of grappling is that you can pick and choose the type you want. In this article, we’ll talk about the leg drag guard pass, a modern approach to guard passing that burst onto the scene in the 2010s.

What Is The Leg Drag?

The leg drag is a passing position where you control the opponent’s hip by dragging the leg towards one side. Early variants of the leg drag have been seen in competitions since the early 90s. It was used as an alternative option to failed toreando and stack pass attempts. It was also seen in the 2000s, used explicitly by BJJ greats like Fernando “Tererê” Augusto and Vitor “Shaolin” Ribeiro.

The modern leg drag is mainly attributed to the technical contributions of Gui and Rafa Mendes. The Mendes brothers are multiple-time BJJ world champions and are known for their highly nuanced and technical games.

Many top athletes have used the leg drag to great effect. Champions like the aforementioned Mendes brothers, as well as Caio Terra, Mikey Musumeci, Lucas Lepri, and the Miyao brothers, have successfully employed the leg drag style of passing in multiple championship-level matches throughout their careers.

You might have noted that these competitors are mainly from the lower-weight classes. The leg drag is not a crushing style of passing; it requires specific footwork and the use of proper angles to work. While this may be the case, BJJ practitioners of all shapes and sizes can use the leg drag provided that they understand the mechanics of the technique.

Using The Leg Drag In Gi And No-Gi

The leg drag can be used in both gi and no-gi situations. It can be trickier to pull it off in no-gi, though, primarily due to the lack of grips around the leg. This technique is very useful if you play a more open and dynamic passing game. In order to play the leg drag, you must play from a standing stance when passing the guard. If you play more of a low, pressure-based game, similar to Bernardo Faria’s, the leg drag pass may not be a good addition to your passing style.

How To Perform The Leg Drag Guard Pass

The technique starts from the standing position, as previously mentioned. The central concept of the leg drag is misdirection. You can do this by moving the opponent’s legs to the side as you move your body to block the hip and legs from recovering guard.

There are simple and complex ways to do the leg drag. The simplest way is to basically throw the legs to one side as you move the opposite way to clear the legs. The more technical approach is to control the legs using your grips throughout all ranges.

Start by controlling the feet and then proceed to block the knee and hip as you come closer. Remember to use your knee to pin the opponent’s leg once you see the opportunity to do so. The finishing mechanics of the leg drag is to go around the opposite side of the dragged legs, then secure side control. This is a fantastic combination in competition as you’ll quickly rack up points for both the guard pass and the pin.

Is The Leg Drag Recommended For Beginners?

The leg drag is one of the more technical guard passes you’ll see in BJJ. While it may seem easy enough to perform, the grips to isolate the legs are specific and can lead to confusion when you’re first trying out the technique. It is recommended that you learn the toreando pass first, as it is similar to the leg drag in some ways but is much simpler to execute. Once you understand the details of moving around the guard as you control the opponent’s legs, then you can explore the leg drag.

One of the keys to success in these types of guard passes is the ability to do multiple things simultaneously. The leg drag is a technique that needs angular movement on your part, as you control and redirect the legs to a side. You can isolate this movement into a drill so that you’ll get a better appreciation of the technique.

Start by getting the initial grips and slowly transition to dragging the leg as you go to the opposite side. Be mindful of the grips and apply pressure to the hips as you go down. Do this many times as you’d like, preferably on both sides. Your training partner can slowly add resistance as you become more experienced in the technique.

Note that you don’t have to be super fast to do a leg drag, all you need is proper technique and good timing, and you should be able to apply this in live sparring. If you are interested in adding the leg drag to your game, it is recommended that you first watch highlights of the Mendes brothers in action. You’ll be amazed at how they use the leg drag from many different positions.

The leg drag guard pass is an effective passing technique used in gi and no-gi. It is a relatively safe technique and is not reliant on any unique attribute. We suggest that you explore the technique to see if it can be a good addition to your passing style. Let us know how it goes!