How To Get To Closed Guard From Standing with Claudio Calasans 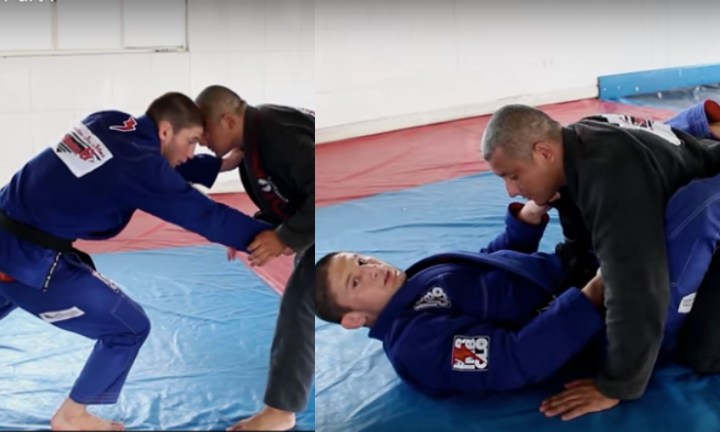 Claudio Calasans is considered to be one of the best middleweight jiu jitsu competitors on the scene today.  This judo and jiu jitsu black belt, has reached the top of the podium at the IBJJF Worlds, Pans and was the 2015 ADCC Absolute Champ.  Though the Atos black belt brings a wealth of judo and wrestling takedown experience to the competition mats, he also occasionally likes to pull guard.

In the three part video series below, Calasans shows his favorite ways to approach the guard pull.  In the first video, he does a simple guard pull that goes exactly as planned.  In the next two videos, he addresses alternatives in the event that he doesn’t break the opponent’s posture (video 2) and the opponent tries to pin his knee, prevent the closing of the guard.

In this first technique, Calasans utilizes a straight collar grip to break the posture and a straight grip on the belt to bring the opponent towards him.  Calasans will then sit to the floor.  He then places his foot in the hip on the same side as the collar grip.  When he breaks the opponent’s posture, he will adjust his hips to bring his legs around them to close the guard.

In video number two, Calasans addresses an option in the event that the opponent is able to fight the posture break and maintain strong, straight upright positioning.  In this case, he will use his belt side grip leg to hook and kick out the leg of the opponent.  This forces an adjustment and the posture is broken, putting them in the position he needs to close his guard.

In the final video, Calasans addresses the opponent that attempts to pin the knee and make a pass attempt, while keeping him from closing the guard.  In this case, he will do a similar hook and kick out the kneeling leg while he throws himself to the side to debase the opponent.