How To Get Back To Training After A Traumatic Injury? 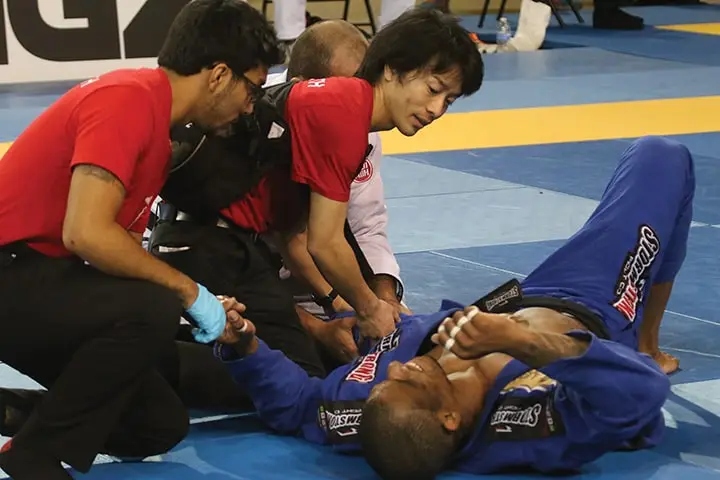 No matter how much you love training Brazilian Jiu-Jitsu, chances are that you’ll get injured at one point in time. And there’s a considerable probability that one of these injuries will not be an “easy” one… It might even be a traumatic injury, coming from a freak accident.

When this happens, you’re probably going to be scared to train again. Or to do the technique that got you injured in the first place. And you’ll need to overcome this fear.
Back in the day, Nick “Chewy” Albin broke his nose in three places by going for the Fireman’s Carry takedown. Afterwards, he was scared of going for takedowns again:

It’s weird how trauma works, right? Because you do something forever and then, all the sudden – one time, something happens, and instantly you begin to associate that thing with the trauma you’ve experienced. And that is, kind of, what you have to get in grips with. At least for me.
I was nervous about coming back to shooting (takedowns) after I had my nose broken in three places. I didn’t want to have surgery again.

However, he knew that he had to overcome this traumatic injury experience. Here’s how he did it:

But, I had to think about it… One: at this point, I have been training for like 15 years or so – and I’d never seen anyone’s nose get broken like that. I had been shooting takedowns forever and never had my nose broken… So, I had to get to get to grips with the kind of a reality of the situation.

That this was just a freak accident; sometimes things happen, right?
And then, after that, I’ve introduced myself with first drilling and then rolling with competitive training partners, and then with anyone I wanted to – to sort of ease myself back into it.