How To Develop Explosive Power for Grappling Using Plyometrics 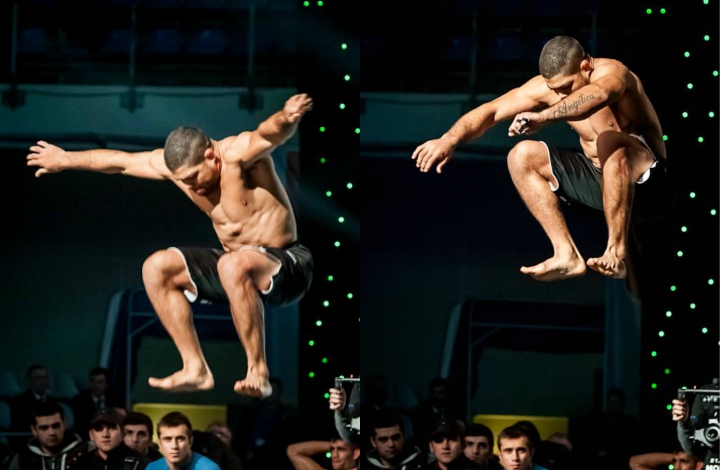 Written by Funk Roberts of FunkMMA.com

Combat Athletes are bigger, faster and more explosive than ever before.

With this list of various explosive movements it is important all grapplers, MMA, Martial Arts and Combat Athletes incorporate plyometrics into their training routines.

Plyometrics training builds the explosive strength using natural dynamic movements such as jumping. Most fighters need intense energy bursts either throughout the entire fight or intermittently depending on the combat sport.

So needless to say the combat athletes who train with plyometrics usually perform better and are more explosive than their counterparts.

When you look at top MMA athletes that have explosive strength you think of UFC fighters like Georges St Pierre, Jon Jones, Anthony Pettis, Anderson Silva, Jose Aldo or even Muay Thai fighter Baukaw. It doesn’t just stop there, but I am sure you can pinpoint the most explosive fighters in your combat sport.

In todays post I will discuss what plyometrics are, why they are important to you and list my 10 Top Plyometrics Exercises for Fighters

What Are Plyometrics and a Little History

Plyometrics are basically a quick, powerful movement involving pre-stretching the muscle & activating the stretch- shortening cycle to produce stronger concentric contraction
It would be during one bitterly cold, snowy Russian winter that Yuri Verkhoshansky, a young coach at the Moscow Aeronautical Institute, would put together a training program for his jumpers to use during the winter months.

He developed a means of enhancing speed strength and called it the Shock Method. This method of training would be crucial to the success of many Russian jumpers and sprinters of the time, and would lead the western world, and in particular the U.S, to attempt to discover the methods of training being used, and in the end develop what we know as plyometrics today.

It was Fred Wilt, a US track coach in the 70’s, that is known to be the first to use the term plyometrics to describe the jump training that some U.S coaches were implementing with their athletes. After the Americans saw a Soviet athlete step off a box, jump in the air, the rest as they say is history.
As MMA and other combat sports start to involved more and more athletes are implementing explosive plyometrics into training.

I don’t want to get too scientific here. You can find a ton of information on the science of plyometrics on the web. My goal is to give you the basics of what plyometrics

Plyometrics is the science examining the explosive movement generated by muscle power, with particular application to sport training and performance. As power is the product of speed plus strength, the ability of an athlete to generate force in a short period of time is at the root of developing greater explosive effect.

Plyometrics training is designed to develop rapid alterations of eccentric and concentric contractions, while constant resistance is applied to the target muscle or muscle group.

When you improve your vertical jump, you are also improving your explosiveness, speed and agility. This means you’ll be able to jump higher, get off the floor more quickly, kick and punch with power and speed, move in and out fast and explode for takedowns, throwing flying knees and defend much more efficiently.

For most combat sports like MMA, muay thai, wrestling, taekwondo, grappling and others it is advantage to develop high percentage of fast twitch muscles fibres in your body.

Before performing plyometrics for martial arts you should be thoroughly warmed up. Not only will it help to prevent injury but it can also increase the effectiveness of the drills. It does this by increasing the sensitivity of the muscle spindle, which contains the fibres (called intrafusal fibres) that register the amount of stretch within a muscle.

Here are some more important guidelines when performing plyometrics for martial arts:

Strength Guidelines for Plyometrics – requires that you have a solid strength base as a prerequisite. UFC and S&C Coach Eric Wong lays out some amazing guidelines below for strength requirements before starting plyometric training.

Without these minimum levels of strength in the Back Squat (or comparable exercise), the knees will get hammered and you risk a meniscus injury or problems with your patella, since the muscles won’t be able to absorb the force and it will all go into the other joint structures. And there’s nothing worse for explosive power development than injuring a ligament or meniscus.

For upper body plyometrics, a 1RM Bench Press of 1.0 x Bodyweight would be the minimum I’d recommend, for the same reasons as the Back Squat, except here it will be the shoulder and elbows taking the beating.

1. Perform lower body plyometric exercises on a soft surface such as grass or exercise mat.
2. Two to sessions of plyometrics per week with at least 48 hours rest between sessions
3. Taking a 2 to 5min rest in between sets is essential. The goal is not fatigue but to complete each repetition with the maximum amount of speed and intensity.
4. A plyometric session should not contain more than 120 ground contacts for any muscle group.
5. Do not add extra load such as ankle weights as this can lead to injury and negatively effects the quality of the drills.
6. Make sure to keep the torso erect during the movements — it prevents undue strain on the lower back.

Plyometric training should be progressive in volume with low reps and sets, but with maximum effort. These movements together do NOT make up a workout but are my 10 exercises that all fighters should implement into their overall strength and conditioning training throughout the year.

Please refer to the strength guidelines above before trying these exercises, start with basic movements, low boxes, good technique and low reps.

1. Barbell Jump Squats – This is an advanced movement and should be performed after you can do bodyweight jump squats efficiently and you have lower body strength.

Great exercise to develop explosive takedown strength and also speed and stamina for strikers and kickers.

2. Plyo Push Ups – Probably the nest upper body explosive exercises and when you can get the entire off the ground then it becomes a full body exercises. Pushing, punching, grappling and overwhelming your opponent are all benefits you will get form this exercise

3. Skipping/Jump Rope – the simplest yet least used plyometrics exercises by most athletes (not talking to you muay thai fighters and boxers out there, you get it)

I can’t understand why fighters don’t warm up with and incorporate skipping into training. This is a great fast twitch muscle builder, especially for strikers.

4. Tuck Jumps – this is explosive movement also helps to develop dynamic power in the legs and overall agility. The tuck jump exercise ranks near the top of the list for developing explosive power using only an athlete’s body weight

6. Explosive Step Ups – This unilateral explosive movement works each leg separately. Many movements in martial arts start and end with one leg, so training unilaterally (one limb at a time) is crucial.

7. Lateral Jumps – One Legged Hops – Lateral plyometric jumps are advanced exercises that can be used to develop power, agility and balance. Because most martial arts and combat sports incorporate side-to-side movements, it would be optimal to practicing these moves during training.
Lateral movements, both bilateral and unilateral not only improve strength, stability and coordination, they also help reduce the risk of injuries by enhancing balance and proprioception through the whole body.

8. Med Ball Throws
Using a weighed medicine ball adds intensity and builds punching strength.
Med Ball Throw and Sprawls develop upper body explosiveness along with adding an explosive sprawl to the ground. Med Ball Chest Passes are great for developing fast twitch muscles in the upper body, which you will benefit from if you want to throw more powerful punches.

Speaking of powerful punches, the hip rotation is where most of your punching and kicking power is generated so side rotation med ball wall throws are great to help develop explosiveness.

9. Bounding – Long Jumps
This is a great way to develop lower body explosive strength and power. You will need overall lower body strength to perform these effectively and so you do not injure yourself with aggravated knees and sore shins.

10. Depth Jumps
In my opinion there isn’t an exercise more effective for increasing lower body explosive power than properly executed depth jumps. This movement puts a huge stimulus on the CNS and can lead to huge improvements in explosiveness. The key is performing them correctly.
When you contact the ground from the drop, your time to explode back into their air should be minimized with your heels not hitting the ground.