How To Combat A Tall Fighter In BJJ 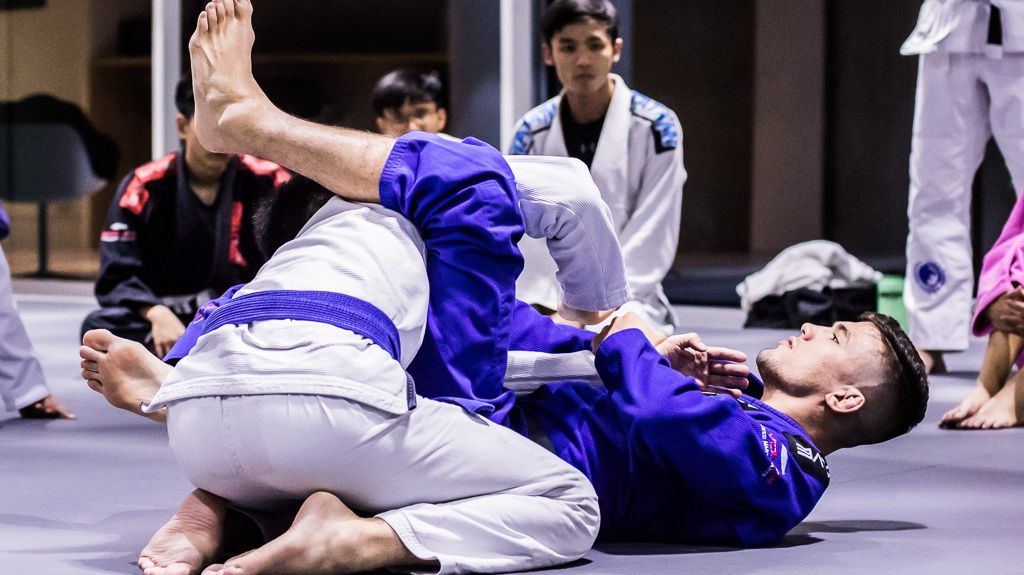 Whether you are small or tall, you are going to want to know the ways to combat a tall/lanky fighter when competing in Brazilian Jiu-Jitsu (BJJ).

As with most sports, some natural advantages and disadvantages come with your size and frame. In Brazilian Jiu-Jitsu, a lanky fighter will have lengthier, and potentially more dangerous, tools at their disposal. Their arms and legs will be able to trap you from extreme distances. A lanky opponent will also be able to sink in deep D’Arce chokes or control your back easier than others. He might even have a nasty triangle choke that he attempts more often than other competitors.

However, there are equally as many disadvantages as there are advantages to having a sizable reach advantage over an opponent. Firstly, it is sometimes more difficult to squeeze your limbs into difficult areas. Lanky fighters are also more prone to being smashed by tight and heavy smashing pressure. Let’s not forget a natural disadvantage of a lanky fighter having a larger neck to attack, as well.

Let’s review the techniques and strategies that you should be mastering if you want to overwhelm lanky fighters in BJJ.

Today, Evolve Daily brings you “How To Combat A Lanky Fighter In BJJ.”

Pass the long and annoying legs

If you remember John Danaher’s unforgettable appearance on the Joe Rogan Experience MMA Show, you will already understand the importance of getting past the dangerous legs of your opponent.

Danaher, who is a disruptor in the world of BJJ and the creator of one of the most dominant leg lock systems at the highest level of the sport, explained that the legs are a significant obstacle because they can be used to recover guard and assist with leverage.

This time, we will take it a step further and discuss the requirement of passing the long and annoying legs of a lanky fighter.

See, legs are already dangerous. When they are longer and can reach you from unusual distances, they become even more threatening.

If you are stuck in the full guard of a lanky fighter, you should be immediately be attempting your fundamental guard passes.

In the video above, Brazilian Jiu-Jitsu Champion Gamal Hassan demonstrates five essential ways to pass full guard. We particularly like the second guard pass when you are facing a lanky fighter, as the double-under technique works exceptionally well against those with long legs.

There are many ways to execute the double-under pass, but Hassan shows a technique that involves standing and breaking the full guard before diving your hands and arms in between their legs and gaining the double-under position. Then, with one arm, reach across to his opposite shoulder, apply downward pressure, and pass the legs.

Once you have passed the legs, you want to work your way up your opponent’s body in a different manner than you might be used to.

Against a similarly sized opponent, you might scoot to side control and look to establish the position or form an alternative, such as judo side control.

When doing this, however, you want to stay tight and heavy. It might be a good idea to transition straight to knee-on-belly and apply some heavy pressure there. When passing, don’t be afraid to use your head to generate pressure against his chin and remove the strength of his posture.

Remember to keep your hips low and focus on maintaining a solid base. Don’t rush; there’s no need to hurry through the positions. Instead, it might be a good idea to take your time and stay centered.

Are longer arms an advantage in Brazilian Jiu-Jitsu? Certainly not.

Longer arms also mean that there is more body to attack. If a lanky fighter leaves one of his long arms in a bad position, you can snatch it up immediately and begin working for an armbar or another attack.

2x BJJ World Champion Teco Shinzato demonstrates a basic armbar setup in the video above. Simply grab his sleeve with your same-side arm. Then, with your other hand, reach across and place his elbow towards the center of your chest. Shinzato then explains to let go of the sleeve and reach up and break his posture by pulling down on their opposite shoulder. Then, you want to pivot and end up with your nose, his arm, and his ear, all in one line. Press down and then pass your other leg around and over your opponent’s head. Now, to finish the technique, you can point your arm up and bend your legs and press down.

Teco Shinzato exceptionally describes the process of a basic armbar in the video above, and it is a must-watch for any practitioner.

While there’s no advantage of having a longer neck than average, there’s certainly an opportunity that comes with it for an opponent of a lanky fighter.

His neck isn’t going to be giraffe-like, so don’t go thinking you are going to have tremendous success choking a taller opponent all of the time. But, it’s certainly noticeable.

If you have taken the back of your opponent, work for that rear-naked choke and attack the neck. Stay tight, apply a body-triangle, and look for an opening.

If you are on the bottom and the lanky fighter is passing your guard or looking for a submission of his own, always keep an eye out for an opportunity to choke. Likewise, look for the opportunities while you are on top. A lanky fighter might expose his neck while looking to use his long arms or legs and recover guard. A lot of this will depend on the tendencies of each, but lanky fighters usually leave their neck out.

In the video above, Brazilian Jiu-Jitsu World Champion Leandro “Brodinho” Issa explains the concepts of a basic guillotine choke. This is one particular choke that you may have success with against a lanky fighter in BJJ.

When you are ready to up your choking game, look no further than this brilliant anaconda choke demonstration by Angela Lee.