How To Apply A Triangle Using the Lapel? Andre Galvao Demonstrates 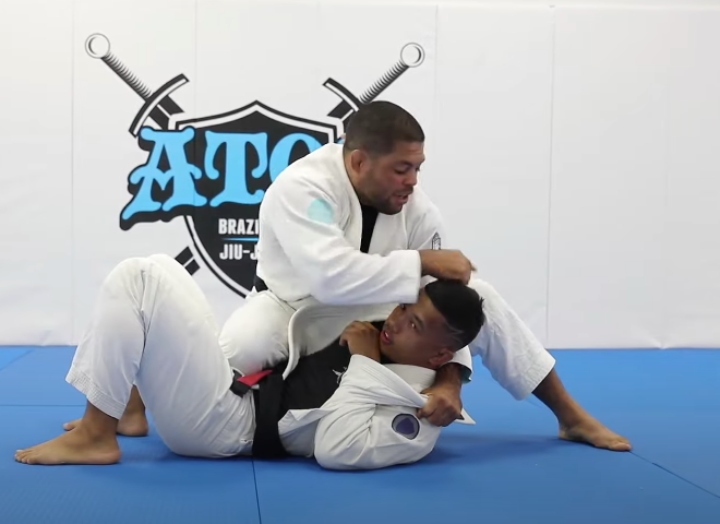 When thinking of the Triangle Choke, your first association is probably hitting it from Closed Guard or, perhaps, from the Mount. However, it’s probably rarely the case that you’ve had an opportunity to practice scoring a Triangle from Side Control; or at least more than that one time in training when your coach decided to show you a not-so-high-percentage setup.
However, the setup doesn’t have to necessarily be lower percentage than the one from Mount, for example. The thing is that you need to learn how to control your opponent first, making them so stuck that you’ll have a relatively easy time tapping them out.

Andre Galvao shows how to do exactly that, so as to make your Side Control a position which you’ll be hitting Triangles rather frequently from. Let’s get to it!

As we mentioned above; if you gain total control over your opponent – that is, if you incapacitate them from their ability to move effectively – then you can almost certainly submit them! Same thing with the Triangle from Side Control; your first objective is to „tie them up“.
And just how would you begin to do that? Yes, you’ve guessed it right: by taking advantage of their lapel! Andre demonstrates that, as you’re in Side Control, you’re supposed to take their far-sided lapel with your far arm; and then feed it, underneath their elbow and armpit, to your other arm. Make sure that you create a strong tension through that lapel, and that you push your shoulder into their face during the process; this will make them more than uncomfortable – and will grant you great control!

Having done that, your next objective is to isolate their second arm. The way you’ll do this is quite simple, actually. Andre shows that you’ll use your knee to push and scoop the opponent’s elbow out of the way, higher towards their face. Once you do this, you’re going to climb your knee up towards your elbow; in such a fashion that their arm is now trapped in the space between your elbow and knee.
If the opponent is really tough and their elbow is tight to their ribcage, don’t fret. You just need to hip switch and use your other knee to create space by pushing their elbow up; after creating that space, switch your hips back and do the same thing as before with your „primary“ knee.

THE KNEE ON BELLY BLUFF AND ITS FRIEND – THE TRIANGLE

Now it’s time to bring up the Triangle’s unlikely friend: the Knee On Belly. Yes, it is! Once you’ve established control, Andre showcases that you need to Knee On Belly the opponent – just pay attention that the space between your elbow and knee doesn’t open. What they’ll do is push your knee off with their free hand; you’ll grab it and trap in place.
You’re now in position to commence the Triangle.

To do that, Andre demonstrates that you’ll slide your leg underneath the opponent, by shifting your foot to their lower back – and simultaneously pulling them towards you. Most people will start turning into you automatically once you do this; and you’ll take advantage of that by shooting your leg over their shoulder for the Triangle setup!
To finish the Triangle from here, Andre shows that you need to take your leg further over, solidify your position by scooting back on your shoulders if necessary; making sure that you block their other arm from grabbing your lapel and thus stacking you… And then lock a figure four, tapping them right there!

Maximize your potential from side control with this 8 hour fundamental master class from elite competitor and instructor Andre Galvao. 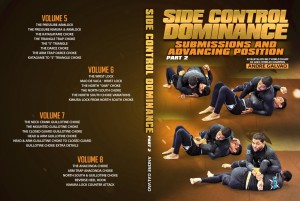