How Grapplers Can Strengthen Their Lower Backs & Never Have Problems Again 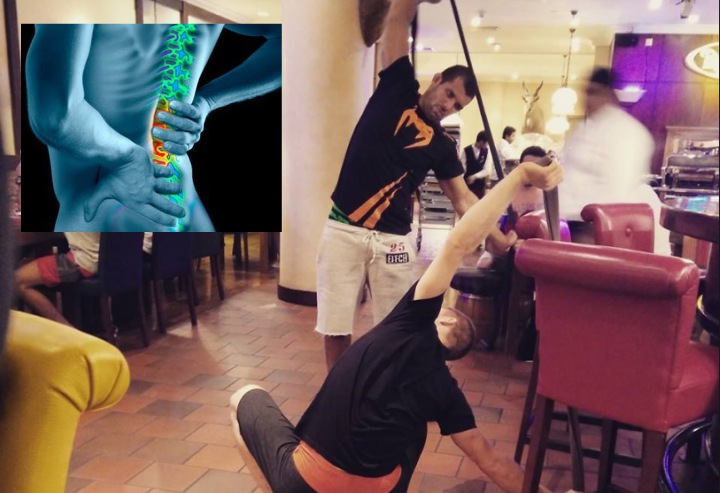 In this article and video I’ll show you a very simple solution to never having lower back problems again.

BJJ and MMA training can be very hard on the lower back. Especially the takedown drills where you lift your partner many times. Also people sprawling on you and many other situations.
Having a strong core and is very important and especially the lower back since this is a problem area for most people.

When I was a competitor I almost never had lower back problems. Why? Well because I either lifted weights or did body weight exercises for the lower back and other muscles also.

But when I became a coach and stopped competing, my training volume dropped significantly and I didn’t do as much core work but still continued sparring and drilling.

After a while I started noticing that that I was injuring my lower back and that it would either be a case of herniated disks or muscle sprain which is better than the first option.

I knew I needed to get back to strengthening my back regularly, so I came up with a very simple and very effective program. And today I will show you two variations of it. It worked for me and it also helped others to whom I showed it.

So what is it? It’s basically ab crunches and back extensions done back to back with no rest in between. It is important to also strengthen our abs together with our back.

That was the simple version where you only use one type of ab crunches and one type of back extensions.

But there is also a more complex version. It’s basically the same as the simple one which means the reps and sets are identical. The only difference is that you do 3 different ab exercises and three different back extensions. That’s it.

I usually do this version and whenever I do it consistently – no back problems whatsoever. That means you should do it every day in the beginning. After a you strengthen your back by doing this for a while, you can do it 3 x week to maintain your strength.

Start with only 3 sets and then you can ad more sets or reps as you progress. The key is to do it every day.

You can also do this at home on a carpet or on a yoga mat or even outside on a yoga mat: http://amzn.to/2hF8JsH