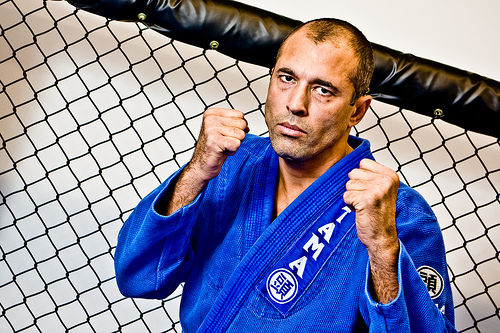 Whenever you hear Royce Gracie’s name, you’ll be able to hear quite a bit about him; about being a legendary figure of both BJJ and MMA, but a controversial one as well. The truth is that, although he most certainly did have his controversial moments, Royce Gracie is a legendary figure for a reason; one that contributed to growth and popularization of both MMA and BJJ to the masses.
But why is this so? Was he really that good as everyone says he was – was he truly such a domineering fighter?

The best way to answer this question is to take a brief look at his MMA career track record.

Royce began his MMA career at the UFC 1 in 1993. In the quarterfinals, Royce fought boxer Art Jimmerson. He quickly took Art Jimmerson down, mounted him, and secured a win with the boxer tapping out because he didn’t know how to get out of the position.
Then, in the semi-finals, he fought Ken Shamrock, who was a wrestler and well-versed in submission fighting. Despite initially good defense by Ken, Royce managed to tap him out with a Sleeve Choke, proceeding to the finals… Where he met with a Karate fighter Gerard Gordeau – beating him with a RNC.

The Royce’s success at UFC 1 popularized Jiu Jitsu, as a lot of people wanted to start training it; but it gave rise to MMA as well – many were highly anticipating the UFC 2. At this 16 men tournament, consisting out of one night and four matches, Royce once again came out victorious.
In his first fight, he fought Minoki Ichihara, beating him with a lapel choke in over 5 minutes; more than all of his fights at UFC 1 combined. Then, he fought Jason DeLucia – submitting him 67 seconds into the first round with an Armbar. In the semifinals, the first-round submission was Royce’s again; submitting Remco Pardoel with the lapel choke as well. And finally, for the title, he beat Patrick Smith by mounting him and then TKO-ing him with punches.

With already a fearful reputation behind himself, Royce went for the title at UFC 3 again. His first opponent was Kimo Leopoldo, whom he submitted with an Armbar. However, before his second fight, Royce was unable to continue due to exhaustion and dehydration.

This didn’t stop him from continuing to compete, of course, as Royce came back one month later to UFC 4. He first matched up against Ron Van Clief – choking him out in less than 4 minutes. Then, he fought Keith Hackney, winning by Armbar.
In the finals, he faced Dan Severn; a way bigger fighter than Royce was, as well as a very skilled ground fighter. And, although he did pose a lot of difficulties to Royce – who wasn’t able to submit him for almost 16 minutes – he still tapped out due to a Triangle Choke.

This win made Royce Gracie the only person who won three UFC tournaments. He was keen on sealing the deal with the title fight in the UFC 5, against Ken Shamrock once again; but was unable to do so, as the match ended in a draw.

As an addition to the draw, the time limit and rule changes before and during the fight made Royce leave the UFC – after which he would come back to MMA five years later.

In 2000, Royce had his comeback match against Nobuhiko Takada in the Pride Grand Prix. He won by unanimous decision, as he was more active than Takada throughout the fight. Two months later, he fought Kazushi Sakuraba in the quarterfinals; Sakuraba was a submission fighter as well. This fight was huge, since Sakuraba beat Royler Gracie – Royce’s brother – some time prior… Which was the first time after a couple of decades that a Gracie lost a fight.
This gave Royce additional drive, so as to put his family’s name back on the throne. However, Sakuraba won with a domineering display of punches and leg kicks, which ended up with a broken femur bone on Royce’s behalf.

In 2002, Royce came back and fought against Olympic Gold Medalist in Judo, Hidehiko Yoshida. Royce lost this time again, due to a choke – albeit on controversial grounds, as it is still disputed if he was actually unconscious (as Yoshida claimed, in order for the referee to stop the match) or not. The Gracies protested the referee‘s decision under stipulation that, if it wasn’t ruled as a no contest, they wouldn’t fight under Pride FC ever again. This led to Pride overruling the fight as a no contest.
A year and a half later, the two fought again. Royce was a more dominant fighter, but judges weren’t allowed. So, the time expired and the match ended in a draw. After that, Royce breached the contract with Pride (as they wouldn’t modify the rules for him anymore) and signed with K1.

In 2004, Royce fought against the biggest opponent he would ever face – Akebono Taro… Finishing him with an Omoplata! The next one was Hideo Tokoro. What ensued was a very competitve fight, with both opponents going for the win, and with Royce ending up as a more active fighter. However, the time expired, and the match ended up with a draw.

Then, 11 years after leaving the UFC, Royce came back to it in order to fight Matt Hughes. Matt’s wrestling was simply too much, as he completely dominated Royce and won by a TKO. After that, he fought in the Dynamite U.S.A. promotion – wouldn’t you know it, against Kazushi Sakuraba! Royce won, but in a rather controversial fashion; especially since it was revealed that he failed his pre and post fight drug tests.
Finally, after a brief retirement, Royce came back for his final match against Ken Shamrock yet again. He won, despite additional controversy (throwing a knee to the groin mid-match, without the referee stopping the action).

After this fight, Royce retired for good. So, what’s to be said about Royce Gracie? You can be the judge of his greatness… But what all of the above-mentioned stats show is that he, despite the controversy and lost matches (everyone loses from time to time, after all), was an incredibly great fighter, well-deserving of the legendary-status.

Watch the video below to hear more on Royce’s MMA career: