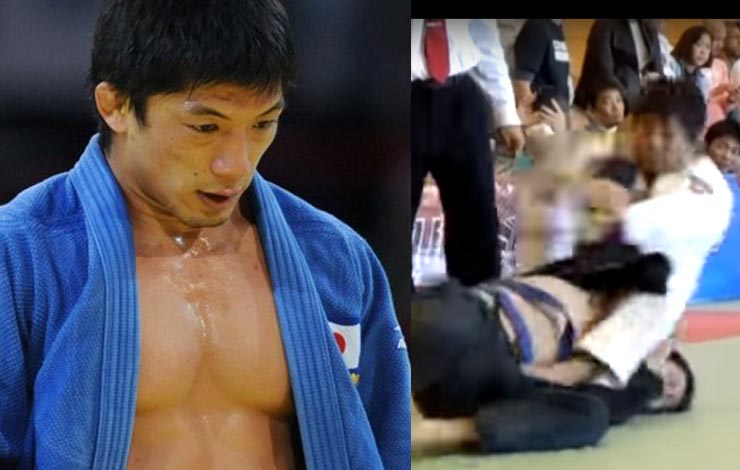 Masato Uchishiba is a Japanese judoka who won the gold medal in the men’s under 66 kg division at the 2004 Summer Olympics in Athens, Greece, and at the 2008 Summer Olympics in Beijing, China. But when we say problematic we certainly don’t mean his Olympic background – Uchishiba was sentenced to 5 years in prison in February 2013 following sexual harassment allegations and suspicion of rape.

He completed his prison term and opted to test his bjj skills at ASJJF Dumau Japan Open Jiu-Jitsu Championship 2017. This championship is under the Sports Jiu Jitsu International Federation.

According to the SJJIF – The SJJIF reserves the right to refuse registration or admission to anyone. Any persons who exhibit unsportsmanlike conduct, are disrespectful, engage in unlawful practices, or do not abide by requests from SJJIF staff will be ejected from the event and are not entitled to a refund. However it seems as though they were unaware of Uchishiba’s troublesome record.

Uchishiba was fired from his coaching post in the wake of the allegations and in January last year, was barred from all judo competitions by the All Japan Judo Federation.

Which brings us to the next point – how an Olympic level judoka managed to utilize a simple plan and quickly work his way through the division.

Utishiba competed in the 82 kg. class, and open class, blue belt. He was representing Alavanca Jiu-Jitsu in Zama-shi.

His plan was simple – get a takedown or at least get to half guard and smash.

The event was first brought to our attention after global training report released a report saying:

Roberto was one of those who ignorantly predicted that Utishiba might have problems with the blue belt BJJ game, based on his presumed paucity of experience with the nuances of BJJ competition, which was in turn based on the assumptions that as a hard-core super successful judo competitor he hadn’t sacrificed precious judo training time to learn something that he wasn’t going to use at that time, and the fact that he had been in prison for the past several years…

… Also, Roberto mistakenly assumed that Utishiba would be as shunned in the BJJ world as he was in the judo world hence would not have a full range of BJJ instructional options. That was a mistaken assumption. Utishiba was obviously welcome at Alavanca, and the tournament participants and fans seemed more hero-worshipful than scornful.