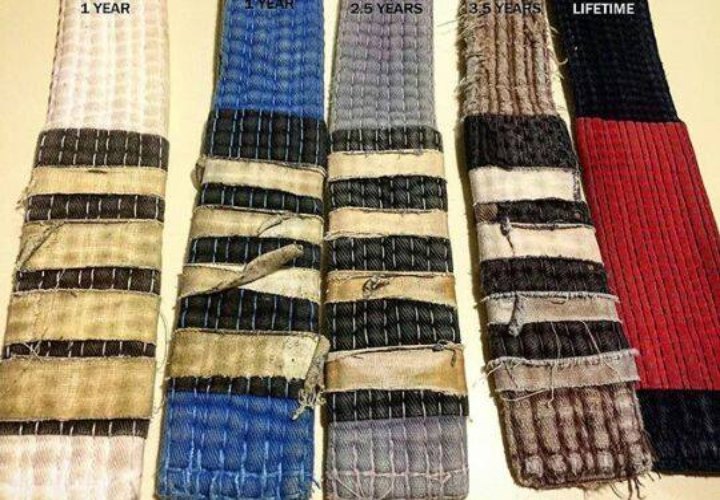 Your overarching goal in Brazilian Jiu Jitsu should always be to become better; to progress as much as you can, while enjoying your path with the experiences and friends you make along the way. So, even though „getting the next belt“ should never be your ultimate goal, belts still show how far you’ve traveled along the journey.
Basically, your game looks different for each belt level you’re at! Here it’s how it (usually) looks like.

When you’re a white belt, your „game“ is that of survival. In the beginning, you’re just trying to make it through the rolls, and to learn the basics behind elementary positions and techniques. Your principal focus is to nail basic movements and to defend better.
However, as the mat hours slowly pile up, you’re getting more confident in your expanding abilities. You’re getting better and better with your escapes and you’re hitting submissions against other white belts more often than they do on you.

Your coach notices that, as well as your dedication and consistency. It’s time for the blue belt!

THE BLUE BELT: „HOW MANY FLASHY TECHNIQUES CAN I DO IN ONE ROLL?“

As you advance into the blue belt, the world of BJJ expands even further. And you want to experience as much of it as possible… As quickly as possible!
You’re experimenting with all of the possibilities in front of you. The limitations of the white belt stage are gone; and you want to take advantage of this freedom as much as you can. You’re playing with positions and your training partners are constantly hearing sentences like: „Hold up, let me try that Flying Octopus Choke I saw on Instagram.“

In a way, you’re trying to find your place under the sun! And sure enough, your game is acquiring a solid form.

THE PURPLE BELT: „THIS WORKS… I HAVE TO WORK ON IT!“

Tying the purple belt around your waist, your game isn’t all over the place as it’s been before; you’re developing it around certain moves that work well for you.
Sure, other parts of your game continue to develop, but now you have more of an idea what you’re good at. So, you pursue that with more vigor and you can see it paying off: with the months and the years, some elements of your game become so good that in those aspects you can go head-to-head with brown and even some black belts.

You’re becoming a seriously good Jiujiteiro. It’s time for the next step.

THE BROWN BELT: „I’LL PERFECT THIS.“

As a brown belt, experience has taught you that – with effort – nothing is impossible. You came here through the combination of discipline and love for BJJ; as well as despite all the injuries and other types of setbacks.
You continue polishing your game. Your go-to moves become very good. Taking pride in seeing the mistake your training partners will make, you take advantage of it way before they see it themselves. You explain things to lower belts with better clarity, as now you don’t just do things… You understand why you’re doing them and why they work.

The BJJ world is slowly, but surely, becoming your oyster.

THE BLACK BELT: „BACK TO SQUARE ONE!“

When you become a black belt, it’s almost as if you’ve gone back to your blue belt days; with Jiu Jitsu becoming a buffet of possibilities yet again. Now, however, your experimentation doesn’t possess as much of a „flashy“ element to it as it did previously.
Today, its purpose is not (just) to impress your training partners and, possibly, students – but it’s to deepen the understanding of BJJ within you, and to share it with the people you share the mats with.

Jiu Jitsu isn’t just a part of you, nor your life anymore. The effort you’ve invested, the values you’ve developed and grown on the mats, and the friends you met all contribute to a simple fact: BJJ is now who you are.