Here’s What Will Happen When Conor McGregor Fights Manny Pacquiao 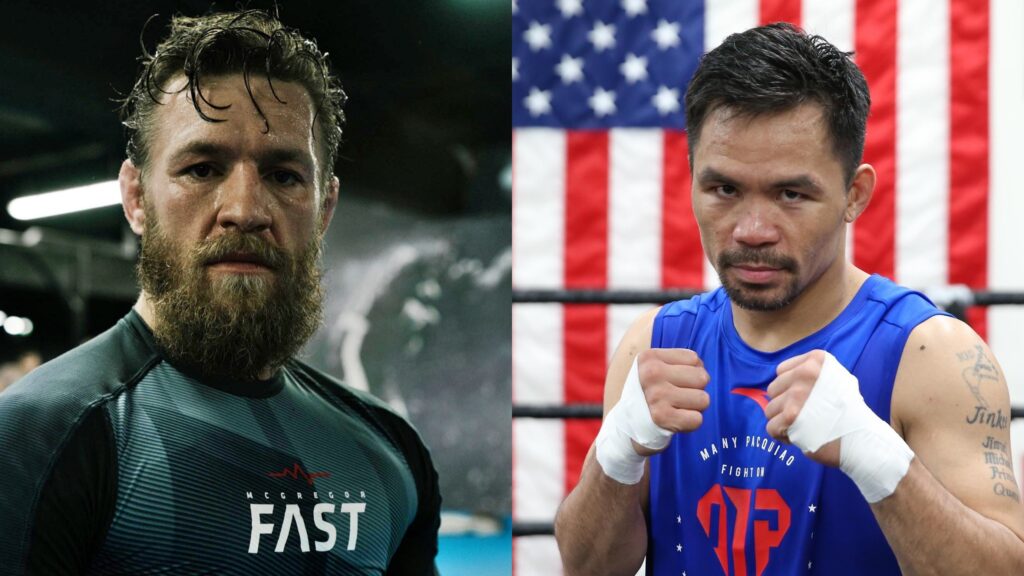 The sport of boxing has been known for its exciting and unexpected storylines for years. And 2020 isn’t any different. Fight fans were shocked to learn over the weekend that, at least in principle, former UFC featherweight and lightweight world champion “The Notorious” Conor McGregor will be making his return to the boxing ring in early 2021 to face eight-division boxing world champion Manny Pacquiao of the Philippines.

The bout has been in the works for quite some time now, and it appears the two sides have come to an agreement to stage an event in the Middle East, possibly in January.

Fans of both boxing and MMA have their interest piqued with such a compelling proposition. For one, McGregor and Pacquiao are two of the biggest names in fighting, albeit representatives of completely different sports.

McGregor is well-versed in multiple martial arts styles and is the highest-earning MMA fighter in history. Pacquiao, on the other hand, is nothing short of a legendary figure in boxing, having been arguably the most popular fighter in the world for the greater part of the last two decades. That makes this potential showdown between the two megastars a true spectacle.

McGregor famously made his professional boxing debut against Floyd Mayweather Jr. in August of 2017, losing in the 10th round by technical knockout. Although he boxed fairly well in the first few rounds leading up to the stoppage, Mayweather quite easily dominated the Irishman. Against Pacquiao, “The Notorious” faces an entirely different beast of a man with fearsome speed and power.

Most fans believe McGregor has no business being in the boxing ring with one of history’s greatest boxers, and that this fight likely won’t go the distance. Fans are in the right mind to adopt that train of thought, but there are other ways this bout could ultimately play out. Two scenarios are logical, while one is far-fetched (take a guess).

If you’re wondering how McGregor would fare against the fiery southpaw from the Philippines, we’ve analyzed the bout and discovered three possible ways this fight could go.

Today, Evolve Daily shares three scenarios that could happen when Conor McGregor steps into the boxing ring against Manny Pacquiao.

The first scenario, and most likely to actually happen, is that Pacquiao gets McGregor out of there early and in devastating fashion.

McGregor is a real fighter, through and through, with multiple weapons at his disposal. But competing in a limited ruleset hasn’t turned out well for him in the past. He will be at a distinctively tremendous disadvantage when he steps into the ring with a two-fisted monster like Pacquiao.

The Dublin, Ireland native will be competitive in the first couple of rounds, bouncing back and forth with confidence, whilst firing his vaunted left hand from the hip. But once he tastes Pacquiao’s power, “The Notorious” will quickly come to terms with how grossly disadvantaged he is in this fight.

Pacquiao, as he has done so many times in the past, will blitz McGregor with power shots from odd angles, bludgeoning his opponent with his short right hooks, and bullet-like straight left.

After getting past the initial shock to the system from being rocked by a Pacquiao haymaker, McGregor will retreat to the ropes, similarly to how he shuffled back towards the Octagon fence after being hurt by both Nate Diaz and Khabib Nurmagomedov.

Pacquiao, smelling an exciting finish for the fans (which has been elusive late in his career), will move in for the swift ending. Just like that, the fight will be over, and experts around the world will say, ‘I told you so.’

Winner: Pacquiao by TKO in round 3

On paper, Pacquiao beats McGregor in just about every category — speed, power, skill, and experience — except for one. McGregor, at 32, is a decade younger than Pacquiao, who turns 42 in December. Age could play a huge factor in this scenario, and McGregor will have just the opening he needs to make this an interesting fight.

Pacquiao’s physical decline has been evident towards the latter part of his career. He’s not as fast as he used to be, although he’s faster than most of his opponents even at his worst. The power and aggression that have overwhelmed foes in the past, has diminished.

Whereas previously, Pacquiao would be accustomed to teeing off on an opponent to no end, the Filipino has pulled back on his punches to conserve energy for the later rounds. As a result, he’s scored only one knockout in his last 12 victories, spanning the last 10 years.

McGregor is counting on the age differential to be a major factor, and for an ‘old’ Manny Pacquiao to show up in this fight. That way, he can capitalize on Pacquiao’s frequent lulls scattered throughout the 12-round affair.

In this scenario, McGregor would be able to land a few significant shots, and won’t be completely blown out of the water like in the first scenario.

However, an ‘old’ Manny Pacquiao is still a dangerous one, and still capable of pulling out the victory. Although it would be a closer fight, Pacquiao would still cruise to a unanimous decision nod on the judges’ scorecards, barring a late stoppage.

The last scenario, and most unlikely, is one where “The Notorious” shocks the world and stops the Filipino icon and effectively ends his career.

There is no doubt Pacquiao is at the tail end of a long and glorious career. He’s a battle-proven veteran who has been fighting for over 25 years. That’s a terribly long time to have been in the fight game. For all intents and purposes, Pacquiao is in the twilight of his time in the boxing ring. Like all fighters past their prime, he’s more susceptible now more than ever to defeat.

It will take a gargantuan effort from the Irishman to pull off a world-shattering upset of epic proportions, but in this scenario, it’s certainly possible. Using his expert timing and precision, McGregor could catch Pacquiao with his signature left — the “Money Shot” as he likes to call it — and stop the Filipino before millions of fans watching around the world.

This is also the most far-fetched of all scenarios and is highly-unlikely. But if McGregor would have any inkling of victory, he will be praying to the boxing gods that Pacquiao is depleted enough at this stage in his career to make this fight competitive.