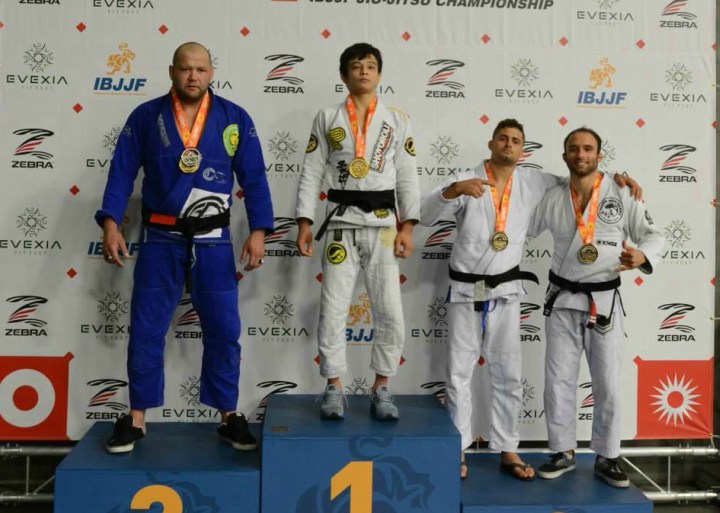 Although the gentle art of Brazilian Jiu-Jitsu revolves around the concept of leverage and using suitable techniques to enable a smaller, weaker, individual to overcome a bigger, stronger opponent — this isn’t always the case. If you’ve been practicing BJJ for awhile, you would know that most of the time, strength could negate many different factors. Although this goes against Helio Gracie’s ideologies, it is a real, growing problem for many smaller BJJ practitioners. The newer schools of Brazilian Jiu-Jitsu, with the Mendes brothers, Caio Terra, Cobrinha, Leo Vieira, and Andre Galvao at their helm, have brought forth new modifications of techniques that nullify a person’s strength. These techniques are more dynamic and fluid, much more dependent on timing and agility.

Through certain strategies brought about by these new techniques, perhaps the game of human chess could be more applicable to all BJJ practitioners, regardless of size:

Despite what people believe, there are positions that are easier for a smaller BJJ practitioner to maintain and control against a bigger, stronger opponent. The concepts revolve around circumventing one’s opponents strengths structurally instead of choosing to overpower them. For example, your choice of guard. Opting to open one’s guard, as opposed to using closed or half guard, wherein your opponent has the ability to put all his strength and weight on you is ideal.

In this video, BJJ World Championship Silver Medalist Almiro Barros shows 5 sweeps from the spider guard. The spider guard is a great open guard concept that allows you to control your opponent as you push on his biceps with your feet and keep him off you. When you use the spider guard, you use your legs and hips to create leverage. These are much stronger than your opponent’s arms.

Another example is opting to use sidemount as opposed to a full mount. The sidemount position allows you to be more mobile, giving you the space you need to transition to another position once your opponent escapes. The full mount is a risky position for a smaller BJJ practitioner because his opponent will use his hips to bridge out and escape, making him vulnerable to being passed and submitted if he does not recover quickly.

2) Use the gi strategically

Whether you realize it or not, one’s gi is much more than just a uniform. It could be used against your opponent — whether to submit him or control him. As someone smaller and weaker, you must use your opponent’s gi against him. Utilizing guards such as the lasso, lapel, and worm gives you more control over your opponent because it restricts his movement. To him, it may feel as if you are tying his limbs together with a rope, making him handicapped.

In this video, BJJ World Champion and ONE Superstar Bruno Pucci shows 3 sweeps from the worm guard. Notice how he uses the lapel to control his opponent and breaks his posture.

You can try all you want, but attempting to take a bigger opponent down and put him on his back is no easy feat for a smaller BJJ student. In fact, being small often means that you’re probably going to be taken down instead. Thus, you should take any chance you can to take your opponent’s back. When you have your opponent’s back, he is less mobile, giving you the upper hand in terms of control. Work on establishing control before executing a submission — and don’t worry, once you have the back, there are a variety of positions and chokes you can utilize.

In this video, submission expert ONE Superstar Shinya Aoki shows 5 different submissions from back control.

There certain submissions that are notorious for their efficacy against stronger opponents. As Helio Gracie once said, “for the choke, there are no tough guys“. As a smaller practitioner, you should opt for submissions that don’t rely on strength, especially those that allow your opponents to use their strength/physical attributes to counter the submission. The triangle choke against a guy with a thicker torso/neck for example, or armbar against a double jointed/flexible opponent — these simply wouldn’t work. Of course, all submissions, given the right situation, would work. However, to increase the chances of you finishing a submission, aim for the choke. Gi chokes, or any chokes for that matter, are one of the most difficult, if not the most difficult submissions to defend. Once they’re in deep enough, all you have to do is count to 10 (or even less sometimes) and place increasing pressure.

In this video, Almiro Barros shows a collar choke from the kimura. Almiro attempts the kimura, forcing his partner to defend, rendering himself immobile. Then, Almiro makes a slight adjustment to hold the kimura position while switching to a lapel choke.

Your choice of guard passing is very important, especially as a smaller BJJ practitioner. In BJJ, there are two types of passing: tight/pressure passing wherein you hold your opponent in place with increasing pressure, and loose/agility based passing, where you use your agility to circumvent your opponent’s guard and clear his resistance. Multiple-time BJJ World Champions Rafael Mendes and Bruno Malfacine who are in the lighter weight classes, use agility and speed against their opponents. They constantly move and switch positions, deflecting their opponent’s strength until they are able to stabilize themselves. However, agility based passing is more effective when used in tandem with pressure passing, especially at higher levels of competition.

Although size and strength aren’t supposed to matter in BJJ, sometimes, it does. But being smaller also has its advantages. Lighter students end up becoming more technical than their bigger counterparts, giving them an unexpected edge. They also get more of a workout, increasing pound for pound strength as opposed to those who are naturally stronger and more athletic.

So be more wary of the smaller BJJ practitioners in your next class – they may just have something sneaky up their sleeves!