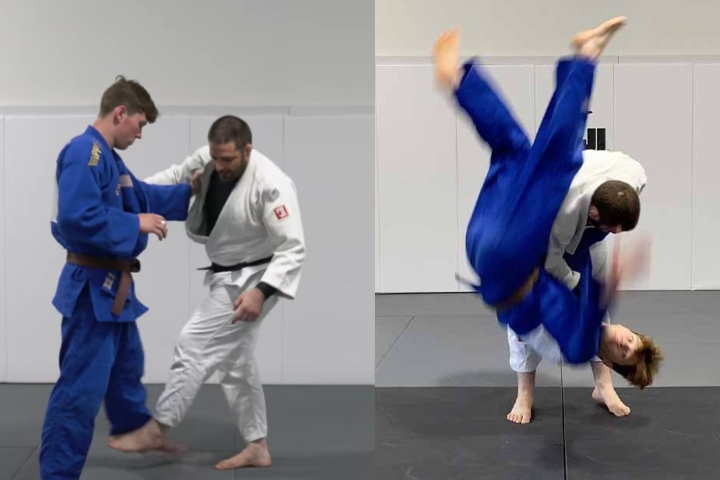 When you train grappling, there’s a ton of stuff that you have to learn in order to make a technique work. And this doesn’t mean that you just have to understand the way it works, nor that you only have to figure out all of its minuscule details; instead, it means taking all of this together and performing every step correctly, in the right order.
The same thing holds true for when you want to execute a throw. Its success depends on a lot of factors – but none of them can be performed well if you don’t first offbalance your opponent.

Travis Stevens, an Olympic Silver Medalist in the sport of Judo and a BJJ Black Belt under John Danaher, demonstrates two approaches to offbalancing your opponents with greater ease.

„SKIPPING“ YOUR WAY TO OFFBALANCE

Prior to the demonstration, Travis explains that these two setups will work very well when you’re fighting against someone who is an opposite-sided player to you; that is, against someone whose dominant hand is opposite to your dominant hand. So, for the sake of showing how that works, Travis uses his right hand while his student uses a left hand to grip the collar.
Also, notice how Travis grabs the student’s collar under the arm in this first setup, while in the second one he grabs it over the top of his arm. The second case, as he explains, isn’t something which is usually taught and done; but it’s his personal preference.

Now, Travis explains that the easiest way to start off is to fake going behind your opponent’s leg. This way, when they react by stepping back, you can use that to move them to the opposite direction.
In practice, Travis says that this means that you’ll have to practice your skip-step. Also, at the same time as you’re doing the skip-step, you’ll have to utilize the collar-gripping hand to first pull them towards you and then to push your pinky finger into them. This way, as you’re first pulling them and then driving into them, both actions will produce the result you want.

And the result? It’s the offbalance – which you can then use to snap their Gi and go for your throw.

FAKE IT ‘TILL YOU MAKE IT

The second setup’s a fantastic one! Travis uses it a ton and he sees it being utilized in high-level competition all the time! Let’s see how it looks like.

With an overhand grip on his student’s collar, Travis explains that you’ll need to have a little bit of feedback from your opponent. In practice, this means that you’ll be able to roll your shoulders a bit, so as to bump against your opponent with the collar hand when doing so.
Take into consideration that this feedback will come to good use for when you’re attacking the opponent’s lead leg but just can’t seem to go through it; no matter how much you try, you’re struggling to move it. And that’s exactly the situation from which Travis showcases his offbalance setup.

Simply enough, you’ll fake that you’re going after their leg – stepping to the side in a wide fashion. Once you’ve created that angle, you’ll use your other leg to sweep the inside part of the opponent’s foot.
Focus on how, as Travis does this to his student, he also pushes him with his body. This makes the student’s leg light; which provides Travis with an easy task of moving it and forcing the student to chase him – the result of a successful offbalance.

Watch Travis’s demonstration of these two setups on the video below: