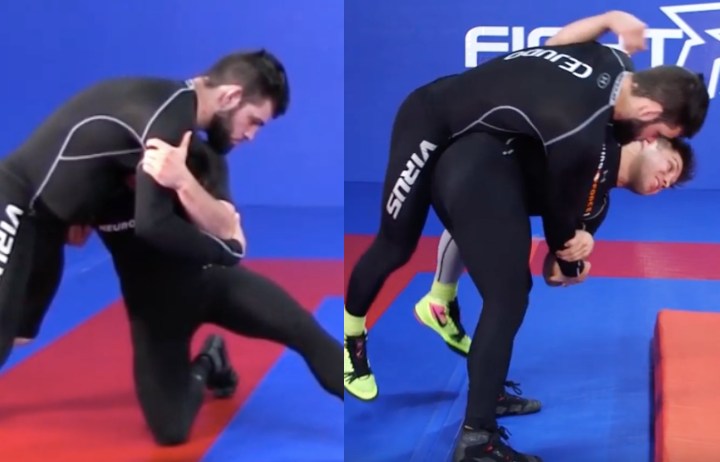 The hip toss is one of the fundamental takedowns in wrestling and a very versatile one with that as well; it can be used in order to either set up another takedown, or to recover from a failed one.

Henry Cejudo, an Olympic Gold Medalist, explains how to set it up from a failed sweep single leg attempt.

Henry Cejudo teaches that you first need to give your honest attempt to take the opponent down by using the sweep single leg – setting it up from the basic inside tie wrestling position (where you keep your arms inside your opponent’s body, grabbing their biceps or, as in the video, their triceps).

If your opponent has an adequate skill level, he/she will sprawl. That is where Cejudo’s approach comes into play.

2. Position your hands: go around their waist and grab their wrist

After the opponent sprawls, use your arm (the one that you used in order to go for their leg) and wrap it firmly around their waist.
The other hand needs to slide down from their tricep/bicep and grab their wrist. Or, as Cejudo points out, you can just leave it where it was, as its position doesn’t matter that much.

3. Use the momentum: pivot and step inside the opponent’s leg

After securing the positions of your hands, coach Cejudo advises to use the momentum you have in order to pivot and step inside your opponent’s leg – or, in other words, step inside his „box“.

4. Backstep and get your hips all the way through

Use the other leg to perform the basic backstep, thus ending up in your opponent’s box completely. Then, Cejudo emphasizes to get your hips „all the way through“ inside and below your opponent’s hip level, in order to get the maximum height and effectiveness for the throw – which you can then perform with absolute perfection.