Heavyweights, This is How You Should Train To Improve in BJJ 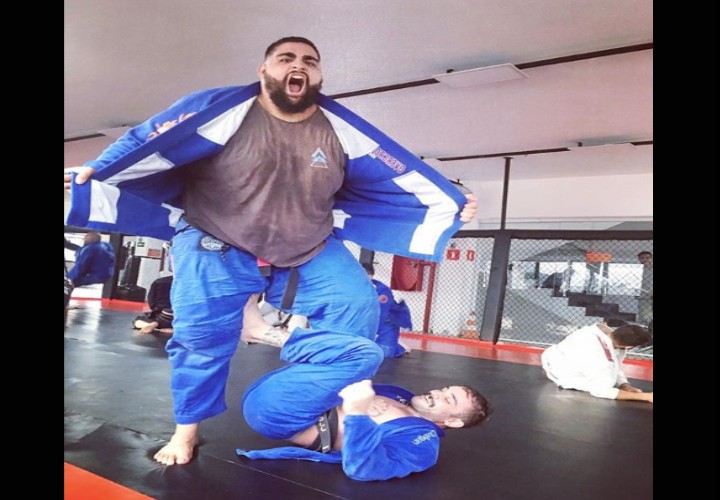 In Jiu Jitsu, we often hear stories of the smaller technical guy beating the bigger, stronger guy. This started in UFC 1 and will continue for probably however long grappling (and by default humanity) shall exist. Jiu Jitsu is a sport of the mind first, then the body, where technical superiority can conquer a less technical but more physically gifted athlete.

That being said, a technical and very strong and big athlete is certainly a force to be reckoned. In grappling, strength can make up for the lack of technical knowledge up to a point. Consider the following scenario. Consider two athletes in north south, the person on top having a kimura grip locked in. Now, if the guy on top is a conditioned ultra heavy athlete and the guy on bottom is a middleweight athlete (even if he is well conditioned), the guy on top would most likely be able to just break his grip through brute force, without requiring any technical details of grip breaking. Consider an armbar position, bridges from side control or mount. There are positions where strength can really make a difference. That being said, a ultraheavy who chooses to do that often should ask himself what will happen when he faces a equally strong opponent. Well, technique will be much more important in such a fight.

As such, let us have a look at some aspects of how ultra heavy guys should train.

This is probably obvious but most gyms don’t have too many big guys. That being said, big guys will usually have to train with smaller guys which means they will have a strength advantage. It might feel nice and the temptation will certainly be there to smash that guy in sparring, but don’t do it. Try using a similar level of strength (or a little higher if need be) as his and focus on using the technical details you’ve learned in order to achieve something. That doesn’t mean using your strength is unfair. It is yours so it’s fair to use, however keep in mind that the more you rely on it, the slower you’ll progress. If you can’t get out of something without brute forcing it, then let him get you, he is being more technical than you are. Learn what you have to do in that position from a technical point of view and do better next time. You will probably hear this a lot, but brute forcing your way through things will certainly hinder your development in Jiu Jitsu. This will become clear to you when you will compete and other ultra heavies will show up and be much more technical than you.

Look at the really small guys! As a general rule, smaller guys usually have to learn more technique to compensate for their lack of strength. Have a look at them, you might notice a couple of really advanced details you haven’t seen before.

Do not avoid the bottom.

One of the perks of being a big guy is you usually get to take people down and work the top side. But doing that will leave you with an underdeveloped bottom game. Remember, in competitions it might not be that easy and you might be forced to work the bottom. Accept the bottom position in the gym and learn to work from there. Learn to sweep, learn to submit and you will always have a backup plan for when your takedown game is not working, especially in competitions. We could take Bernardo Faria as example. His half guard and deep half guard techniques are developed to an amazing technical level and that is the reason why he is a world champion, not his physical attributes.

If you have a lot of extra weight, remember that falling on your training partners in awkward positions might injure them. Post a hand or elbow out sometimes to avoid big impacts with your opponents ribs or head. Injured training partners will eventually mean no training partners, so keep this in mind.