He Did it. BJJ Instructor Breaks World Record: Rolls for 30 Hours Straight 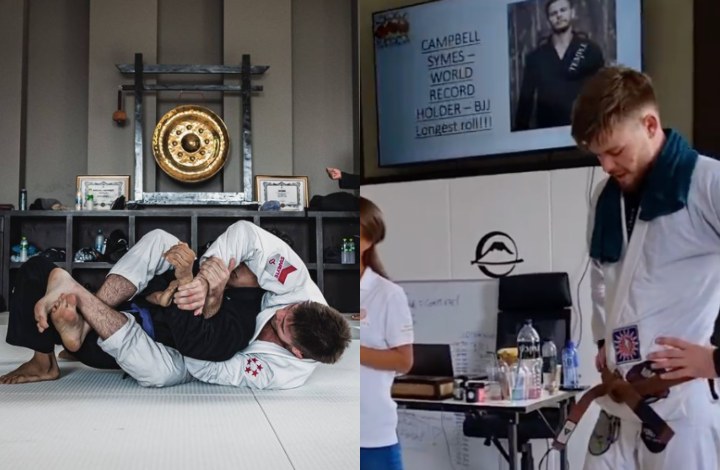 BJJ brown belt Campbell Symes has done the impossible: he beat the world record for the longest BJJ roll which was at 24 hours. He rolled for 30 hours!

The BJJ brown belt had an insane BJJ marathon at the beautiful Temple BJJ academy in Phuket, Thailand where he would roll non stop for 4 hours and would take short 12 minute breaks to go to the toilet, fuel up with Acai, change Gis, get massages and put on vaseline because his skin was all damaged.

He was supported the whole time by his teammates and other members of the BJJ community. Remember, Campbell also didn’t sleep for 30+ hours, and neither did many of the teammates.

Here was the grueling schedule he was following: 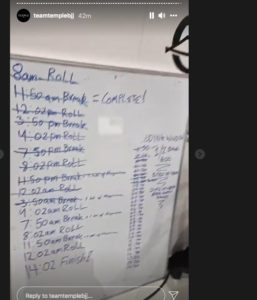 Campbell, moved to Thailand when he was only 16 years old and trained under 5th Degree Blackbelt Olavo Abreu. He is now one the toughest competitors in Asia and one of the coaches at the new world class facility Temple BJJ in Phuket, Thailand and is doing this world record for a good cause.

He is doing to help save a local Thai BJJ gym:

I am attempting to break the world record for the longest BJJ Roll, to help raise funds for RDC Gym in Phuket, Thailand. RDC is a local Thai gym that has some of the best Jiu-Jitsu kids athletes in the country. When Covid-19 hit and we lost our Jiu-Jitsu home, RDC opened their doors to us, welcomed the team and also gave me a chance to teach these amazing kids. Now Covid-19 has really affected the gym, parents can’t afford training and the gym is on the verge of closing. Please help donate to the future of Thai Jiu-Jitsu, and bring a smile back to the kids of RDC Gym.

To support the cause:

Campbell starting the first roll of the challenge with his instructor Olavo Abreu:

Even after going past 30 hours, he still kept going:

The last seconds of the last roll where he made history:

Originally coming from a small mining town in outback Australia (Broken Hill), Campbell came to adopt the Jiu-Jitsu lifestyle which has given him newfound confidence and potential. A football/ soccer fiend, he made the switch to Jiu-Jitsu full time shortly after starting 8 years ago. Shortly after he found himself living in Phuket training under professor Olavo Abreu for the better part of 5 years. Campell has won/ medaled in several countries including IBJJF titles, national/ state titles in Australia, all comps in Thailand (Siam cup, Copa de Bangkok, Ju-Jitsu national championship), Double gold in Vietnam, Philippines, Malaysia, and many more. Now he’s focused on coaching everyone to their full potential at our beautiful location in Nai Harn, Phuket. Campell’s titles include IBJJF PAN PACIFIC, PAN ASIANS, UAEJJF National Pro, GRAPPLING INDUSTRIES NO-GI advanced division, and many more.