Having Trouble With Setting Up A Strong De La Riva Hook? Do This 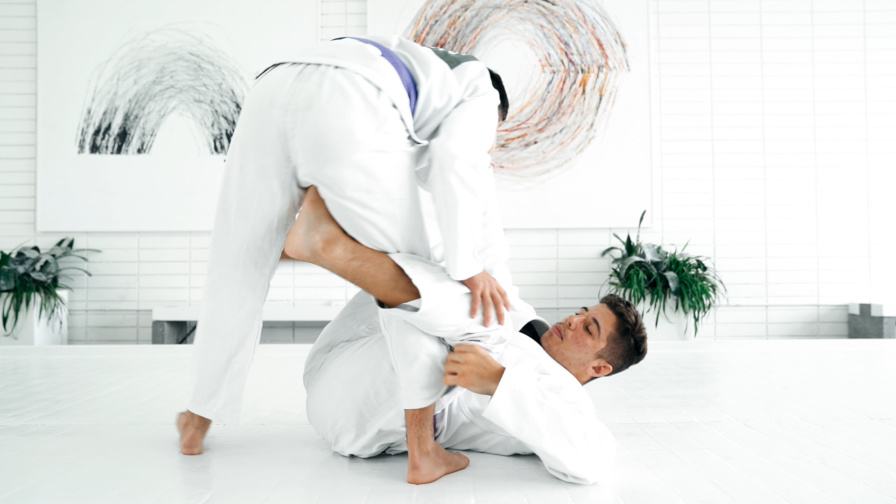 After quite some time spent at being infatuated with the No Gi game, it seems that you have finally understood that it’s not about „one or the other“; but that Jiu Jitsu is meant to be enjoyed in both its No Gi and Gi variant alike. So, you’ve started playing with the Gi setups a bit more – and, among other things, you’re totally up for seeing where a good De La Riva hook will take you!
But, how do you set up a strong De La Riva hook immediately from Open Guard… One that your opponents will have loads of trouble dealing with?

It is a good idea to pay attention to a really important point that Jon makes in regards to your grip game, prior to seeing how to actually establish a sturdy De La Riva hook.
Namely, Jon raises a point that you should set a goal for yourself to be well-versed in your grip game; don’t limit yourself to just one grip! Sure, there will always be positions and setups that you’ll prefer more than others… But if these ones are all that there’s to your skill set – if you know nothing else – then you’ll have a bad time when you roll.

In other words, you should seek out to develop several sleeve and collar gripping strategies. That way, if you fail in setting up one of them (perhaps the one you’re most confident in), you won’t feel like a fish out of the water. You’ll be ready to switch to your other, „okay“ grips; which you can then use to either sweep and/or submit your opponent – or to regain the grips you always go for.
This will make you into a more versatile Jiujiteiro. Therefore, start expanding your Jiu Jitsu gripping skill set!

HOW TO SET UP A STRONG DE LA RIVA HOOK

Now, Jon’s way of setting up a strong De La Riva hook, in this case from the Open Guard, rests its power on the previously mentioned grip versatility. That is, most of the times when you’re playing Open Guard, you’ll be going for a sleeve grip; but what happens is that your opponents won’t really let you do this, as they know a strong sleeve grip immediately from the beginning means trouble.
So, they keep their hand back. This is fantastic, because it opens up the space for you to grip their collar.

This cross collar grip is your first step. Then, Jon explains that you need to keep your far leg on the outside of the opponent’s legs; this is the leg which’ll establish the De La Riva hook. On the flipside, your other leg will post across the opponent’s torso, in almost a Knee Shield fashion; with the shin across the opponent’s body.
But, in order to make this happen, you’ll need to pull the opponent towards you with the collar grip. Make sure to do this pulling motion firmly, as well as to stay on your side throughout the collar-pull and „Knee Shield“ motion. If you’re flat on your back, you won’t be able to establish the hook.

After you’ve established this position, simply grab the opponent’s heel and then sink in a deep De La Riva hook. Make sure to turn your hips a bit to the side beforehand, as this’ll make it easier for you to get them „hooked“.
Once you’re here, you’ll have plenty of options for attack setups, such as sweeps and the Triangle.

Watch Jon demonstrate in detail on the video below: