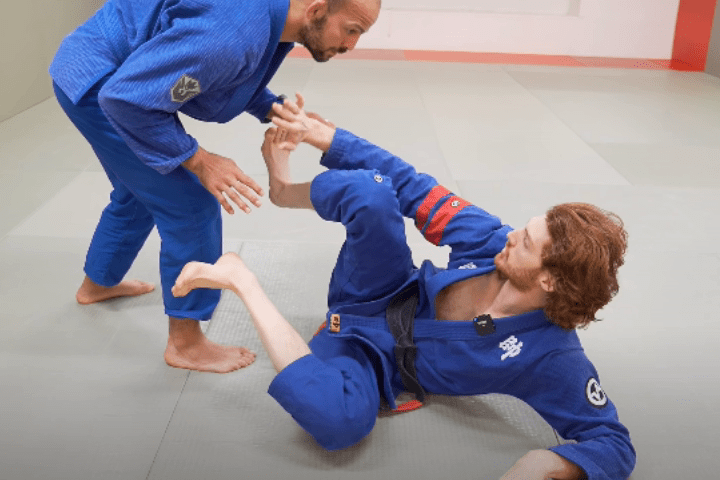 Being able to defend your guard from getting passed is a skill that every Jiujiteiro needs. And, if you’re looking to improve this component of your BJJ game, then you need to pay attention to the one aspect… That many other athletes are missing out on.
“Which one is it?” The answer is simple, really: grip fighting.

Professor Jon Thomas explains that a lot of Jiu-Jitsu athletes, for one reason or another, make the mistake of not grip fighting from guard. No, not from when you’re seated; it’s “easy” to grip fight then. What Professor Thomas points towards is grip fighting when you’re on your back.
You’ve probably made this mistake. You lay on your back and, as your opponent is trying to pass your guard, you aren’t trying to establish grips.

This is a grave mistake! Even when in an almost purely defensive position such as this one, it’s crucial to establish dominant grips. Both for the sake of defense and, as Jon demonstrates, because of offensive opportunities.
But how are you supposed to go about grip fighting from your back?

There are many things that you can do from Open Guard (on your back) when it comes to establishing your grips. However, Professor Thomas emphasizes that the most important thing is to catch what’s offered to you.
Don’t go for something just because you “want to”. Instead, be on the lookout for opportunities – what is your opponent offering to you? They’ll probably step in close, in order to initiate the pass, and at that moment you’ll either have the pant of that leg or their sleeve. Don’t reach out for the collar straight away, as it may be too far away from you and because such a move could pose a submission danger to you.

Watch Professor Thomas explain this in much more vivid detail on the video below: