Gracie Breakdown: 3 Ways To Defend Against The “Will Smith Slap” 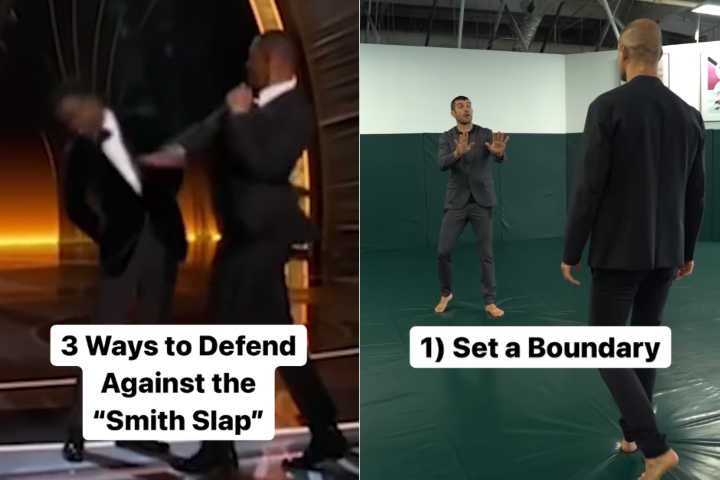 “Will Smith’s slap of Chris Rock” – this has been the headline, in one shape or form, of most of the world’s media for the last two days. Naturally, the news didn’t escape the Brazilian Jiu-Jitsu community, which had its own critiques of the entire ordeal. And, well, what sort of an ordeal would it be if Rener Gracie wouldn’t chime in with his Gracie Breakdown!
In a recently published Gracie Breakdown video, Rener shows three techniques for defending against the “Will Smith Slap”. Let’s take a look at them.

GRACIE BREAKDOWN: DEFENSE AGAINST THE “WILL SMITH SLAP”

1. Set boundaries: when someone’s approaching you and you don’t know their intentions, Rener advises you to set boundaries immediately. Stretch out your arms in front of you and tell the other side not to come any closer.
If they do continue approaching you despite this, then you know it’s on – and that you’ll need to either escape the scene or use your BJJ skills.

2. Protect your face: if the other person gets into your personal space, you need to get your hands up. Don’t leave them clasped behind your back, like Chris Rock did.
As your hands are up, take notice of the other person’s shoulders; whichever pulls back first, that’s going to be the striking arm. So, as the Will Smith Slap is on its way, you’ll need to reach over this arm and then establish full control over them.

3. Don’t joke about another man’s family: this one Rener directs to the other person – the one on the receiving end of the slap.