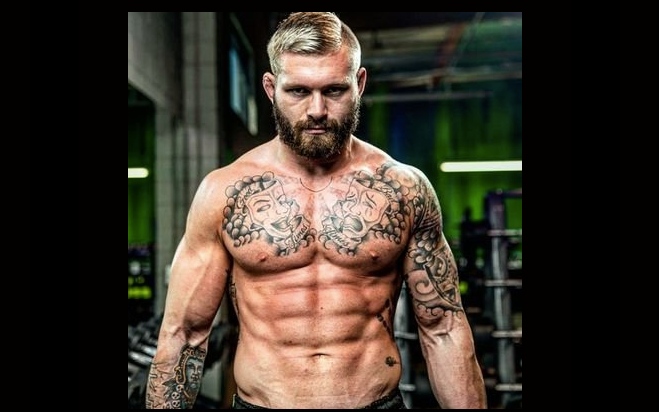 Today’s biggest No Gi grappling athlete, Gordon Ryan draws attention for his high-level game and also for his declarations off the mats. Last month, the American faced former teammate Nick Rodriguez at UFC Fight Pass Invitational 3 and won the bout in a somewhat confusing tiebreaker – having escaped the submission faster. The match was in the submission only format.

Shortly after the match, Gordon accused Nick Rodriguez of having greased to be slippery in the match – something that is strictly prohibited. Ryan, in turn, was accused of using PEDs, which are substances that increase the athlete’s performance and are prohibited in the vast majority of sports. In Grappling, however, there are no anti-doping tests.

In a text on his Instagram stories, Gordon Ryan defended the use of PEDs and criticized the use of grease “In case anyone noticed, there was a reason why I wore a long-sleeved rash guard in the ADCC final and a short-sleeved one in the rest. For the Fight Pass, I didn’t have that option. And stop b*itching about this ‘PEDs vs grease’ thing”.

“PEDs are allowed in our sport and that’s why everyone – even those most openly against them…  as we’ve seen recently – uses them. Grease, on the other hand, has always been illegal. If you are not sure about the effects of using oil I recommend you use it in the gym to see how impossible it is to do good Jiu-Jitsu like that. Grease yourself and try training with someone who normally has tight grips while you sweat. You will understand,” he concluded. 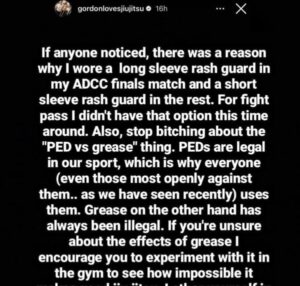 “17 ➡️ 26
180 ➡️ 230
Professional Jiu Jitsu is the most anabolic sport in the world. Everyone I compete against is abusing steroids. As a natural athlete in the world’s dirtiest sport I feel compelled to tell the younger generation to stay clean & chase technical superiority. Anyone can inject steroids & Fast track their muscle growth. It takes true discipline to build muscle naturally.”

Of course, Ryan couldn’t help himself and responded:

“The people most against PEDs are usually the biggest abusers. If you do a little research and compare their bodies from time to time they are built like Gods and some times they literally have tits. Must be fun building a career around blatant lies and having no problem selling it to the public.”

In the past, he has also accused 2019 ADCC bronze medalist Lachlan Giles of taking PED’s, when the Australian claimed that he was natural on social media.