Gordon Ryan & Roger Gracie Just Trained Together & It Was Epic 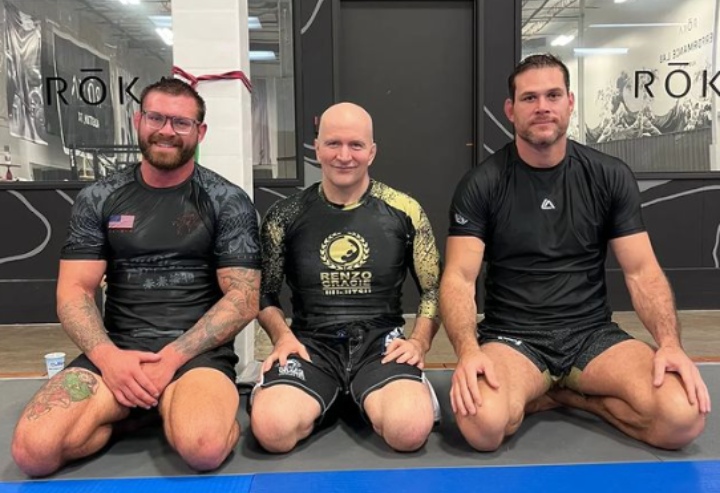 He talked about the experience:

“This was a bucket list item of mine. I’ve been waiting years to share the mats with the GOAT of GOATS. After a few rolls it is VERY clear as to why @rogergracie was as dominant as he was. I’ve spoken in interviews saying Roger was roughly 20 years ahead of the pack technically from 2004-2010 ish. After rolling with him today I can say with certainty he is still far ahead compared to the guys I compete against on a technical level. It was such an honor to have him on the mats with us this week.”

“The best two grapplers I ever saw: We had the privilege of hosting the great Roger Gracie @rogergracie at the gym today. Roger was by far the greatest Jiu Jitsu athlete of his generation and the greatest all round Jiu jitsu player of all time. He has always been a source of tremendous inspiration both to the jiu jitsu world at large and me and my students. Roger and I met many years ago in NYC and I have have always coached according to the ideal that he set of ruthlessly hunting for submission victory above all else. It was amazing to see him training once again with my students as he did so many times back in NYC. His game still looks incredible!! Roger is in Austin doing a podcast with @lexfridman I will write more tomorrow about this podcast – I spoke to Lex today and it sounds awesome! Stay tuned for more on Rogers thoughts on Jiu jitsu!”

Gordon has a no-gi grappling record of 96 wins and 5 losses with an 82% submission rate, and he hasn’t lost a match since his point loss to Vinny Magalhaes in 2018. With a record like that and wins over the best athletes in jiu-jitsu, the question is: Who is next for Gordon Ryan and who can beat him?

Roger Gracie who many consider the GOAT of Jiu-Jitsu with his 12 BJJ black belt world championship golds and 2x ADCC championships, was recently asked in an interview if Gordon Ryan was the greatest grappler in history. This is what he said.

“Roger, do you think Gordon Ryan can be the biggest name in grappling history?”

“He’s already making history in nogi.”If I analyze well, who is there to stop him?”

“Who are the names of those who wanted to fight him? that you think have a good chance of beating him?”

“I think there are several athletes in Jiu-Jitsu who obviously have a chance of winning him in no gi I think it’s a fight, no one is invincible.”

“But if you stop to think about a name that has great chances of winning, would he be the favorite?”

Gordon Ryan has in the past applauded Roger Gracie, emphasizing that the Gracie is the GOAT (greatest of all time):