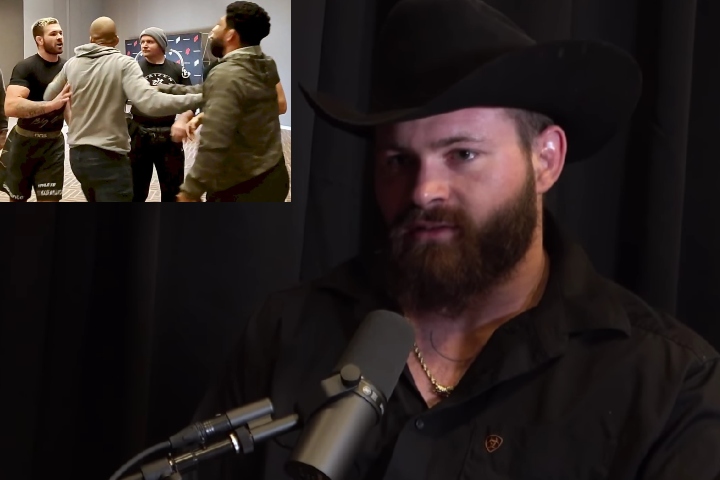 Gordon Ryan, Georges St-Pierre, and John Danaher were all recent guests on the popular Lex Fridman Podcast. In it, the four discussed many interesting ideas, anecdotes, and perspectives; one of them being Ryan’s notorious trash talking.
Gordon, for sure, understands the importance of backing up everything he says – or else:

He continues to explain how GSP is the reason why he actually started to trash talk:

I won my first EBI and I didn’t talk sh*t… And everyone was like: “Oh, you only beat Yuri because he was tired. If they had a rematch under any other ruleset, he [Gordon] would have lost.” And I’m trying to figure out what I’m going to do.

So, I’m scrolling through George’s feed one day, and he posted a clip of him beating someone. And I look at the comments – with [knowing that] George is the nicest person of all time – and if you look at the comments… It’s like 10,000 comments, and 9.900 of them are people just like: “All you do is lay and pray, you pus*y, you suck at finishing anybody.”
I was just looking at this and I was like: “People are gonna say what they’re gonna say regardless. They’re gonna talk sh*t regardless, so you may just say what you want and be yourself.”

Lex asks him about pushing the limits when it comes to trash talk – whether or not there’s a line he wouldn’t cross:

I basically play it per person. I basically fire up one step above of what they do. So I usually go hard; they fire a bullet and I drop a nuke. And after that initial shot, we just go back and forth, and I just keep one-upping them.

Gordon also goes on to explain how trash talking is all fun for him:

It’s just like a fun thing that keeps me occupied. Because, most of them that talk sh*t just say stuff that is factually incorrect. So I just argue with, like, actual statistics.
They’re like: “You suck, you’re not going to be able to beat this person.” And I’m like: “I’ve already submitted that guy.” It riles them up and it’s just a fun thing to do in my down time.

Gordon explains what made him slap Andre Galvao last year and about their upcoming ADCC superfight later the year: