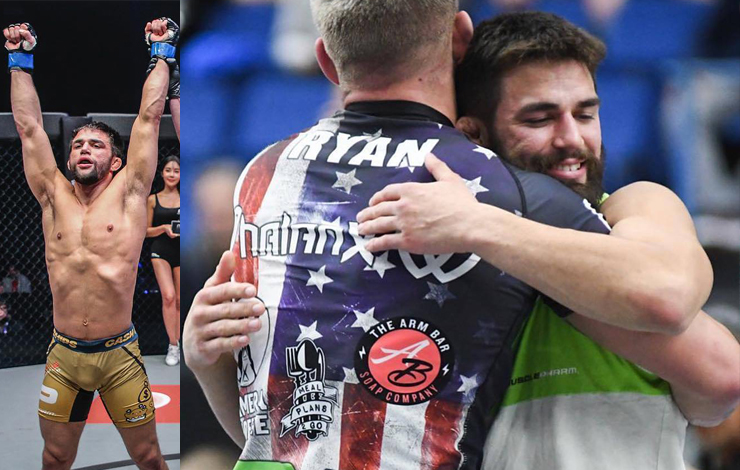 Garry Tonon has been responsible for introducing the world of bjj to Gordon Ryan. The 4-0 mma fighter, Tonon has recently had a barrage of post fight interviews revealing some interesting info in terms of when we can expect to see Gordon Ryan in a cage:

Of course Gordon Ryan is recovering from an LCL injury – an injury he had surgery to repair.
The likely timeline for transition is sometime next year!

“He he will be back to training mixed martial arts as soon as he’s able I’m sure and then I think we can probably look forward to a Gordon Ryan debut I would say not this year it would definitely be sometime next year.”

Just did an interview on the mma hour with @lukethomasnews and I’ve made my announcement. Cant wait for all the hate on this but I don’t give a fuck because it’s my career not yours. When I 1st put on the gi I thought i hated it because I sucked at it. A blue belt would make a strong grip and mess up my whole sequence. But after about a year of really trying to envelop myself as a student in the jacket and training with multiple world class black belts, including multiple time black belt world champions I realized I didnt suck and I was just as competitive with them as anyone else. But the training I was doing in the gi just wasnt as fun as the material I was learning in mma. Watching @georgesstpierre and @garrytonon prep for their fights excites me. I have chosen to give up on my quest to compete in the gi and focus fully on submission grappling and mma. I dont want to invest years into something that I dont enjoy as much as mma and has no relevance to real fighting. My goal was never to the be the greatest grappler of all time. It was to the be the greatest mma fighter of all time. That’s the whole reason I started training in the 1st place. I’m still white belt level in mma training so I wont fight for some time. But these are my current goals. Sorry for the people who wanted to see me succeed (and fail) in the gi but also excited for people who wanna see me punch others in the face. This is an exciting new journey for me to master 2 sports now instead of just one. My goal is to dominate the highest levels of mma eventually as well as the highest levels of grappling simultaneously. @hypnotik 📸 @behr_dan