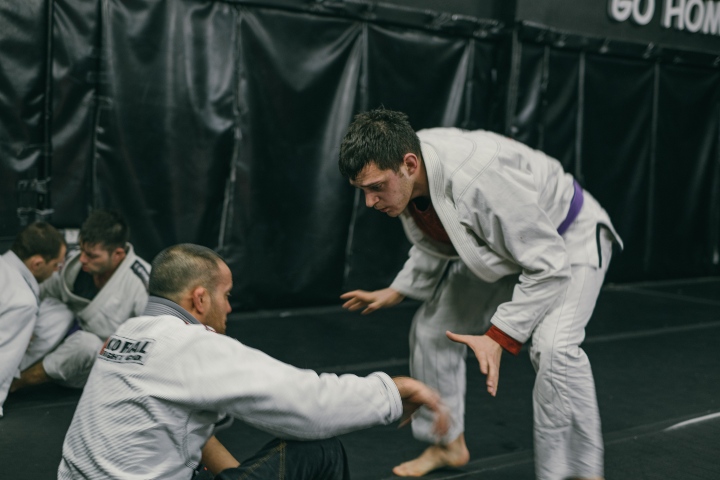 Guard passing is no easy business! There are many different elements that you have to take into consideration when approaching the training partner that’s laying on the ground, wanting to pass them and getting into a dominant position… And one of those elements is minimizing the chance of their guard recovery!
So, what is the one thing that you can do to improve your guard-retention-blocking success right now? Nick „Chewy“ Albin demonstrates a fantastic adjustment that you can implement immediately.

If you often find yourself in situations where you’ve really struggled to pass the training partner’s guard, only to have them retain it by turning their legs into you… Then this adjustment is made for you!
Chewy explains that this has been something that he’s struggled with back when he was a white, blue and even a purple belt; and that this detail has helped him tremendously in his guard passing game at that point in time. Furthermore, he emphasizes that you don’t really have to drill this adjustment all that much; or put in as much effort into making it work as it may be the case with the other ones. Instead, this one requires you to simply understand what you’re failing to do. And then implement it as often as possible; that is how this little principle will become ingrained into your muscle memory.

What if they, as soon as you finally create that space necessary for the pass, simply shift their legs back in-between themselves and you? This is not an unordinary situation, and it happens quite often. However, if you manage to block their near side hip, then you’ll have a much higher chance of successfully defending their attempts and of solidifying your position.

So, instead of focusing directly and solely on controlling your training partner’s upper body by squeezing the living daylights out of it, turn your attention to their hip. Now, Chewy explains that there are 4 basic ways to do this; you can either use your hand, your hip, or one of your knees. But whichever body part you get to use, the premise is still the same. Block the near side hip in order to incapacitate them from turning their legs into you.

OR AT LEAST CONTROL IT

But, of course, rarely anything is ever done as easily in a live roll as it’s done during a drill. Your training partners will be turning immediately, anticipating your attempts to subdue them. Therefore, Chewy points out that in those cases – when you can’t really achieve the goal of blocking their hip – you can turn your gaze towards controlling the hip instead.
For instance, if they’ve already successfully managed to turn their knee and are creating distance by using it, then by all means go both for clearing that knee and for the control of their hip at the same time.

To conclude, Chewy points out yet again that, back in his white to early purple belt days, he would expend a whole lot of energy into passing the guard and getting into Side Control, just to have his training partners and opponents easily retrieve it by pulling their legs in front of him. So, this little adjustment will reap benefits in terms of your BJJ journey – almost immediately!
Just remember that, once you’ve managed to pass someone’s guard, you need to get their hip blocked and/or under control. Once that’s said and done, you’ll have a much easier job of setting up a submission!

Watch Chewy explain this great adjustment on the video below: