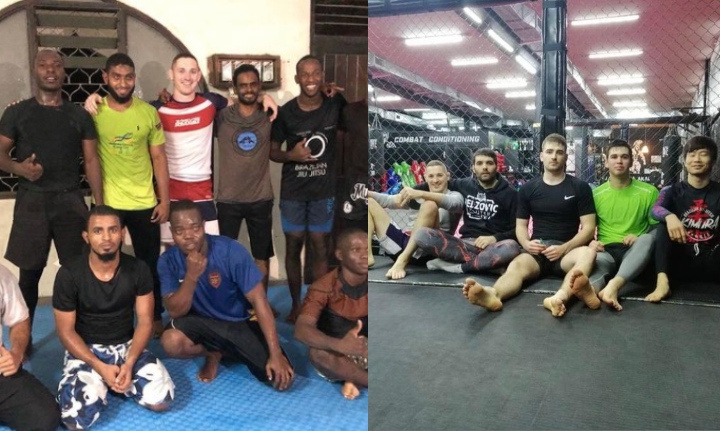 Jack Brown is a Scottish BJJ brown belt under Marcos Nardini who is currently traveling all around the world during this crazy Pandemic and training BJJ.

Jack quit his job as a Police detective, packed his bags and went training around the world. He is a top British competitor who has a very developed leg lock game. We sat with Jack to talk about his Jiu-Jitsu lifestyle:

1. Hi Jack, can you please introduce yourself to the worldwide BJJ community?

Hey! My name’s Jack Brown, I’m a brown belt from Kilmarnock, Scotland and I’ve been training BJJ for about 8 years. Until recently I had been working for the police in Scotland first as a cop and later as a detective but I made the choice to leave the police and go travelling with my lovely fiancee. Since then I’ve been trying to make a living as a travelling jiu jitsu coach!

2. Please tell us about your academy in Scotland?

I’ve received all my belts from 4th degree black belt Marcos Nardini who runs both MNBJJ Glasgow and Lycans Martial Arts Academy, Kilmarnock. Marcos is an amazing coach, a wizard in the gi and over the years has become a close friend. He recently fought in the Polaris Gi Teams event and gave a really good account of himself amongst some of the best guys in the world. Right around the time Craig Jones/DDS/EBI exploded onto the grappling scene I started to drift away from the gi and became obssessed with the nogi leglock game, I’d constantly be watching various instructionals and drilling them like crazy in the gym. Even though it wasn’t Marcos’ style he fully encouraged me to keep experimenting with different styles and he’s really helped me to become the player I am today.

3. How is the Scottish BJJ scene?

Admittedly I think we’re a little behind the English (it hurts my soul to say that) but we’re definitely getting there. The interest is rising all the time and we of course have Marcos, who I think on his day could beat anyone in the UK in the gi. We’ve also got guys like Kev McAloon, Seany Stewart and Craig SpiderMop McIntosh who have all represented us and won at a really high level. We also have a couple of UFC fighters in Paul BearJew Craig and Stevie Ray that have a really impressive level of jits but I think they’re pretty focused on punching people’s faces in just now. We’re getting better all the time and I don’t think it’ll be too long until you see a Scot at an ADCC or equivalent level event.

4. Tell us about your decision to leave the police force to focus on Jiu-Jitsu?

I loved my time with the police, I just really, really love Jiu-Jitsu more. I genuinely felt most of the time I was helping people that needed it, and of course the UK police don’t carry guns so I was using my Jiu-Jitsu to protect myself and others on a daily basis. But as any cop anywhere will tell you we don’t always get much of a social life and the long hours and the stress were really starting to affect the time I could invest in Jiu-Jitsu. I’m probably the same as most of your readers, Jiu-Jitsu is my therapy and if I’m not getting my fix my quality of life drops considerably. I got my brown belt in September 2020 and for the first time felt like I could make a genuine go at coaching for a living which has been my life ambition from the day I walked into Marcos’ gym. At the same time I met an amazing woman who’s been living in Asia for the past 5 years. Our plan is eventually to move back out to Asia and maybe even open a gym out there where I can do what I love.

5. You’ve travelled a lot this year. Where have you trained? Tell us about your experience.

So the initial plan was just to kill time until the border restrictions in Asia opened up but they’re dragging their feet so much that the waiting has turned into an adventure of it’s own. We went to Crete first where I trained with Morto BJJ in Heraklion and Studio Flow in Chania. Manolis at Morto is one of the nicest guys I’ve ever met in my life we still message all the time. Then when we were looking to move on Gile Huni at Kimura BJJ, Belgrade reached out and offered me a coaching position which was such a huge opportunity. I grabbed it with both hands and moved to Serbia like 2 days later. The guys at Kimura were solid, super high level jits, very welcoming and f*cking hilarious. You come to Kimura for the jits but you stay for the meme wars. The Serbian people are my kind of people. Currently I’m in Kenya working with a charity called the Lionheart Initiative.

6. Tell us more about your work in Kenya with the Lionheart Initative.

I relocated to Kenya in the New Year and teamed up with the Lionheart Initiative, a charity which helps to bring high level martial arts training to some of the poorest communities in Africa. I’ve been working with a team in Mombasa called the Mombasa Sharks providing free BJJ/self defence classes 4 times a week. The Sharks are training on a few donated mats in a side room next to a mosque, in the 30 degree Mombasa heat with no air con! I’ve been blown away and inspired by the Sharks’ energy and enthusiasm for the sport. They’re so attentive when I’m teaching class and do so much with so little. They’re often rolling around on dirty concrete floors because there’s not nearly enough mat space to go around. I’ve started a GoFundMe as well as teaming up with ReOrg charity to raise some funds to buy the guys extra mats and basic equipment. The link for the GoFundMe is in all my social media bios and any donation at all is appreciated so much.

7. How is it to travel around the world training BJJ and to adapt to each culture?

My thick Ayrshire accent is always going to be a stumbling block but it’s probably my favourite thing about travelling (up there with escaping the Scottish weather and all the amazing food). Every place I’ve went it’s like I’m doing a different sport. I’ve always been a dirty guard playing leglocker but some of the greco-roman style wrestling throws I picked up in Serbia will stay with me for life. My game’s changed more in the past 4 months than it has in the past 4 years and that’s just experiencing BJJ from several different perspectives. It’s been huge for my growth as a fighter and as a coach.

Right now my current obssession is getting these guys in Mombasa some new mats! They deserve it so much and a hygienic gym with enough space to roll around safely isn’t too much to ask for. After that who knows! I got engaged to the woman of my dreams in October last year and I’d really like to marry her before she sobers up and changes her mind so I suppose I have a wedding to plan in the immediate future. Right now I’m enjoying the ride, exploring different countries with my best mate and doing Jiu-Jitsu at every opportunity. I’ve never been so happy (and poor) in my life.

9. Where do you see yourself in the next 5 years?

That question would be so much easier to answer if Covid would just go away. The dream has always been to open a BJJ academy so fingers crossed I can do that somewhere in the world. I really want to experience Thailand and I’ll do that as soon as the world lets me. Other than that learn and experience as much BJJ as I possibly can and make myself the best coach possible for my future students. Maybe pick up a few competition wins on the way, break a few legs, who knows?