Four Tips for Judoka Getting Started in Brazilian Jiu-Jitsu 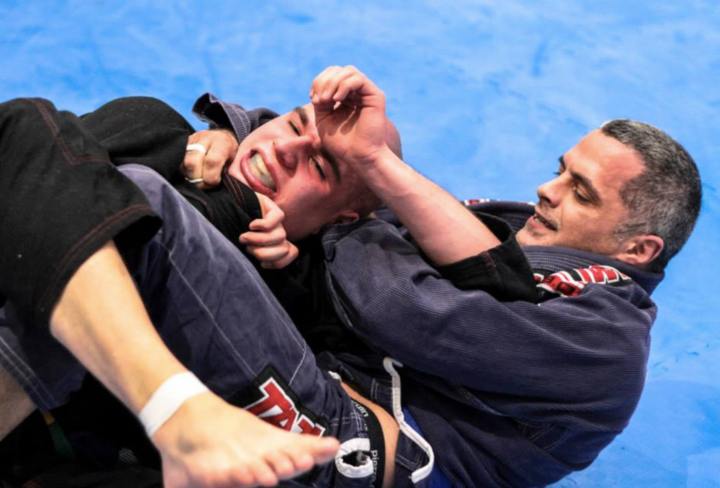 Judo and Brazilian Jiu Jitsu (BJJ) are close cousins. Anyone who knows the history of Judo and BJJ know that they have common roots—Mitsuyo Maeda was a Japanese Judoka, who transmitted the art to Brazil. Over the years, the two systems have diverged, with Judo being more of a stand-up art, while BJJ emphasizes controlling the opponent on the ground.

Because they have become highly specialized, an increasing number of BJJ practitioners cross train in Judo to improve their takedown game, while Judoka train in BJJ to improve their newaza (the Japanese term for ground techniques). This article is intended to give my perspective on training in BJJ after years of learning and teaching Judo. It is primarily intended for Judo players who are just starting out in BJJ.

(Note: while I have a black belt in Judo, I’m still a blue belt in BJJ. In other words, I’m a beginner. There are many accomplished martial artists who have achieved high status in both arts, and who likely have different perspectives than I do. But as the ‘beginning student’ memories are still fresh, hopefully others will find my experiences useful).

1) Learn Brazilian Jiu Jitsu for its own sake and not to improve your Judo.

Many Judoka start out in BJJ because they want to improve their Judo newaza. Certainly, BJJ can help you in Judo and vice-versa. However, this is the usually the wrong mindset to begin with. Judo newaza—at least for competition—is not the same as BJJ. Because of the rules in Judo, where pinning wins the match and the referee will stand up both competitors after a period, the flow and feel of Judo newaza is very different. Some habits learned in Judo will cost you in BJJ tournaments, and are especially bad for self-defense (e.g. stalling in turtle).

Instead, it is better for a Judoka training in BJJ to adopt a white belt mentality. This is very hard for some people to do, especially once they have achieved a brown or black belt in Judo. But it’s important to start with no preconceptions. Let go of your ego, and fully take in what your instructor is teaching. Because senior Judoka likely have some skill at newaza, it is easy to fall into the trap of telling yourself: “that’s not how I would do it,” “that technique really wouldn’t work,” or “I already know the basic stuff, I just want to learn advanced techniques.” There is usually a method and reason behind the training, and it is better not to second-guess what is being taught—not to yourself and especially not to other students.

If you want to train for Judo competition, do Judo newaza. If you want to learn BJJ, enjoy your new journey for what it is. Start at the bottom and learn everything that is being taught with fresh eyes. You might be able to hang with some of the blue and purple belts, but chances are you have a lot to learn.

Let’s face it, most BJJ schools don’t teach takedowns very well. Some schools will start training (rolls) on their feet, but usually with some rudimentary throws and sweeps. Other schools almost always start on their knees. Chances are, especially for more experienced judoka, you will be able to take your training partner down from either starting point, and get a top position quickly. Good for you, but if you are always taking a dominant position, you are only learning half of the game.

Being good at BJJ is not just about getting a dominant position and submitting your partner. Sure, getting a joint lock or choke can be satisfying, but it’s only one skill among many. It’s also important to learn how to adapt to pressure, maneuver from the bottom, and get out of tough situations. Sometimes it’s better to allow yourself to be thrown, put on bottom, and work your way out. If you always rely on the thing you are good at—and for judo players, it’s the takedown—you will never improve aspects of the game where you are lacking.

3) Get comfortable on your back

Like in wresting, getting pinned in judo means that you lose. Judo newaza often starts from turtle, either because the person was avoiding a throw to their back, or because they are trying to prevent a pin. Looking up at the ceiling with someone on top of you is a judoka’s worst nightmare. So, they often panic, writhe, and flail around, desperate to get out.

In sport BJJ, someone taking your back will cost you points. In self-defense, ending up on your belly can mean strikes to the back of your neck that you don’t see coming. Simply put, it’s a bad habit that is encouraged by the rules of judo.

Learn to stay calm while on your back, protect your arms and your neck, and work your escapes methodically. Getting pinned is not the end of the world. Keep your head clear, protect yourself, and you will be fine.

4) The pace is completely different; learn to slow it down

BJJ is often compared to a chess match. It is certainly physical, but it is also calculating, methodical, and cerebral. Judo is more like two silverback gorillas fighting for alpha male status. This is especially true in judo newaza, where pins and submissions have to come very quickly, before the referee stands the competitors back up. This means that judoka are trained to go for the kill as soon as the fight goes to the ground.

This mentality certainly has its benefits. But it’s also exhausting, and tends to rely more physicality rather than superior control. As we get older, it’s also harder to execute. It is extremely frustrating, but also beautiful, when someone can work an armbar or choke, moving through each component at a measured pace, and there is nothing you can do about it. A skilled BJJ practitioner knows how to shift their weight, create frames and blocks, and apply pressure just right, so that speed and physicality are less important to getting a submission. It’s about control, not explosiveness.

So learn to slow it down, control the pace, and focus on breathing and correct posture. There is plenty of time to set up the submission, just go through the steps carefully and perfect each micro-position. You will find that if you think about what you are doing and make small adjustments, you will be able to get that arm or collar choke without exerting too much effort.

Learning Judo and BJJ will give you tremendous advantages. They are related arts, but not the same. In the future, I’d like to see more cross-training across grappling styles. Thankfully, more and more people are starting to recognize the benefits of each.