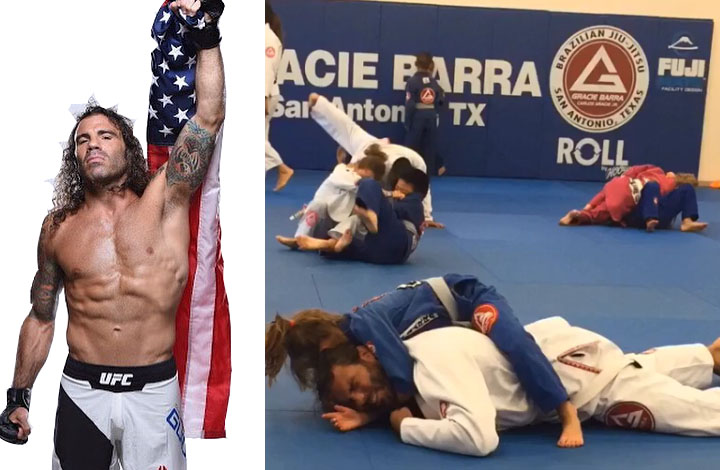 Clay “The Carpenter” Guida is training jiu-jitsu in a gi! The 34 year old Alum of Strikeforce, WEC and Shooto chose to join the Gracie Barra team training out of San Antonio, Texas for the duration of his family holliday.

Clay Guida is an excellent wrestler known for his great flexibility and endurance. One other interesting tidbit? He is a black belt in gaidojutsu – Greg Jackson’s system including all aspects of MMA: striking, wrestling, submissions and self defense.

Who is that white belt… :):):) from @gbsanantonio – We had a very special guest in San Antonio today! We are very honored to have instruction from a very experienced and prestigious martial artist! Thanks again for your time and support @clayguida! #mma #jiujitsu #graciebarra #bjj #ufc #sanantonio #Regrann

Post Daddy’s Day Giajitsu class with this little monkey was a blast. She’s having so much fun, and really likes helping her teammates. Thanks to @graciebarrasa for inviting me to join class and help teach these happy little Ninjas. @graciebarra #ufc @ufc #jiujitsu #grappling @baratagb @tussagb @activ8media #activ8media

Of course the seasoned champ who once scored victories over notable UFC fighters like the current lightweight champion Rafael Dos Anjos and a former one – Anthony Pettis is thrilled to have inspired his daughter to do bjj. (It’s interesting to note Clay Guida also managed to score a victory over the much buzzed about Nate Diaz way back at UFC 94)

Guida has last fought at UFC 199, a couple of weeks ago- where he lost via KO in the third round. His MMA record stands at 32 wins, 17 losses. Interestingly enough close to 50% of his wins and losses came by way of submissions.