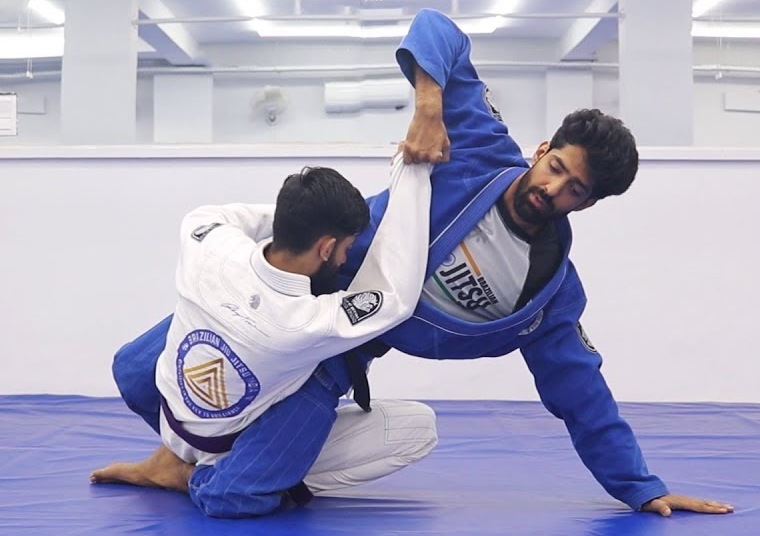 Hip Bump Sweep also known as Getup Sweep or Situp Sweep is considered as one of the staple technique in Brazilian Jiu Jitsu. Quite often the effectiveness and the details behind this technique is overlooked.

The first BJJ Black Belt from India, Arun Sharma shows how to effectively use this sweep in this instructional video which includes sweep setups, follow up techniques, proper body mechanics, injury prevention tips, common mistakes, solo drills and few other elements of the technique.

Hip Bump Sweep is widely used from Closed Guard but the mechanics of the technique can be used from various other positions as well.

From the closed guard the most important thing to understand while executing this technique is the distance between you and the opponent. As the sweep requires to getup on your palm, If the opponent is keeping a low posture within the closed guard is becomes quite difficult to sit up and execute this Sweep.

So the best time to start the sweep is when the opponent is leaning backward or have a straight posture giving you the opportunity to sit up on your palm and connect the front of your hip to opponent’s body.

Once you are into the Situp position with your hip connected now it’s time to bump your hip forward while trapping the same side arm of the opponent to prevent him from posting out and sweep the guy over to establish the top position. Most often it ends up with full mount rewarding 6 points in a competition, 2 for sweep and 4 for full mount.

During this sweep the opponent can react in few different ways, They can try to post the arm to avoid the sweep exposing themself for a kimura or a triangle choke. Also they can try to hug you and drive you back to the mat exposing their neck for a guillotine choke.

Arun says as most people nowadays are at home so they will be training this sweep at home so he has showed a Solo Drill as well as a Partner Drill to improve your technique.

It’s very important to understand how to avoid injuries while practicing this move. During Hip Bump Sweeps a common injury which people face is a twisted ankle or a strained shoulder due to posting the arm to avoid the sweep. Arun and Varun demonstrate few great tips to about these injuries and safely practice and execute this sweep.

The Instructional Video also covers few most common setups and the proper timing and body mechanics of the hip bump sweep.

To know more about Arun Sharma and his BJJ academy in India, You can visit – www.bjjindia.in