Finally Make The Mir Lock Work For You 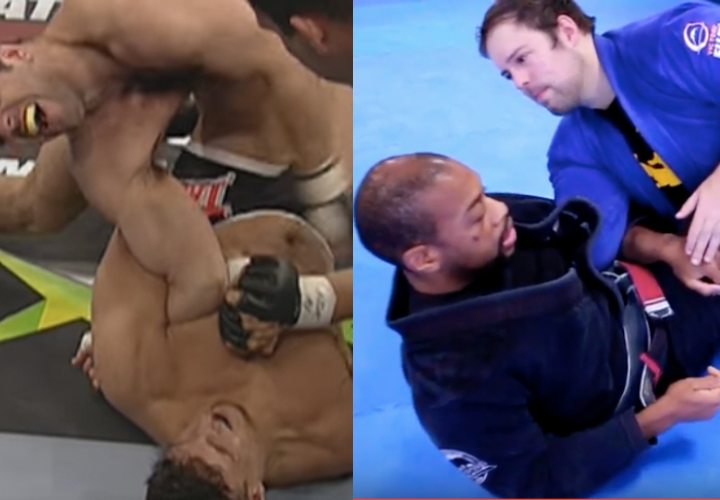 *Dramatic music plays in the bacground*: the Mir Lock! A powerful, shoulder-lock based submission that gets heads (and rotator cuffs) turning whenever it is applied properly. However, it is not seen as often as every jiujiteiro would like it to be.
Kenneth Brown, a BJJ black belt under Mike Moses, says that it is a submission that has eluded him for quite a bit of time as well – but that he has now understood what makes up for a great Mir Lock, one that you’ll be able to constantly hit both in training and competition.

The overhook is important, but…

Kenneth starts by being in his training partner’s closed guard, saying that initially it is about having the overhook. However, to make the Mir Lock work for you, you also need to create a good angle and you have to respond to your opponent’s escape attempt in a very specific way. Once you get these things down, you’ll be able to consistently make this attack work for you.

Let them pull away – and sit up with them!

So, you’ve set up your closed guard and established your overhook – you can now get to work, says Kenneth. However, first things first: beware not to make your overhook too tight. Instead, have it loose just a little bit – as this will give your opponent an initiative to start pulling away. This is the reaction that you want.
And why do you want it? Because when they pull away, you want to sit up with them. That’s where the catch is; as they pull away and you sit up, it forces their arm to bend.
Now that their arm is bent, you can start setting up your Mir Lock. First, punch with your overhook arm towards their hips and open up your legs.
As you do this, scissor your hips in order to move them to the side. This is the crucial part that a lot of people get wrong: you don’t shrimp, but you scissor! In other words, you are not pulling your hips away, but they stay in the same plane, in the same line as they did beforehand! It’s just that you move them to the side a bit.
This will bring your opponent’s elbow next to your hip, an opportunity that you can use to lock your arm to your far-side thigh.

To finish the Mir Lock, Kenneth says that you have two options: you can either move your hips back in towards your opponent, squaring up with their own and locking the guard in order to make your submission even tighter. Or you can simply lean back and place your foot on their hip, then getting the finish on the Mir Lock.
One other great piece of advice that Kenneth has is that you can also switch up your hand placement to a cable grip, in order to make the position as tight as you possibly can!

That goes on to say that you should follow Kenneth’s pieces of advice and that you should continue working on your Mir Lock!
Be sure to watch the video below to see Kenneth explaining all of these details in action: