Felipe Costa: “Caio Terra As A Teenager Was Asking So Many Questions About techniques That He was Forbidden To ask Anymore.” 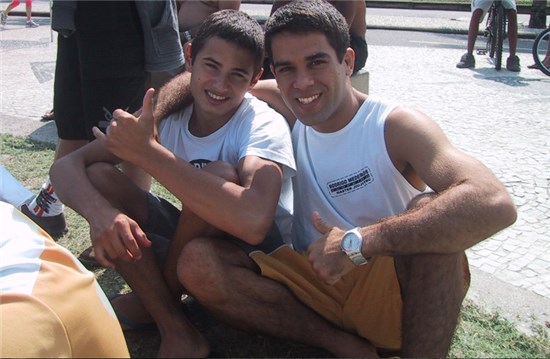 Felipe Costa talks about his one time student Caio Terra, in his website brazilianblackbelt.com. He has known Caio since he was a little kid:

I met Caio Terra when he was still a teenager. As a BJJ student he was very curious and asked many question concerning techniques. I remember when during one of classes taught by Comprido, Caio was even forbidden to ask too many questions, since he was not leaving any space for other students .

I brings me a lot of joy when I hear him saying that I have influence his game and helped him become better both in and out the mats
Caio and I became good friends and I would often go to train in his house. He reorganized his space, removing the bed and placing mats on the floor. A bit later, Caio convinced his mother to tear down a wall, so we were able to fit more mats. Like this we had a bigger space to roll and up to this day I have no idea how did he persuade her.

With the bigger space more friends from different academies would come to train there. In effect Caio was breathing BJJ, and that for sure had helped him to improve so fast. Many times I went there in the morning to ring the bell and get him out of the bed to roll. For a while we were a group of 5 or 6 regular friends and for a while I found myself training more often there than in my academy.

Later on Caio received an invitation to teach in US and you all know the story from then on.

Caio is an awesome kid, very respectful, very loyal and honest! He is a polemic guy but stands up for what is right. I am happy that despite the distance between us, we have managed to keep a close friendship for so many years, and I feel honored to have him as a close friend.