Fan with Wrestling Background Asks Khabib Nurmagomedov To Wrestle Him 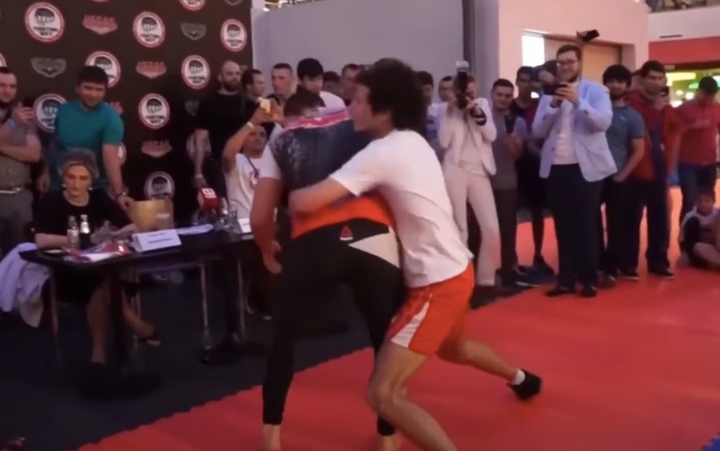 Retired UFC lightweight champion Khabib Nurmagomedov has become one the biggest & most loved sports stars in the world. Wherever he goes, he is welcomed by a sea of admiring fans.

In this seminar in Russia, he was asked by a Wrestling fan, to wrestle him. Khabib did just that and showed just how technical he was.

How does it feel like to grapple with Khabib and how god is his wrestling and grappling?

In an interview, former opponent Dustin Poirier explained how it truly felt like to go against Nurmagomedov:

[Khabib did] not feel super strong. None of these guys that I’ve fought felt too strong, like overwhelming… But it was just that his position and his balance was so good. He knew where my weight was, where it needed to be [in order] to get in a better position. He is just so advanced. And his feet are like hands… His foot sweeps and the way he braces you down is… It’s just good. Yeah, he’s good. So good.
And nothing feels forced. It’s like he’s gentle, almost.I mean, I got smothered. And my goal was to turn that into a fight. For it to be a fight… And he just smothered me and kinda did what he does.
I couldn’t, I couldn’t stop it. [Even though] I’ve been grappling for a long time.