Examining Strengths and Weaknesses of the Major Grappling Arts 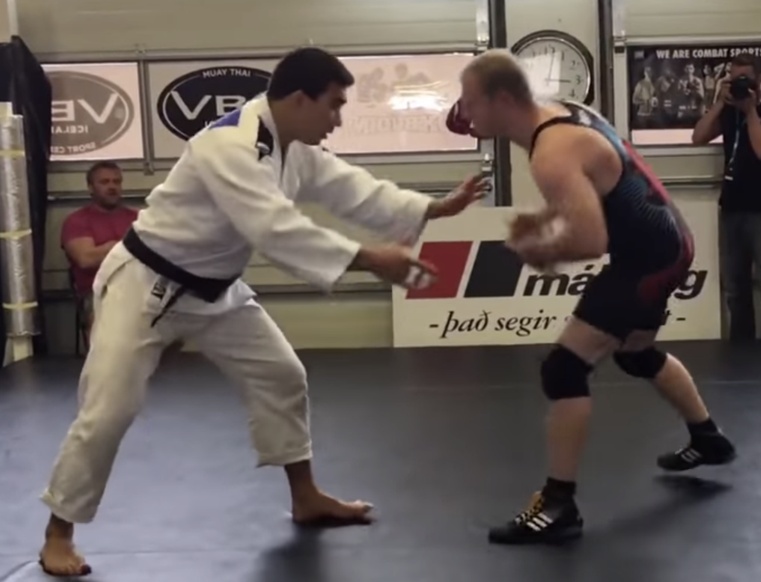 ‘Grappling’ refers to techniques, maneuvers, and counters applied to an opponent in order to gain a physical advantage, such as improving relative position, escaping, submitting, or injury to the opponent. There are many forms of grappling. The most popular forms are Judo, Brazilian Jiu-Jitsu, Wrestling, and Sambo. There are also some minor forms (or less popular) such as Catch Wrestling (the origin of Brazilian Luta Livre), and pretty much every country in the world has its own form of traditional folk Wrestling.

In these Grappling arts, the object is either to take down and pin the opponent, or to catch the adversary in a specialized chokehold or joint lock which forces him to submit and admit defeat or be rendered helpless (unconscious or broken limbs). There are two forms of dress for grappling that dictate pace and style of action: with a jacket, such as a go or kurtka, and without (No-Gi). The jacket, or “gi”, form most often utilizes grips on the cloth to control the opponent’s body, while the “no-gi” form emphasizes body control of the torso and head using only the natural holds provided by the body. The use of a jacket is compulsory in judo competition, sambo competition, and most Brazilian jiu-jitsu competition, as well as a variety of folk wrestling styles around the world. Jackets are not used in many forms of wrestling, such as Olympic Freestyle, Greco-Roman wrestling and Grappling.

We all know Brazilian Jiu-Jitsu, Wrestling, Sambo, Judo, etc and probably each of us has an affinity towards one or the other and believes one of them is the best. However, an in depth analysis will point out that each grappling art has some strengths and some weaknesses, depending on the ruleset, range of techniques, etc.

Let us analyse the major grappling arts and see what each has to provide aswell as what are the draw backs. Strengths:
-There is no other art that provides the in depth perspective at ground fighting that BJJ does. Footlocks, chokes, joint locks, even some more exotic techniques that can attack the spine itself. BJJ provides the best technical knowledge when it comes to ground fighting. This is also because BJJ is practiced both with a gi and with no gi, encouraging students to develop their technique and understanding of grappling in both ways.
-Another strength of the sport is the fact that it teaches it’s students how to fight off their back. Before BJJ, being on your back was seen as losing the fight. BJJ turned that on it’s head and allowed users to fight and even defeat their opponents while on their back. In modern MMA, that may not always be the case but keep in mind that in modern MMA (especially at the highest level), almost everyone is a BJJ blackbelt.

Weaknesses:
-This ties in with the strength number 2, however it relies more on the user/academy than the art itself. Currently, the ruleset in BJJ competitions allows for what is known as guard pulling, which is basically sitting down, accepting the position and working from the bottom in order to sweep or submit the opponent. While this can work very well in a environment where hits are not involved, in a MMA situation it would make the fight very hard (assuming the technical gap between the two isn’t too big) and would put the bottom fighter in a bad position. However, proper BJJ academies will teach takedowns, encourage them and do takedown sparring regularly. Strengths:
-Provides the student with the mental attributes needed in a fight (aswell as modern MMA). Wrestling is the kind of sport that provides the student with the go all out mentality, the mental toughness and resilience required to pull through in any situation. Once a wrestler initiates a takedown, he will not stop until his opponent is down (unless his opponent is better than him and thwarts his takedown attempt completely that is). This is one of the reasons why wrestling is probably the best base for modern MMA.
-Solid takedown defence and offence skills allows the student to decide where and how the fight will take place. If a fight takes place or the student is in a MMA Match, he will have the advantage of dictating where the fight takes place, be it on the ground (thus he will initiate takedowns and go through with them) or standing (will be able to defend takedowns very good should he be required to).
-Provides students with very good physical conditioning. Wrestling is one of the most physically demanding sports on the planet and there are few other sports that will naturally (without weight training, etc) build it’s students with such explosiveness, strength and endurance.
-Provides users with a solid base when ground grappling. Wrestlers are known for having a very solid base when engaged in ground fighting and while not being invulnerable to sweeps, they are harder to sweep than other students who have not practiced wrestling.

Weaknesses:
-No submission knowledge and very little ground fighting skills (mostly related to pinning the opponent). While wrestling provides very good takedown and pinning capabilities, it provides no insight into the submission fighting that takes place on the ground, thus leaving it’s students exposed to such techniques. Most commonly in submission fighting, wrestlers get their back taken and get submitted by chokes.
-Body stress. While it is a very demanding sport and one that provides physical abilities, it is also one that puts a huge stress on the body (including here the weight cutting stress). The very nature of the sport will cause wear and tear on the body and it’s effects will most likely be seen few years down the line.
-It is only practiced No Gi which means kimonos aren’t used. While not a big disadvantage, it leaves students severly exposed shall they decide to engage in grappling contests where kimonos are involved or if they engage in a fight where clothes are involved. Sambo is probably the most practiced combat sport in Russia. The word SAMBO is an acronym for SAMozashchita Bez Oruzhiya, which literally translates as “self-defense without weapons”. Sambo comes in three styles :
Sport Sambo – Grappling only, not allowing chokes.
Combat Sambo – Resembles modern day MMA, allowing strikes and grappling.
Freestyle Sambo – Similar to Sport Sambo, but much more permissive when it comes to allowed submissions.
In this article we will focus on freestyle samba.

Strengths
-Very good leg locks. One of the characteristics of Sambo is the emphasis on leg locks, making Sambo fighters very profficient on leg attacks thus making them a real danger in grappling competitions for those who like to pull guard.
-Emphasis on takedowns and submission oriented grappling. The competition rule set awards points for takedowns aswell as pinning the opponent for 20 seconds (total work time on the ground being restricted to 60 seconds) thus encouraging a takedown and submission oriented grappling.

Weaknesses
-While the limited time on the mat encourages a submission oriented grappling, it also takes away the calculated approach which would work but requires time, forcing competitors to work at a fast pace, perhaps leaving gaps which would otherwise be exploited in other grappling competitions with a longer time on the mat.
-Standing submissions are not allowed. One of the disadvantages of Sambo is that standing submissions are not allowed thus making their students unexpectant towards guillotines when going in for a takedown and generally oblivious to such submissions. Judo is a modern martial art, combat and Olympic sport created in Japan in 1882 by Jigoro Kano. Its most prominent feature is its competitive element, where the objective is to either throw or takedown an opponent to the ground, immobilize or otherwise subdue an opponent with a pin, or force an opponent to submit with a joint lock or a choke.

Strengths
-Gi oriented takedown emphasis provides a good base for Judo competitors to start training BJJ aswell as competing in any gi grappling event.
-Judo competitiors have excellent balance and base to rely on, making them hard to sweep or takedown.

Weaknesses
-Does not allow the competitors to go for leg takedowns, thus limiting their takedown arsenal.
-Only the elbow and the neck (just chokes, not neckcranks) can be attacked, thus limiting the submission arsenal available.
-Lack of no gi training makes the transitioning to MMA / No Gi Grappling difficult at least in the early stages.