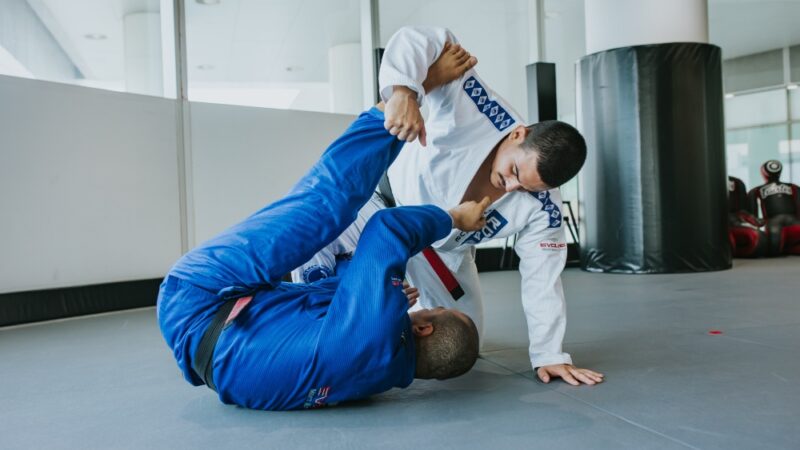 One of the most challenging aspects of Brazilian Jiu-Jitsu is developing one’s guard. The guard in BJJ is a defensive position where you use your body as a shield to prevent your opponent from moving to pins such as side control or mount.

Having a good guard is exceptionally beneficial for both grappling and MMA because it helps minimize attacking options from your opponent; it is, therefore, essential to select guards that fit your overall game.

Today we’ll talk about the reverse De La Riva guard, one of the most popular guards in all of grappling.

The reverse De La Riva (also known as the RDLR or spiral guard) is a guard that came to prominence around the early to mid-2000s, specifically used by BJJ greats Caio Terra and Rafa Mendes. It is similar to the De La Riva guard, where you use a leg hook to control your opponent’s movement. The main difference is that the leg configuration is reversed (the hook is from the inside position), hence the name.

It is a position used to threaten back takes, and at the same time counter common passing options like the knee cut. The reverse De La Riva guard is similar to the half guard in body position. Therefore many half guard specialists also use this guard.

Can Beginners Use The Reverse De La Riva Guard?

The reverse De La Riva guard is an excellent guard to learn once you have a solid understanding of the more fundamental guards like the closed, half, and collar and sleeve guard.

Similar to the standard De La Riva guard, or even deep half guard, the reverse De La Riva guard is a great option to add to your repertoire because it is a dynamic and offensive guard, but it may not be the best first option for beginner grapplers.

In this video, Ostap Manastyrski and Stephan Kesting demonstrate the basics of the reverse De La Riva guard. Notice that Ostap shows the technique starting from the standard De La Riva position.

A typical reaction of the top player is to remove the grip on their foot when inside the De La Riva guard. This makes the knee cut pass a good option and is perhaps the most common pass coming from this position. This is the best time to transition to the reverse De La Riva guard, as your other leg is in the perfect spot to wrap around the opponent’s passing leg.

It is critical to stay on a side when working on hook-based guards like the De La Riva and reverse De La Riva guard. It is difficult to follow your opponent if you stay flat on your back. Being flat on your back also leaves space between your legs and theirs. You can use your other leg to frame on the hip (if your opponent is standing up) or near the shoulder (if kneeling).

This gives you the ability to push away and create distance. If your opponent decides to put pressure on your guard, you can use your inside arm to block the knee. This creates another layer of defense and makes it difficult for the passer to smash you.

Next, Ostap teaches a basic transition from the reverse De La Riva back to the De La Riva guard. All you need to do is remove the hooking leg and frame it to your opponent’s outside hip. You can then use your other leg to create a hook on the left leg and grab the lead foot.

The last technique they demonstrate is a back take called the Kiss of the Dragon (reverse berimbolo). It starts by underhooking the opponent’s lead leg to initiate the spin under.

Next, you have to release your reverse De La Riva hook and invert under your opponent’s leg. Ensure that you hook the legs while keeping a good grip on the feet to prevent escape.

Once you secure the hooks, you can switch your grip from the feet to the hips. You can either climb up the body if your opponent chooses to stay low or drag them down using your hooks if they stand up. Both are handy options and are very effective.

It is vital that you keep your grips throughout and always maintain the proper angle so that your hooking leg is clamped tight. Make use of your posting leg and the arm holding the foot to create kuzushi. Always remember that you cannot sweep anyone without it.

Start by drilling the technique without any resistance. You can also switch from left to right so that you’ll get good on both sides. Once you become comfortable with the movement, you can tell your training partner to slowly add resistance as you drill.

Always seek feedback from your instructor as you do this. Work on your reverse De La Riva guard entries, sweeps, and transitions, and you’ll definitely see improvement in your game!

The reverse De La Riva guard is one of the many guards in Brazilian Jiu-Jitsu. Becoming a skilled guard player is crucial to becoming a solid grappler.

If you’d like to learn the essentials of the reverse De La Riva guard, we suggest that you watch the best in the world, like the aforementioned Caio Terra and Rafa Mendes. These two great champions are perhaps the best starting point for a student trying to learn the guard. You can also watch modern competitors such as Paulo and Joao Miyao, Michael and Tammi Musumeci, and Gianni Grippo.

Learn the secrets of a young rising star in Dante Leon. 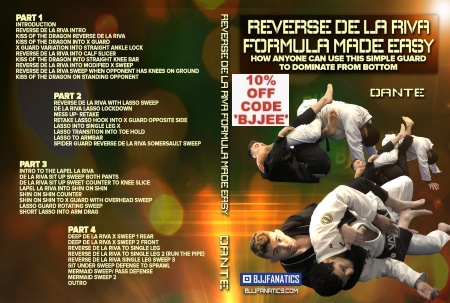