Everything You Need To Know About The Brabo Choke 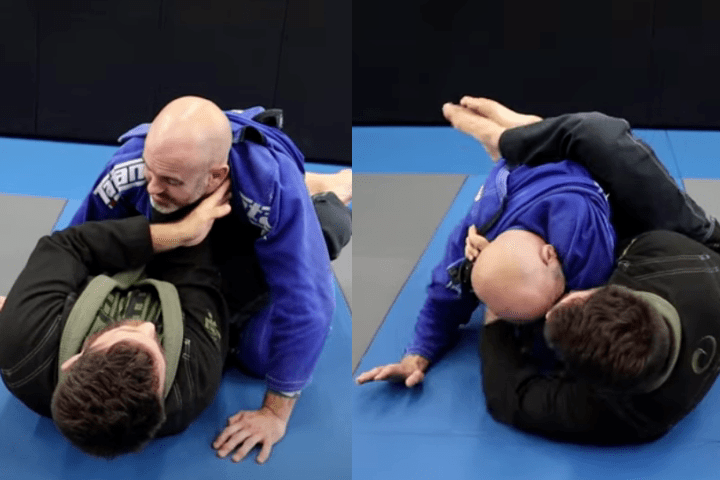 Brazilian Jiu-Jitsu has two main types: gi and no-gi. Technique-wise, submissions specific to gi BJJ require adjustments when applied in no-gi. This is primarily because of the availability of grips.

Take the D’Arce and the brabo choke as an example. In no-gi, the D’Arce can be performed directly as a variation of the arm triangle choke, but when adapted to gi, it becomes the brabo choke because the lapel is used to choke the opponent.

In this article, we’ll talk about a powerful submission called the brabo choke. This is a crushing technique that you may add to your offensive repertoire.

What Is The Brabo Choke?

The brabo choke is a BJJ submission that aims to trap the opponent’s arm as the top player applies pressure by dropping their chest on the trapped arm. Part of the technique involves gripping the lapel as you go behind the back all the way beside the opponent’s neck.

The finishing mechanics requires squeezing the side of the neck. This disrupts blood flow going to the head, thereby forcing the tap. It was originally developed for top players, as the choke can be applied either from half guard or side control, but it has been in constant development ever since.

Leo, the founder of Checkmat Academy (who also competed under Alliance Jiu-Jitsu Team previously), saw one of his white belt students get into a similar position by instinct and started working on the position since then. The technique became a success as Leo consistently applied the submission in tournaments.

His dynamic top position style, emphasizing the knee-cut guard passing, worked relatively well with the brabo choke. He submitted most of his opponents at the 2004 World Cup and Pan American Championship.

Because of Leo’s success with the choke, many competitors have adapted the submission as part of their arsenal. Brabo in Portuguese means things such as angry, tough, or aggressive. Leo’s email handle when he started doing the move was “leobrabo”, this is the main inspiration for the name of the choke as his close friend Kit Pelligro started calling the submission brabo choke.

How To Perform The Brabo Choke

When passing the half guard, the typical reaction of an opponent is to get the underhook. If this happens (assuming that you are passing on their right side), open their bottom lapel with your right hand to counter their underhook, as it will drive the opponent flat on the mat.

Continue grabbing their lapel with your right hand and transfer it all the way from the opponent’s back with your left hand positioned below their head. This will allow you to easily drive the opponent flat by pulling because of the tight control the lapel offers.

Transfer the lapel grip back to your right hand and keep it beside the opponent’s neck. It will serve as the choking material later on. There are various ways to finish the choke. One is to grab the opponent’s lapel from behind with your left hand as you drop your forearm on the exposed side of their next from the top.

The other is by grabbing their shoulder instead of the lapel. The third option opens if the opponent defends by framing with their top arm. When this happens, pull their tricep to straighten their arm across your chest while driving forward to apply pressure as you grab their back with your left arm by going beside the bottom side of their neck.

The brabo choke can also be performed while in the closed guard. This is the result of years of development and refinement by many athletes who’ve used the technique. Chewjitsu shows that the brabo grip in the closed guard offers a powerful grip that can control the opponent’s posture.

To set up the choke, maintain the lapel grip with your right hand and turn to your right side. Do a side crunch as you attack the right shoulder with your left hand. Because of the threat on the opponent’s right shoulder, they will most likely bring their hands to defend by pushing your left arm.

Use your left hand to apply a cross grip and pull their hand across as you pull your chest in to prevent the opponent from bringing their elbow back up. From here, perform a high guard by placing your leg beside their shoulder as you cup the head, similar to a collar tie. Use your left hand to trap the arm while pulling your chest in as you straighten your wrist to finish the choke.

It is crucial to understand how to effectively apply the gi grips in BJJ. Doing so will help you achieve better control, allowing you to move in for the submission. It is also essential to pay attention to the details that differentiate submissions in gi and no-gi. Remember that slight variations of a move will require you to change your gripping mechanics. Always be mindful of this as you study the brabo choke and its variants. 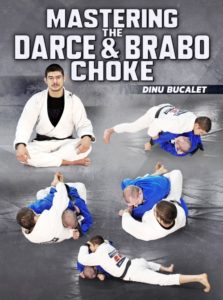