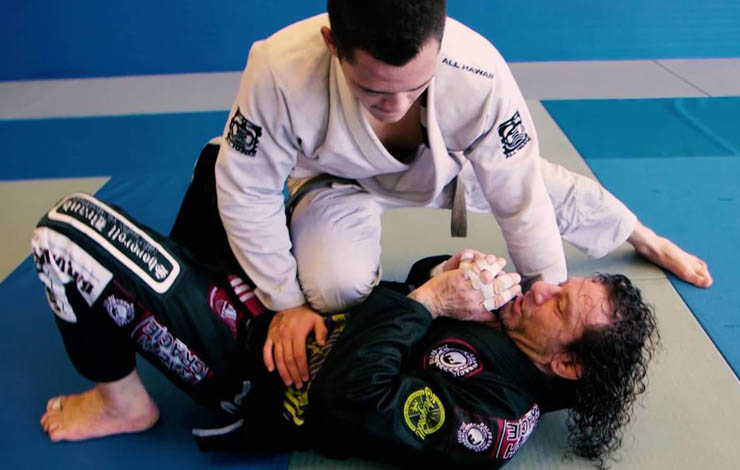 Do you struggle when your training partners and opponents hit you with the Knee On Belly position? When they’re having so much fun with it? The Knee On Belly doesn’t just hurt the body, it hurts the soul too… The only solution to this is to arm yourself with great escapes and reversals! And what would you know: Keenan Cornelius has one such technique in store for you.

THERE’S NOTHING „UNREALISTIC“ ABOUT BJJ

When you read up below on how this technique is done, and when you watch Keenan demonstrating it on video, it’s very important that you don’t approach it from a mindset that says: „Oh, well, this could never be done in an actual roll.“

Sure, some moves are really low percentage (like ‘flying’ techniques, the Twister, etc.), but they aren’t impossible. You just need to be in the right situation, to have the right timing and skill – and BAM, they’re yours! So yes, your BJJ game should be based on „reliable“ setups and techniques, but don’t disregard the lower percentage ones either.
With that said, Keenan’s Knee On Belly reversal is in no way a low percentage move. It looks fancy, and it is, but it’s simple to do!

Just give it a shot! Don’t let it join all those moves you’ve watched on Youtube, only to have never tried them. You’ll see just how ridiculously effective – and surprising for your training partners – it is.

If you want to escape any sort of a position properly in BJJ, then the first thing you have to do is make sure that you minimize the chances of getting submitted in the process. Keenan emphasizes that you mustn’t extend your arms in the Knee On Belly position so as to push the training partner away. Instead, keep them low by pushing against the partner’s knee.
That’s the starting position. What you’re going to do now is that you’ll remove one hand off of their knee (the one that’s further away from them) and use it to push their posting leg.

What you’ll notice is that, in order to do this, you’ll have to twist into your training partner. That’s exactly the point; as Keenan explains, this will result in you removing the pressure off of your solar plexus and transferring it onto your hip. Which isn’t a bad position at all!
During this process, Keenan points out that you should shift your legs to the partner’s inside position (behind, not in front).

Now comes the funky part. With the arm that pushed the partner’s posting leg, you will reach inside and over your knee – so that your knee and arm end up in-between the opponent’s legs.
From here, you can set up your reversal. Keenan explains that you can either go beneath them, using your leg to hook their leg and sort of „kick“ them over you. But if they have good balance, you will not be able to do this; so, you should slide your other arm’s elbow beneath your ribcage. Then, use your legs to get up to your shoulder – and then just sort of forward roll. From there, you can let go of your knee and do a technical standup to get into an advantageous position.

Don’t forget to keep your hook on the inside of their leg in the process, however. For more of Keenan’s details on how to execute this beautiful escape and reversal, watch the video below: