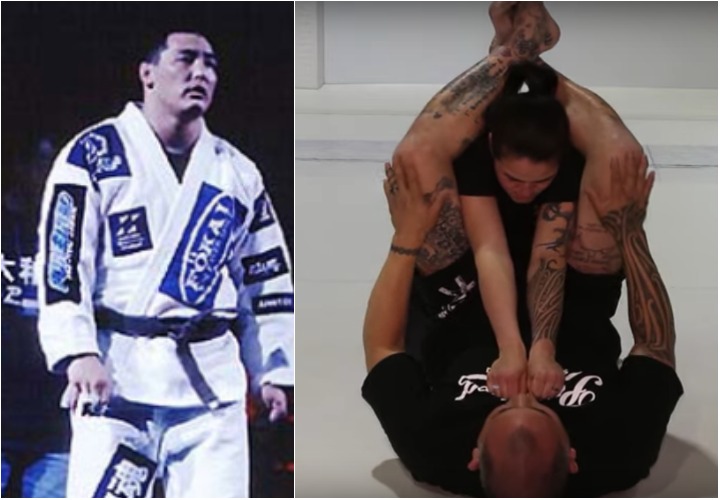 MMA legend and old school BJJ black belt Enson Inoue has been retired from MMA since 2004 (he had a short comeback fight in 2010), but he has started training Jiu-Jitsu again in 2016 after taking a 10 year break from the sport.

However before he was an MMA legend he was just another person attending a jiu-jitsu class at the Hawaii college.

At the time Relson Gracie held a non credits course at the college. Relson Gracie is the 2nd oldest son of Helio Gracie and considered to be the Shark of the original Gracie brother clan.

First time Inoue saw jiu jitsu was in one of those Gracie in action videos. Inoue recently detailed his first exposure to bjj:

“I remember watching and saying wow this wall these guys are kicking some a*s … I was like kind of like wow this looks like a good art but maybe that guy was just a better fighter. Then the last fight on the video was Rickson… ”

“Don’t tell me this guy is gonna beat the black guy up” Inoue added ” Right there I was wow, I gotto check this art out. I asked the guy where is the classes he said non credit course, gracie jiu jitsu was actually a non credit course at the university of Hawaii ”

As the story goes Inoue went ahead and signed up. However after watching the first instructional Inoue was not convinced:
“you’ve been over and you get your head under his arm and like oh my god this is horrible!”

This prompted him to ask for sparring after the students left the class:
“Can I spar with someone to feel the technique? ”

“I’m trying to figure out if this is a good art. I never did wrestling but I can grappler. ”
Promptly they lead him to a 130lbs black belt Romero. Inoue was initially scared he would hurt the black belt
“because I think they understand that you know a lot of the people off the streets don’t understand joint locks so a lot of times we won’t tap thinking there’s no danger so he opted to just choke me out.”

Romero promptly repeatedly got to Inoue’s back and choked him out. This had some significant effect on INoue:
“I promptly stopped training teakwondo I just did very part-time Muay Thai and I started doing I kept doing my Wing Chun but 99% of my energy was in jiu-jitsu and I was 24 hours jiu jitsu after that”

Enson Inoue recently showed an interesting set up to armbar from guard. Inoue holds a famous armbar win over none other than Randy couture: