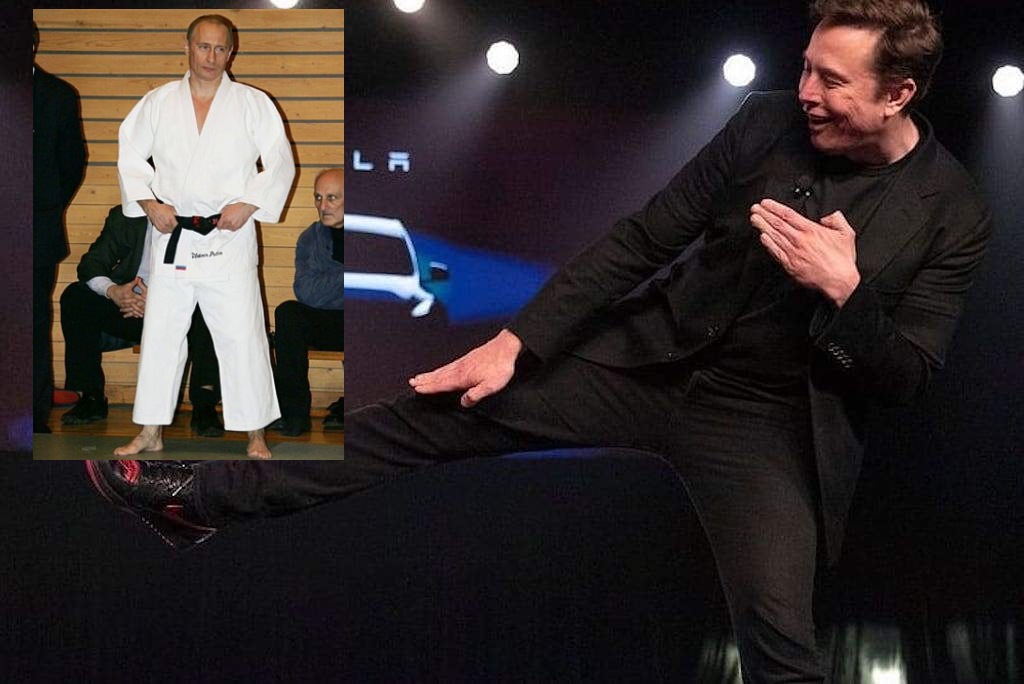 The Billionaire founder of Tesla and SpaceX challenged the Russian president on Twitter to a one-on-one fight – the winner is Ukraine.

“I am challenging Vladimir Putin to a one-on-one fight,” the billionaire wrote on Twitter, using a Russian letter to write Putin’s name.

In a subsequent tweet, Musk then posted the entire message in Russian.

Musk has taken an active role in the ongoing war between Ukraine and Russia, both on his Twitter profile and through his companies.

Musk has openly made fun of Russian officials on social networks, and even recently activated Starlink terminals in Ukraine .

Elon Musk has trained Brazilian Jiu Jitsu. He trained BJJ in Palo Alto, California. His kids have been training since they were 6 years old. Also when Musk was a child, he trained in kyokushin karate, taekwondo, and judo.

Chechen leader Kadyrov, who is a big sponsor of combat sports through his Akhmat Fighting academy, has posted on his Telegram account on Tuesday, advising “Elona” Musk not to wrestle with the Russian leader, who may be 19 years older but has extensive martial arts experience, being a black belt in Judo and Master in Sambo.

“The weight categories are too different,” Kadyrov said, and while Musk is “a businessman and a twitter blogger,” Putin is a “world politician, strategist and scourge of the West and the USA.”

“Vladimir Vladimirovich will look unsportsmanlike when he beats a weaker opponent,” Kadyrov added, offering Musk to train at three famous Chechen venues under renowned champions, in order to transform “the gentle Elona into the brutal Elon.”

Musk posted a screenshot of Kadyrov’s message and a machine translation, along with a reply.

Thank you for the offer, but such excellent training would give me too much of an advantage,” he said. “If he is afraid to fight, I will agree to use only my left hand and I am not even left-handed.” He signed it “Elona,” and even changed his Twitter handle to reflect the new name.

Putin famously doesn’t follow any social media himself, and the Kremlin has not dignified Musk’s challenge with an official response. That hasn’t stopped Kadyrov, or the head of Roscosmos Dmitry Rogozin before him, to engage with the SpaceX magnate. Rogozin tweeted at Musk on Monday, in Russian, quoting verses by the famous poet Alexander Pushkin about a clever peasant outwitting a demon.

“I see you are a tough negotiator! Ok, you can have 10% more pay per view money,” Musk shot back, accompanied by a picture of Putin riding a bear and himself wielding a flamethrower, captioned “Choose your fighter.”

“He can even bring his bear,” Musk added, along with a quote – again, in Russian – from “Idiot” by Fyodor Dostoevsky.The government in Kiev has previously sought Musk’s aid in the conflict with Russia, to which he responded by sending a shipment of Starlink satellites. However, he refused to block Russian sites on the Starlink network, saying he would only do so “at gunpoint” because he was a free speech absolutist.

Referring to that in another message on Tuesday, Kadyrov said he “sincerely appreciated” people with “unshakable will” like Musk, all joking aside.

“Respect for the character and the absence of double standards,” said the Chechen leader, adding “I still hope you were joking about my president.”