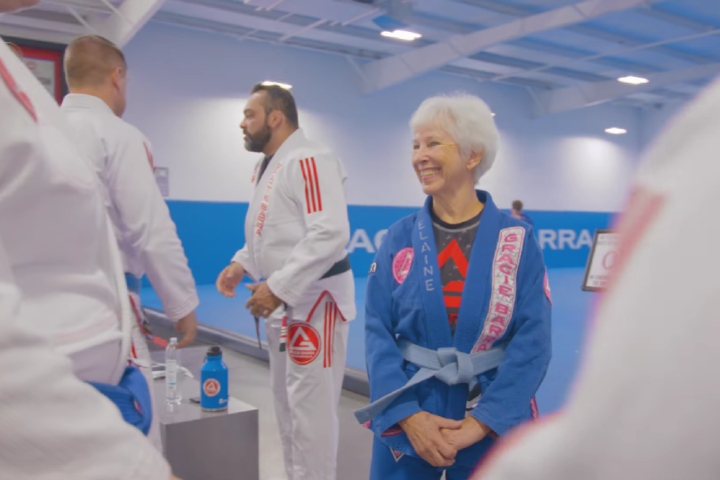 Elaine Wynn Beiersdoerfer is a 73 year-old woman who trains BJJ 3 times per week at Gracie Barra Pelham (Birmingham, Alabama) – and is a competitive blue belt.
She started training when she was 69. In an interview for “Mat Made“, Elaine remembered back to how her introduction to Jiu-Jitsu was through judo:

I actually took a judo course back when I was like 20, it was a 6-week course. And I loved it, but when I came back to Birmingham – they weren’t teaching it.
Then, at 69, I found out that [there’s a judo academy near me] and I just came up and asked: “Can I come to your judo class?”

And when I started going there, I was the only girl. Teenage boys on one side, guys that look like they’re in the NFL on the other side… And I kept at it for quite a while, and he [the coach] kept saying: “Don’t throw her, don’t throw her!”
He then finally said: “Okay, you can throw her, but carefully.”

And in the end, he finally said: “Why don’t you try Jiu-Jitsu? It’s on the next mat.” He taught both [judo and BJJ]. So I moved to the Jiu-Jitsu match – and I loved the fighting.

Elaine keeps training not just because she enjoys Jiu-Jitsu, but also because of the health benefits:

The benefits at my age are really good. Because, the bone density – especially for someone my size – is a really big deal. And I have osteoporosis, but the last time the doctors x-rayed my shoulder, they were like: “Man, your bones look great!”
The hips are a lot stronger, plus building muscle at my age is hard.

She emphasizes that it’s important to keep learning, especially at an older age. And BJJ gives her an opportunity to do so every week:

You know, you have to have a certain mindset to do Jiu-Jitsu. You have to like physical contact in that fighting part… And I don’t think that the Lord expects us to just coast through the last years of our lives – you need to get up and do something.
Find something fun to do, something new to learn. I think that’s really important to do and at my age, in my 70s, learning something new week… How many people get to do that?

I’ve got 3 days per week, sometimes 4, when I’m learning something new. And I’m not only learning it in my head, but I’m also learning it physically.