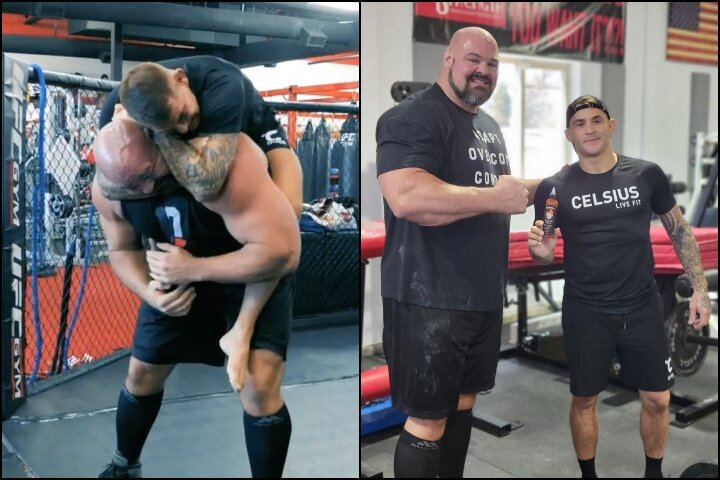 Some time ago, a video surfaced showing a roll between Dustin Poirier – UFC lightweight athlete and BJJ black belt – and Brian Shaw, who is a 4x winner of the World’s Strongest Man title.
Shaw weighs around 400 lbs and is 6’8 tall… So it was indeed a fun roll to watch!

Check it out on the video below. Poirier displayed the effectiveness of Jiu-Jitsu in full light:

However, during a recent interview for Yahoo! Sports, Poirier revealed one more tidbit behind the story:

That’s not the full video, he taps me out later on by just putting his weight on top of me.

He’s one of the nicest guys I’ve ever met but a huge individual. He’s a giant. It was fun, he has no grappling experience, but just his strength and size just to get my legs around him to take his back, to hang onto him, he’s such a huge human being.
It was a good experience.

Even though Poirier is a black belt, he was still crushed by Khabib Nurmagomedov. In his own words:

He is just so advanced. And his feet are like hands… His foot sweeps and the way he braces you down is… It’s just good. Yeah, he’s good. So good.
And nothing feels forced. It’s like he’s gentle, almost.