Drowning On Dry Land: Or How I Learned To Stop Worrying And Love Jiu-Jitsu 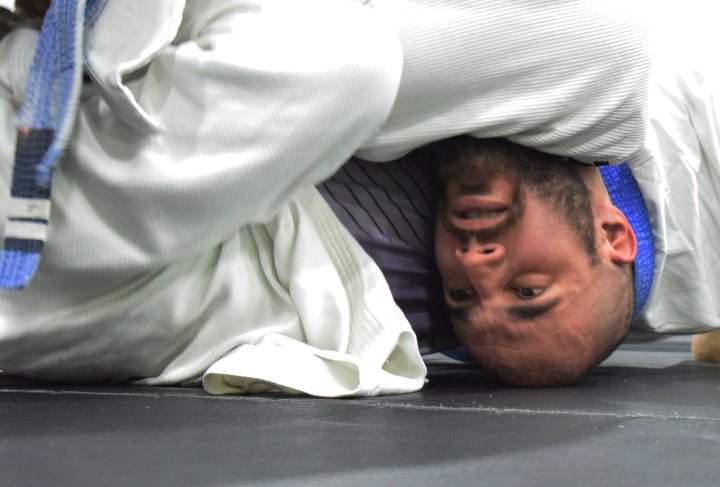 “Where there’s discomfort, there’s fear. In these very tough positions, you’re in a little piece of hell. And through this daily suffering, you learn to survive in these situations. You have to find comfort in the uncomfortable situations. You have to be able to live your worst nightmare. Jiu-Jitsu puts you completely in the moment where you must have complete focus on finding a solution to the problem. This trains the mind to build that focus, to increase your awareness, your capacity to solve problems. Sometimes, you don’t have to win. You cannot win. But that has nothing to do with losing.” – Rickson Gracie

There is no air in my lungs. My chest bucks and swells on a phantom breath. My heart beats against the prison walls of my ribcage as my body stiffens with a panic I’ve not felt before; a pleading, desperate voice, bartering by any means necessary for the release of this pressure that now seeks to crush us. My legs kick, and meet nothing. My arms search violently for a life-line, more nothing. Then the helplessness takes me, the all too familiar realisation of my own impotence; and through the blackening soft-focus I see myself as if from above, in all my disappointing, flaccid glory. It is in this moment that I realise a single, shocking desire. I want to live. More than ever before, more than I would’ve thought possible; and so, I tap. And, in submission, the world comes rushing back to me.

Unlike most people, I didn’t come to Brazilian Jiu-Jitsu for reasons of self-defence. At the time, I didn’t see that I had a self worth defending; and certainly knew the statistics well enough to know that, as a man aged under 45, the greatest risk posed to my life was probably myself. For the past few years, or perhaps longer, I have struggled with depression. It’s possible its been stalking me from the corners of my psyche my entire life. Though my thirty years on this earth have been largely devoid of any real hardship or traumatic experience; there has always been a low-level hum of dread present in the recesses of my mind. A nagging self-doubt, a feeling of worthlessness. Of course, there are good days, and bad days; and sometimes the good even outnumber the bad. But all the while there’s the gentle throbbing truth in the background: ‘you will never be good enough’.

In more recent years this problem only exacerbated. Despite being in a truly positive place in my personal life, and finally finding something resembling stability in my career; the background noise transmuted into a full blown opera. From my front row seat I watched like a morbid spectator to a car-crash, as my emotions spun completely out of control; lurching erratically from anxiety to anger to resentment to full on hysteria at a moment’s notice and for seemingly no good reason, sometimes all before breakfast. Like a swan’s legs my mind endlessly rotated through this vicious spectrum; though the water above remained blank and unmoving, the cold, still, numbness broken only by the occasional ripple (sp)lashing out against those who didn’t deserve it. As my internal world started to affect the external world, and those around me; I decided something had to be done.

I tried many things to try and quell and quiet the turmoil within: meditation, medication, self-medication, therapy, running, yoga, breathing exercises, cold-immersion therapy, even a sensory deprivation tank. Many of them helped in their own way but yet, everywhere I turned, there I was. In my own head. Wondering whether this was simply my life now, perhaps this was all there was ever going to be. Then, in a succession too quick to be a coincidence, a number of people I trust and respect mentioned the three unassuming letters that would spell my salvation: B. J. J.

Brazilian Jiu-Jitsu is a grappling-based martial art of similar origins to Judo. Initially from Japan and used by the samurai; it was exported by Japanese Jiu-Jitsu masters immigrating to other continents in the last days of the 19th century. Most notably, Mitsuyo Maeda, who settled in Brazil and taught the art to locals, including one Carlos Gracie. Over the years Carlos and the Gracie family refined their art through brutal no-rules fights and the art became more focused on submission ground fighting; promoting concepts that allowed a smaller, weaker person to successfully defend against a bigger, stronger assailant by using leverage and proper technique.

One’s first experiences on the mat are unlike any other. Being in the grip of a seasoned grappler is like drowning on dry land; where there is no shore in sight, and not even the slightest hope of treading water. To realise the true depths of your vulnerability as you are repeatedly put into increasingly ingenious positions of discomfort is humbling beyond belief. In my opinion, nothing else even comes close to recruiting and exposing more emotions. Panic, claustrophobia, anger, disappointment, fear, anxiety, ego; all these rise to the surface, to be dealt with daily when ‘rolling’ Jiu-Jitsu.

However, as you learn and apply the art’s concepts you learn to be calm under pressure. You learn to bide your time, to pre-empt your opponent, to use their strength against them; to remove your emotions from your decision making and rely purely on the techniques to keep you safe. As you become more comfortable dealing with your fears, you change. You begin to transfer this outlook into your everyday life. You become a calmer, more rational, dare I say ‘better’, person; more capable of dealing with your boss, your employees, your partner, family, friends, strangers and, ultimately, yourself. Respect (for yourself and others), humility, trust, confidence, empathy – all of these are traits valued and actively cultivated in the Jiu-Jitsu community; as are consistency, resilience in the face of setbacks, and determination. Character traits we should all aspire to nurture in our daily lives; particularly those of us struggling with our mental health.

The intensity of the art as a form of exercise, and the barrier-breaking physical intimacy of this ‘extreme cuddling’ has been scientifically shown to release neurochemicals and endorphins in the brain; as well as powerful hormones such as oxytocin & testosterone, but it’s not purely these biological effects that are responsible for the powerful feelings of elation and connection engaging in something as physically challenging as BJJ can provide. For every ‘move’ in BJJ there is an endless stream of counter moves, and counters to those counter moves in turn. It’s an endless game of chess played with both mind and body; demanding you sharpen your intellect and problem solving abilities. It is the ultimate moving meditation. There is simply no way to survive a tough sparring session with a skilled partner without being completely present in the moment. It is psychologically impossible to devote mental resources to worrying about the rent, work, or any of your personal problems; there’s just no room for those thoughts, and thus they diminish in power, exposed for being nothing more than that: thoughts.

As the American neuroscientist and philosophical writer (and BJJ practitioner) Sam Harris puts it ‘Training in BJJ offers a powerful lens through which to examine some primary human concerns—truth v. delusion, self knowledge, ethics, and overcoming fear’. The opponent offers us the opportunity to examine ourselves. Ultimately the lesson is not to compare ourselves (whether favourably or not) to who other people are today, but to who we were yesterday.

It’s been a year now since I began training in BJJ, and in that time I have seen the most drastic and lasting improvement to my mental health and overall wellbeing. What initially began as a passing curiosity has blossomed into a full-blown love affair, reminding me that growth and improvement is still possible and providing me with framework to do so. The stress I put myself under on the mat has left me, if not impervious to, then at least inoculated against, the stresses of day to day existence. It has provided me with an invaluable perspective on the perceived importance and immediacy of my mental health issues. There are undoubtably very real problems, both in the world at large and in our own personal worlds, but there are also solutions. It’s all simply a matter of knowing the correct counter move; of pre-empting where the next attack might come from; of understanding the reactive, fight or flight, nature of our minds and evolving this towards a more ‘response-able’ approach. Above all, Jiu-Jitsu has taught me that you can’t ever fully avoid the chaos, but you can weather it, and come out the other side galvanised by the pressure; a stronger and more fully realised version of yourself. Perhaps even enjoying the scramble along the way.