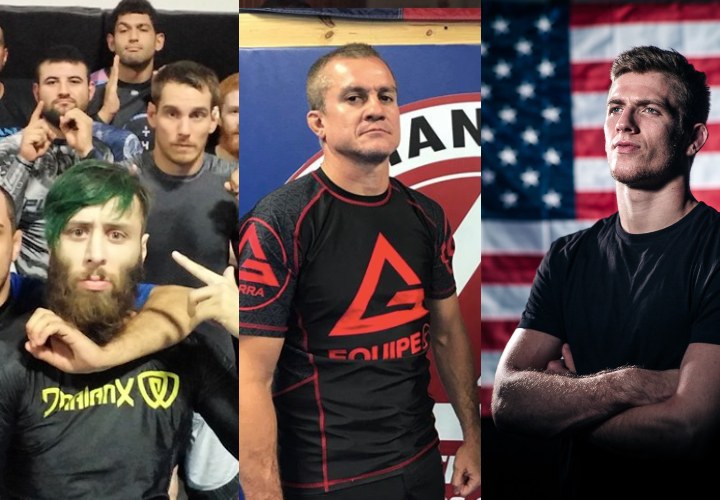 Vinicius „Draculino“ Magalhães is a fifth-degree black belt under the legendary founder of Gracie Barra, Carlos Gracie Jr.
A part of the „golden generation“ of BJJ, he has trained with other legends such as Roberto Gordo, Tinguinha, Soneca, Soca and many others. He was also the first person to open a Gracie Barra academy outside of Rio de Janeiro; and is known today as a world-class coach, responsible for developing world-class athletes such as Romulo Barral and Samuel Braga.

Over the past few years, certain members of the Jiu-Jitsu community have wanted to re-invent the wheel and start to differentiate themselves from the rest of Jiu-Jitsu by renaming Jiu-Jitsu to their own style: 10th planet Jiu-Jitsu of Eddie Bravo comes to mind:

Is 10th Planet BJJ Considered a Separate Branch of BJJ?

Keenan Cornelius has renamed his style “American Jiu-Jitsu”, although technically Jake Shields had used that term before him, and also was critical of Helio and Rickson Gracie:

Draculino shared his thoughts on the subject in a heated social media post which was applauded by many BJJ champions (Roger Gracie, Romulo Barral, Gordo etc..):

“I’ve been holding my tongue for quite a while but people have to stop buying into the BULLSH**T that certain professors, athletes and segments of the Jiu-Jitsu and Grappling media are spreading into our community. In order to implement their own agenda and to capitalize on this, they are:

1- dividing: they say that “real” Jiu-Jitsu is exclusively what they teach. Some say self defense only classes are the real thing. Some others say competition is what counts and self defense is dead and not necessary because a law suit solves everything. Others that NOGI is the only “realistic” way and the Gis are pajamas. Others that NoGI is not JJ and that in the street people wear clothes. Others say that sub only is what needs to be taught because if someone doesn’t tap, there wasn’t a victory.. and etc, etc.

2- Branding: now there is this “ Brazilian vs American Jiu-Jitsu” trend.

Well, there is no American, Brazilian, Japanese, Russian, Planet or any other name. THERE IS ONLY JIU JITSU! If this people don’t know, until the art exploded in the US, BRAZIL, Europe, Japan and other places the art was called Ju Jitsu or Jiu-Jitsu. It was in HERE, im the US, that people started to brand it that way. Back in BRAZIL, we never said we practice JIU-JITSU BRASILEIRO. It was Jiu-Jitsu. Period. And now they say the American version is the best since it incorporated wrestling, Judo and got more technical. WRONG! Wrestling was blended into JJ thanks to ROLLS GRACIE, who competed extensively in the sport and actually brought Bob Anderson, a great wrestler, to learn more ( but Bob never got involved or taught JJ in America. The Gracies did). Judo and JJ are pretty much the same art with different rules and philosophies and since the 50’s, several high level athletes or fighters from each discipline cross train and compete in both scenarios like Kimura, Royler Gracie, Flavio Canto, Amauri Bitteti, Megaton, Yuki Nakai and several others. This is not something that happened in America only.

they say that what have been practiced, taught and proved to be a very effective martial art and sport is obsolete. They say that the teaching methods that made them and the sport so big are wrong. They say that respect and reverence to those who paved the way is BS. That having their pictures on the wall is making it a cult. That bowing to them is ridiculous. Well, what they don’t know or forget is that if they are making money, have fame and do what they love IS BECAUSE OF THE HEROIC ACTIONS OF THIS “ OLD GUYS WITH PICTURES ON THE WALL”. And the worst is that most of this disrespectful fools don’t have the balls to back it of. They don’t have the same samurai spirit of the “old men on the walls” who literally fought with ANYONE, in any arena, in any rule, in the street, with no weight class. This idiots call brave man crazy, animals or has beens.

Well my rant is over. But KNOW that there is only ONE Jiu-Jitsu. And this art is vast, huge and improves everyday ( in Brazil, America, Japan, Europe, Australia, the Middle East) Embrace the new, but NEVER forget or disrespect our roots. #unity #respectyourroots #onejiujitsu“”