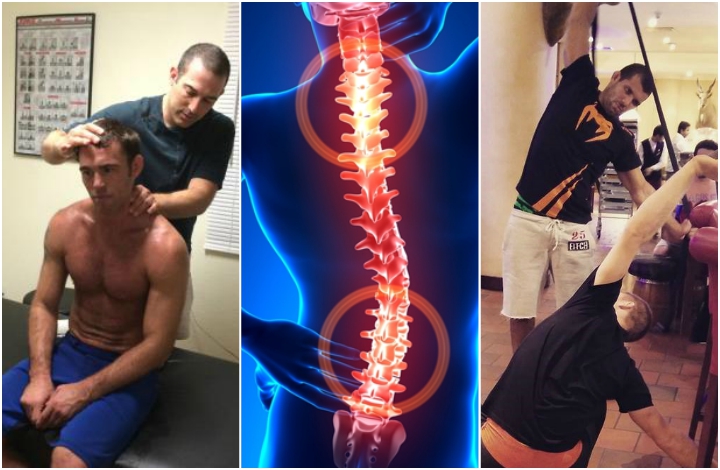 Do you have an issue with your back? Are you in pain? Disc herniations are much more common than previously thought. Further, disc herniation may be asymptomatic. They may cause mild to moderate or confusing symptoms but they can also lead to serious, devastating and permanent injury. Prior to 1985 they were believed to occur in only one person in a million per year. Could grappling sports have seriously increased this number?

A much more likely explanation is that the lack of diagnostic technology left many of these cases undiagnosed or misdiagnosed. Back disorders are sadly frequent in modern societies and in fact, they were probably somewhat frequent through history but the lack of MRI technology made the diagnosis substantially harder.

What are some of modifiable risk factors for development of this condition? How do these differ for non-grappling population and those involved with grappling arts?

Rickson Gracie at age 57 has no less than 8 herniated discs. Some of you might know he’s had these injuries but (according to his son, Kron) what might surprise you is that he even fought in this condition. Rickson’s doctor even went so far to recommend Rickson not walk.
True Veteran of Brazilian jiu-jitsu, Ricardo Liborio also managed to injure his back severely. The founder of American Top Team has 7 herniated discs. Joe Rogan mentioned at a certain point during his podcast that Mr Liborio cannot move anymore without pain. Let it be said: he still rolls. Rener Gracie also suffered from a herniated disc injury when he was just 19 years old. Rodolfo Vieira spent a large part of last year off the mats as a result of a herniated disc injury.

Generally speaking a number of studies including the one done by Elfering et al. found that individuals with a high physical fitness had a lower chance of developing disc degeneration. Certain studies going as far as 1970 found that those patients with high height and weight (aka bigger body mass index) are more prone to develop lumber disc herniation.

The term herniation means that the material at the center of the disc has squeezed out of its normal space. This condition mainly affects people between ages 30 and 40. As a layman I considered the link between obesity and low back pain but that seems scientifically controversial. Modern studies find there’s a lack of clear relationship between body mass index (BMI) and lumbar disc herniation. In fact some studies found neither gender nor body mass have influence on development of this condition. However height in standing posture is found as a risk factor again and again. Alashaw’s study from 2011 found the only significant risk factor to be height. Their study estimated attributable risk to be as high as 60% for taller people. Patients with increased tall statures seem to be far more prone to lumbar intervertebral disc herniation as evidenced by a number of other studies.

How far does the risk go for tall people? Well 60% of participants in a study could be eliminated if they don’t have the height. Concerning the weight, while higher BMI and higher weight aren’t directly related to the probability of herniating disc- men who are very overweight are up to 3 times more likely to get a slipped disc.

What happens when we throw in Brazilian jiu-jitsu (and other grappling arts) in the equation?

One Brazilian study in 2015 found that out of 72 participants, 36 competitive and 36 recreational, chronic back pain was present in close to 81% of athletes (Reis, et al.). While this is hardly a shining endorsement it’s important to note that competitive practitioners reported significantly higher levels of acute chronic back pain. Using the Quebec Back Pain Disability scale they found that the average recreational group suffered 4 points less on average (12). You can score yourself if you click here. When you read a study like this it’s hard to take articles that complain about the softening of jiu-jitsu seriously. Debilitating severe injuries and chronic pain are a reality we must not discount when we choose to participate in a sport like this. While kinanthropometric characteristics of elite bjj athletes are rare in scientific literature (Vidal Andreato et al., 2011) there’s also morphological differences to consider in fighters with different combat styles. Baez study found that while we can’t predict which style someone will assume based on their age, body weight and BMI – we can assume based on height. Guard fighting style was significantly more prominent in those classified as higher height as well as height weight ratio. This research merely establishes the connection between tall and lanky build aka ectomorph and guard fighting. It has yet to be researched just why this style appeals so much more prominently to people of this particular build. But if this build is most prone to injuries (as the scientific evidence suggests) it’s no wonder they don’t hesitate to guard play because, as you’ll see below – being the receptacle for a takedown is the number one leading cause of catastrophic injuries in grappling sports.

Many comparative studies stress how many injuries occur and/or quantify them. And while they mostly agree that grappling arts are hard on joints they don’t spend as much time with the hardest injuries and situations that resulted in them.

One entry into The American Journal of Sports Medicine titled “Catastrophic Injuries in wrestling” followed and reviewed 35 incidents occurring from 1981 to 1999. They note that many of the severe incidents (including herniated disc) happened in match competitions (80%) and also that there’s a trend toward more injuries in the low and middle weight men’s classes. The position most frequently associated with severe injury was the defensive position during the takedown maneuver (74%). Similarly Japanese research titled “Catastrophic head and neck injuries in judo” found that neck injuries were associated with having more experience and executing offensive maneuvers whereas head injuries were mostly associated with age under 20 and with being thrown. This coincides with one earlier BJJ research result claiming that injuries are much more frequent on brown and black belt levels. Judo section of Epidemiology of injury in Olympic sports suggest that most Judo injuries result from tachiwaza/standing techniques (roughly 73%) seoi nage and tai otoshi being particularly problematic. It is also worth mentioning that if you have issues with C5-C6 level disc you should stay away from uchi mata because there’s an entire case study around it detailing unilateral C5C6 facet fracture dislocation caused by it (Delattre et al., 2005).

The same book details incidence of Wrestler injuries, this time specifying that regions mostly injured are the head/spine/trunk even going so far as to classify 50% of all injuries to it. Unlike Judo and BJJ the majority of wrestling injuries occur in practice at all levels. Much like with Judo, Pasque and Hewett (2000) found that the majority of catastrophic injuries occurred with the player in the defensive takedown position.

Here are some BJJ details worth paying attention to

When playing inverted guard it’s very handy to remember to keep yourself off balance. Always lean more on one shoulder or the other – that way you can mitigate some damage an opponent may cause by sprawling on top of your legs.
Avoid staying in inverted guard for prolonged periods. Advanced players invert momentarily to attack or defend and then immediately return to some of more traditional positioning.

It’s also worth noting that from reverse de la riva, your non hooking leg should be on the opponent’s hip until you’re at the point where they cannot drop their weight on you. Always manage distance!

Whenever possible, spin on your shoulders rather than the neck.

Injuries are a part of most sports. We must learn how to deal and ultimately live with them but it certainly doesn’t hurt to take some preemptive measures:

Eating well is essential because it has direct impact on your strength as well as other physiological parameters as well as body tissue.

-Consider foam rolling. Many researches point to beneficial effects of foam rolling.
-Yoga might provide you additional flexibility and strengthen your back
-Analyze your weak spots and work on compensation
-Wrap body parts that start hurting preemptively
-Roll relaxed. Nobody wants to spend an entire 5 minute session yanking at your sleeve – and tension and rigidity significantly increases the odds of something getting sprained or twisted. Relax when you’re not performing a technique. Think about your escapes.

Some people are like a bull in a china shop – If you feel like china maybe you shouldn’t actively seek out a person likely to stomp on you.

Check out our article: Long Term Effects of A Lifetime of Grappling Competition Training.