Do We Really Need a Belts? Positives & Negatives of the BJJ Belt System 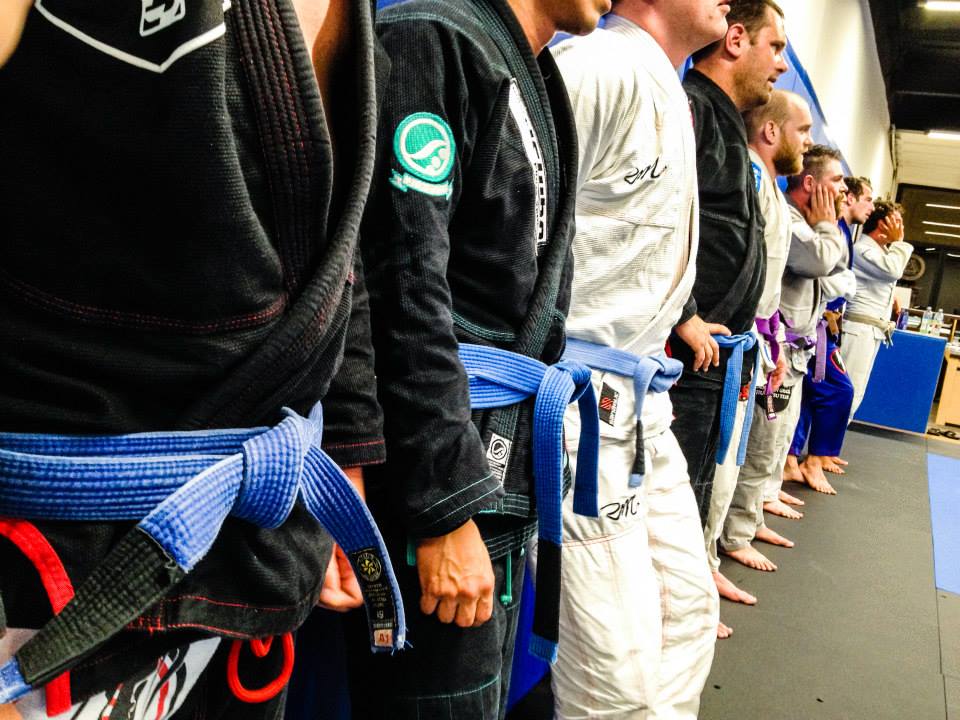 We’ve all been there, whether we want to admit it or not. That moment when your professor has torn a few strips of medical tape and stuck them on the wall after calling “line up.” Or, for some academies, the annual “promotions” class.

Some of the happiest moments in a BJJ player’s life comes in that single moment, just for a millisecond, when your professor calls your name after giving the “promotion” speech.

But, WHAT IF I TOLD YOU….your belt color should be the very last concern you ever have in Jiu-Jitsu?? And that the progression of “belt colors” could actually have a negative effect on your life, training and your Jiu-Jitsu. What then?

Why would I say that? Well, let me explain.

The idea of “working towards a goal” is, generally, a positive one and this is also the case with BJJ. But, also like BJJ, the difference is in the subtle details.

When a Jiu-Jitsu player receives their shiny new belt (color not necessarily relevant) two things come from that event:

1) A sense of accomplishment

Both of these can be good, but they both have side-effects that can have a negative end result on your jiu-jitsu. Let’s take a look at the first event:

Sense of accomplishment: The gratification we experience when being promoted is a fantastic feeling! You have worked long and hard. Applied yourself day after day towards improving your skill in the gentle art. You deserve it and your professor thinks so too! Unfortunately, this sense of accomplishment can often (not always, but often) devolve into a false sense of achievement. Its not that you haven’t achieved anything, you have, but beware of the “false arrogance” that can so easily creep in along with our pride in accomplishing a tough feat.

Right now, many of you are saying “Whoa now, easy buddy…who you calling arrogant?” Don’t worry, I am sure that this applies to very few of us in the BJJ world. In fact, most of the people I know of bring a tremendous sense of humility (to be discussed shortly) with them when promoted to the next belt level. But, I have seen it with my own eyes: those persons who unintentionally develop a sense of arrogance when promoted.

Both excessive pride (arrogance) and excessive humility can be problematic to your own advancement.

Excessive humility can lead to an exaggerated sense of importance to every failure on the mat: “I can’t let this (lower belt rank) tap me! I must prove that I am worthy of this belt!” Or, conversely “I’ve got no real chance in this tournament, I just got this belt.” The negative effect of this should be apparent.

Either of these paradigms can happen, and often we might glide between the two. Sometimes too much, sometimes too little. Hopefully, most of us spend more time in the “just right” spot.

So, you got promoted. Now what? Well, never mind our own expectations, everyone around us will have certain expectations as well. These expectations will usually fail to be accurate, since each of us is a unique individual with unique game, flow, abilities, etc. Generally though, expectations will fall into category A or B.

One of the great things about our community is the tight bond we all share with each other. But, along with that, comes the importance of others opinions of us. We all feel great when a certain coach or respected competitor tells us how nice our x-guard sweep was or how he “couldn’t get passed our De La Riva” or whatnot. But how do we feel when we hear remarks like “Really, they gave him his ____belt?” Now, I recognize that this is petty behavior and maybe it’s only my paranoia or inferiority complex that lends me to believe that this sort of thing happens but…would you believe I have actually heard this? Maybe you have too. It’s insulting and petty, but it happens. Someone has a certain opinion of your jiu-jitsu and then they suddenly blame your promotion on you!

Category B: “It’s about time…that guy has been sandbagging for a year now.” …Doh! Seriously?! Like it is your fault that your professor a) has high expectations of you b) has high expectations of everyone c) was waiting for the right time d) was purposely sandbagging you for the next Mundials, etc.? Whatever the reason, your professor promoted you when he wanted to. It wasn’t your choice of when to be promoted.

Okay, so what is GOOD about getting promoted? Why have belt ranks at all?!

Well, that is a great question and the answer might not be what you think it is. In the end, after breaking down all of the cause / effects of a new belt there is only one really good reason for it: To grow Jiu-Jitsu!

Not just your jiu-jitsu, but everyone else’s jiu-jitsu as well. Your professor has recognized the following things about you and your Jiu-Jitsu game:

1) Your BJJ is too good to keep competing with the other ________belts. Your Professor realizes that your game has exceeded the average abilities of the other _______ belts around you. He knows that if you continue to roll, train, compete with other players of this level your game will not evolve or grow in an upwardly mobile fashion. It is with the best interest of your game that he has moved you into a more competitive / appropriate bracket. A good Professor cares about your jiu-jitsu and is looking out for your growth. Professor has realized that, for your sake, it is time to move you into a more advanced tier.

2) Your BJJ is too good to keep competing with the other _______ belts. Yep, I said it twice! Your professor realizes that if he keeps putting you in the same bracket, your advanced game will stifle the game of those with which you are competing, training, rolling. Your game has improved to the point that putting you in that same old bracket is just plain unfair to the others in the bracket. Your game is simply good enough to allow you to steam roll your partners / competitors. Leaving you in this bracket will let you rack up medals, sure, but a good Professor cares about Jiu-jitsu. Not just his jiu-jitsu, or your jiu-jitsu, but Brazilian Jiu-Jitsu as a whole. he knows that allowing you to steam roll your competition will stifle the growth of the players around you. They won’t be able to experiment, try new things, and grow their jiu-jitsu because they will simply be struggling to survive your now advanced skills.

In summary, your belt rank is simply something best left to the concern of your professor. It is his/her burden to decide when you must be advanced. It is really all about the growth of our beloved sport!

it is NOT a reward, NOT a validation of your value, and NOT a trophy to be bragged about. If you allow yourself to start thinking of it like that you will start putting up roadblocks to your continued growth in BJJ. You will start thinking “I should have gotten promoted!” or “When am I getting promoted?” Once you start down that road you are no longer thinking about “What can I do differently in my guard retention?” (which leads to growth in your BJJ) but, instead, “I’ve got to tap this higher belt to PROVE that I should get promoted!” (which doesn’t lead to growth).

My advice: Love the game! Play the game! Dream about jiu-jitsu at night, day dream about it during the day. Maybe call-in sick and head to a lunch class at the gym. Enjoy what you are DOING, and don’t worry about where you are GOING, that is your Professor’s job. Let him carry that weight. A great Professor will gladly do that, and does so because he loves BJJ, just like you do. So, remember, the next time you are lined up and those stripes are sticking to the wall: it’s about Jiu-Jitsu, it’s not about you. If you can just focus on what you are doing, you will end up where you want to be…guaranteed!