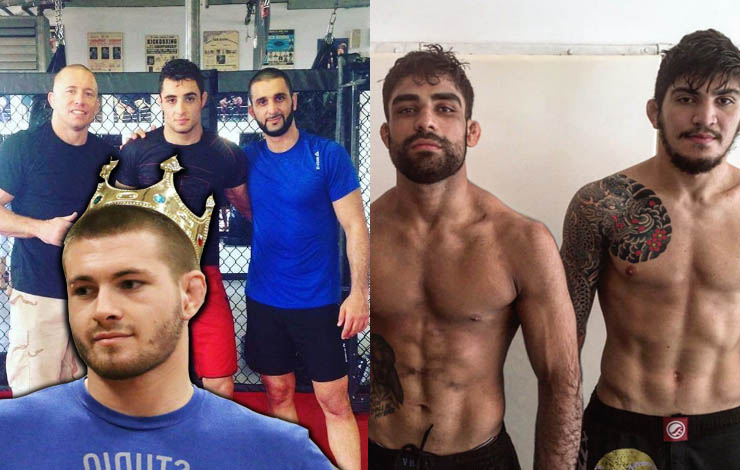 ADCC North American trials were quite interesting across the board but at least as much interest has been gathered around the Dillon Danis altercation with the Danaher Death Squad members.

A conflict was inevitable as soon as it was announced that Mansher Munchie Khera will be going up in the finals against one of the youngest members of the Danaher squad – Oliver Taza. Taza is a brown belt Who trains at Tristar and at Renzo Gracie NY.

The 77 kg finals were one of the most interesting bouts of the entire tournament. The fighters were cornered by Gordon Ryan and Dillon Danis respectively. The two coaches exchanged barbs during the match. Sadly for Taza, Munchie was never in quite too much trouble and secured a points victory, final score was 3-0.

After the victor was declared Dillon declined to shake hands with Ryan. This isn’t much of a surprise because Ryan has been very provocative toward him for quite a while now.

Sponsor Backs Out Due To Gordon Ryan Being Disrespectful, More Changes

Never the less Tonon piped his 2 cents worth on the situation:

Much respect Munchie today for winning ADCC trials and beating our teammate Oliver Taza in the finals. I’m sorry I did not get a chance to shake his hand. Dillon did not want to shake our hands after the contest, which is his right, and I understand his position because we definitely talk shit about him and his teammates publicly. Understand this, I don’t want to be Dillon’s friend, I Don’t like him, I don’t like his additude, general mentality about competition, nor how seriously he takes himself. I also don’t like that his teammates have declined Matches with myself and Gordon on numerous occasions but still like to act like they are the shit. I feel relatively similar about Munch and Mathieus, Munch is obviously the most level headed of the three. Despite all of this myself and Gordon are still willing to shake hands with our rivals after a contest has been completed. Dillon is not, which is fine, but then if you have such a problem with Gordon that you can’t shake his hand, then have a match with him, prove you are his superior, make him bow to your achievement. That’s just how I feel. If Dillon thinks that my opinion is worth fighting over I’d be more than happy to enter any MMA promotion and fight with him, or have a rematch with him in jiu jitsu if it will make him feel better. Either way, I guarantee you I will extend my hand to him after we Compete regardless of result. My apologies for any and all unprofessionalism I showed today at ADCC. Oh and one last thing, this is to anyone we talk shit to or about who gets legitimately butthurt, hey Morons we’re helping you make money off the sport, say thank you, goodnight:*

Gordon Ryan got his own prediction for the fight against Dillon Danis:

“Prediction. I treat dillon like my child. I will put 60k against Dillon Danis 20k no time sub only no gi #bowtotheking #iwilltakeyoursoul”