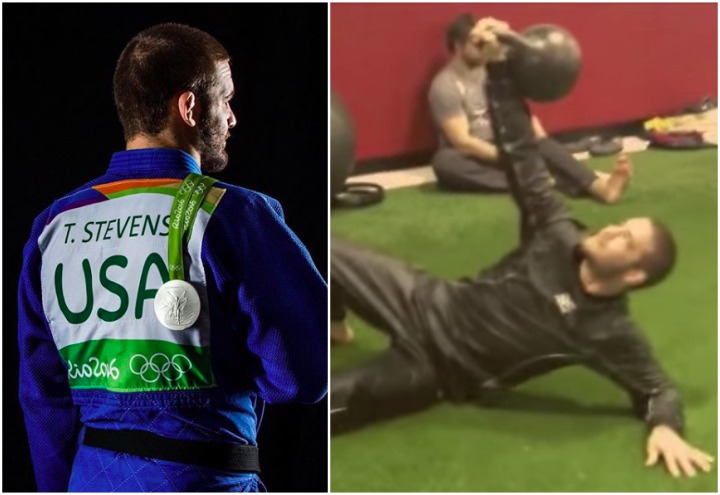 There are several factors that determine the success (ability to submit and not be submitted) of the jiujitsu practitioner: technique, strength, speed, aerobic conditioning, and bodyweight. Technique is more important than any other factor in jiujitsu, but jiujitsu is highly dependent on strength as well. Strength will not make a trainee better at technique, but it will make surviving and submitting easier and could mean the difference between winning and losing a competition.

One might argue that increasing a trainee’s bench press or squat will not benefit their grappling. There are several objections that are common rhetoric in the jiujitsu community which are in some cases intuitive, but misguided.

“Who cares what you can squat? Technique beats strength every time.”

Technique is, of course, the most important factor in success in jiujitsu, but given the same skill level, the stronger, bigger trainee will prevail. The bigger, stronger trainee will be able to hold positions longer and apply chokes and submissions with higher force which will facilitate them displaying their technique effectively.

Certain exercises like squats do not mimic jiujitsu exercises, and intuitively, this may make them seem useless in jiujitsu. Effective strength exercises use a large amount of muscles over a large range of motion to move heavy weights. The method to achieve a 500lb squat will produce strong legs and a strong back which will facilitate hip tosses, takedown shooting, rolling, finishing an armbar, and a host of other movements. Just because a squat doesn’t look like an armbar doesn’t mean a squat won’t get the muscles used in an armbar strong.

“Strength training is all about your one rep max. In jiujitsu, you have to have muscular endurance and be able to push a small amount of force many times, not just once”

Muscular endurance is certainly important in jiujitsu, but maximal strength contributes to muscular endurance. Jiujitsu is a series of single power and force output events followed by brief rest: a trainee might need to push or pull with a force of 200lb once and then rest for ten seconds and do that roughly 20-100 times in a roll. Fundamentally, this process is a series of submaximal muscle contractions performed repeatedly. Intuitively, this line of thinking supports the quoted assertion. However, it’s important to recognize that the more submaximal a contraction is, the higher number of times it can be performed before muscular fatigue occurs. If a trainee bench presses an opponent to get into another position and must apply a force of 200lb, they must be able to bench press at least 200lb. If their bench press one rep max is 222lb, they may only be able to do this motion a few times before they fatigue, because the force required is 90% of their one rep max. If, however, their bench press one rep max is 500lb, they will be able to push with a force of 200lb many times over the period of a roll, because this force is now 40% of their one rep max.

This is not to say that endurance training would not benefit a jiujitsu practitioner; conditioning the glycolytic and aerobic energy systems (the energy that comes from ten seconds or more of muscular contraction) will allow the muscles to be efficiently fueled by the body to perform the work required. However, no amount of glycolytic and aerobic conditioning will allow someone with a 222lb max bench press to bench press 200lb twenty times. The idea that having more muscle will necessarily slow you down or make you tired faster is an anecdotal assertion. There are two primary reasons for this observed correlation. The first is that the strength trainee has neglected their aerobic training. This can be done in collaboration with their strength training and jiujitsu and does not require a large amount of time (twenty minutes, three times a week should be enough). The second reason strength trainees may get tired at jiujitsu sooner is that they are fatigued from lifting. This is hard to balance and may be a perceived detriment to jiujitsu training.

Additionally, if someone is attempting to lose weight and do jiujitsu and strength train, this will certainly make them tired during rolling. The ability to recover is difficult in a state of caloric deficit, and caloric intake is important in energy output during exercise.

Contrary to popular belief, it does not take a long time in the gym to get strong. 15 hours a week with five days a week in the gym is unnecessary at best and counter-productive at worst. For a trainee new to strength training, five to six hours a week in the gym will be enough with a well designed barbell program and limited talking in between sets. If someone is doing jiujitsu every day and working 60 hours a week, this will be difficult, but for most people, this is easily manageable.

While technique is absolutely essential, gaining strength will increase the ease with which submissions are performed, competitions are won, and fights are won. Producing force is a fundamental component of human existence and to not capitalize on that aspect of life is short sighted.

Finally, there are still many different types of deadlifts that I might haven’t even known. So, tell me what you think in the comments and let me know your favorite way to deadlift! I will be appreciated to hear from you.